Peter Quill continues his endearingly small-sized adventures on Earth. (Small in scope, he’s not, like, Ant-Man powered all of a sudden or anything.) (Minor spoilers follow below.) 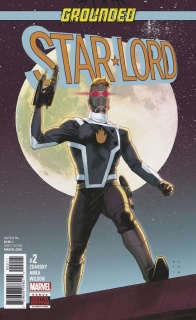 GROUNDED! Peter Quill has seen all the dangers the galaxy has to offer…but has he ever had to face…COMMUNITY SERVICE???

Marvel’s in a bit of a strange bind these days. On one end of the universe, giant events blot out the sun and ingest dozens of books, rarely taking a moment to breathe before the next one starts. On the other end, there are books that perfectly capture what’s always been wonderful about the Marvel Universe and what in many ways is being done better now than it ever has been: telling stories about Superheroes that feel like they could be happening right outside. Comics and their creators have evolved their storytelling over the years and now, a book about a big time superhero leisurely walking around New Jersey doesn’t feel so strange. Unfortunately, the very real weight of event fatigue on the Marvel Universe may threaten to squelch more interesting but quieter books before they’re given a chance to flourish.

To be fair, however, “Star-Lord” is a comic that likely wouldn’t exist (at least not with this particular premise) without the events of the most recent event, “Civil War II”. In that book, the Guardians of the Galaxy came to Earth to help out Captain Marvel, at which point The Vision blew up their ship. Now they’re all stuck on Earth.

It’s actually led to several good comics, besides this one. Rocket Raccoon’s latest solo endeavor feels fresher than his previous, what, twelve new solo books? And Brian Michael Bendis started the post-CWII adventures of the Guardians with a solo Thing story that was one of the best the character had seen in quite some time. So overall it’s feeling like a good move for the characters, but Chip Zdarsky and Kris Anka seem to have the most entertaining grasp on this new status quo.

They’ve slowed down the pace and allowed the consequences of even the smallest act play out at its own pace, which lets the book linger on the kinds of details that really make the Marvel Universe conceit work. This issue, after all, revolves mostly around an afternoon walk between Peter Quill and an old man he has been court ordered to spend a few hours with.

Sure, over the course of those hours, they happen upon a bank robbery, and Star-Lord teams up with Ms. Marvel, but, I mean, it is still a comic book. Ms. Marvel’s appearance hearkens back to many of the things that made Zdarsky’s “Howard The Duck” so great. He’s adept at creating a unique and atypical world and then bringing in an established character and letting them bounce around in it. This world feels very different from Howard’s though. Zany has been replaced by, well, a little zaniness, but more of the kind of tone you’d find in a movie like “Cyrus”. It’s funny, but it also feels genuine. (You have no idea how hard it’s been to not use the word “grounded” in this review.)

Zdarsky is joined by artist Kris Anka and Matthew Wilson as colorist, both of whom have created a fantastically great looking book. For a book that’s a little less high flying than some of his previous work, Anka delivers some of his most dynamic art ever. He’s always been great at acting and costume design, but he’s starting to loosen up his cartooning as well, leading to some great looking characters and phenomenally acrobatic action sequences. His skills at capturing reaction and emotion are also used to great effect in this issue, whether it’s a thrilled Peter dodging a jail sentence or a frustrated old man who’d rather just be sitting down at home. Wilson keeps everything looking true to life, even when brightly colored bank robbers are out causing trouble.

Zdarsky has made a name for himself as one of the funniest people in comics (and on Twitter), but like most genuinely funny people, he has an awareness of the human condition that makes him an excellent developer of character. “Star-Lord” is just getting started, but it feels like no other book on the stands. It’s happy to take things slow but still keep the reader engaged, and has a strong voice and point of view. Like most of Zdarsky’s work, it also has a ton of heart.

The issue ends with the introduction of a legitimately interesting new status quo for Peter, proving that taking a rich character out of an exciting existence never has to be boring.

Final Verdict: 8.7 – Kris Anka reaches new heights and Chip Zdarsky continues to prove himself one of the most versatile writers in comics, as Peter Quill adjusts to life on the ground.