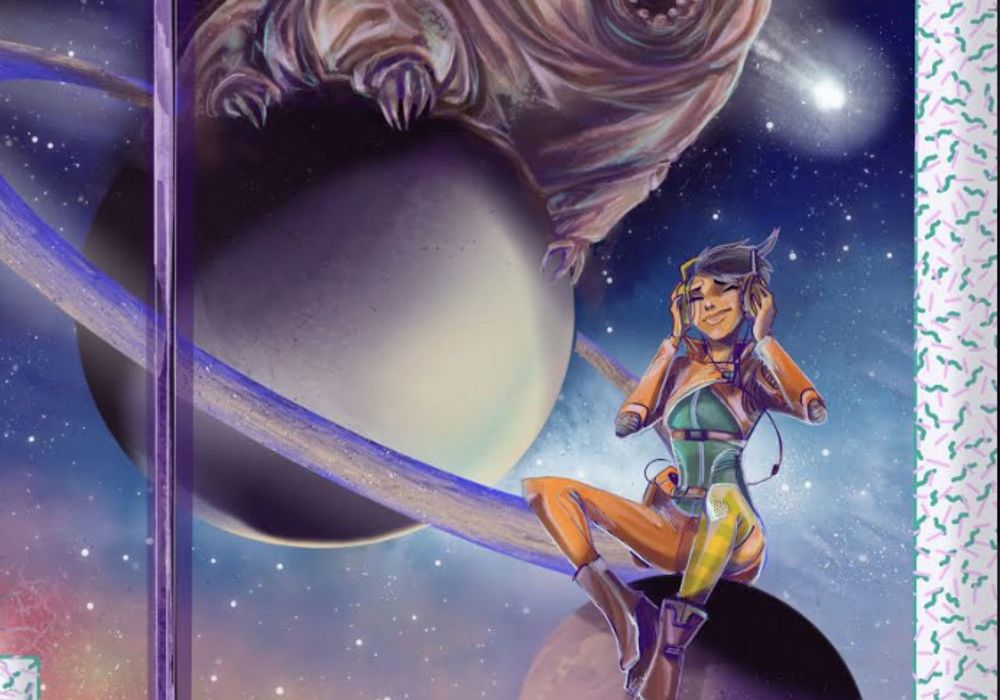 From the very beginning, “Star Pig” #1 lets the reader know that it is something special. The title is enough to draw the curiosity of anyone browsing the shelves of their local comic book store or looking for something to read online.

It’s one of the best titles in modern comics, and it does a fantastic job of drawing the reader into a great story. 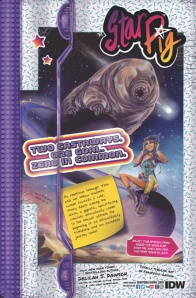 Like many late-21st-century teens, geeky 16-year-old Vess gets packed off to spend her summer at Space Camp—which is literally in space. Tragically, a shuttle accident sends her and the rest of the passengers careening toward a cold, frosty death among the stars. But when a gigantic, space-faring water bear miraculously rescues Vess and her beloved retro Discman, it’s the beginning of an extraordinary friendship and an incredible journey home, all set to the nostalgic tunes of Vess’s 1990s-heavy playlist.

“Star Pig” #1 opens with a literal bang when a space ship carrying a group of kids on a school strip collides with an asteroid and sends sixteen year old Vess hurtling into the void of space, along with all of her classmates. Fortunately, she is rescued at the last minute by a massive pink and sentient tardigrade and discovers that aliens exist who can help her get back home.

There are a couple of problems in the beginning of the comic that can be a little bit distracting. For starters, it’s kind of curious that human society has developed long range space travel that is safe enough for school field trips and hasn’t already discovered that aliens exist. Also, it seems highly improbable that Vess would be the only survivor of the accident, especially since she wasn’t wearing a seat belt and was thrown into the void of space without warning or protection. It’s a massive coincidence that the tardigrade was there to saver her when it did.

Speaking of the tardigrade, the choice to make Vess’ animal companion a sentient tardigrade is an inspired choice, it’s also kind of strange. While tardigrades are real life animals that are capable of surviving the vacuum of space, they’re supposed to be microscopic and definitely not pink. They’re also known as ‘water bears’ on Earth, which makes the choice to call the comic “Star Pig” instead of “Star Bear” a bit confusing.

Still, these are very tiny nitpicks that can easily be ignored because it’s the start of a story with wonderful characters, fantastic writing, and great art.

While the story is set into motion with an incredibly violent and terrifying space collision, “Star Pig” #1 treats the trauma of the event with dignity and understanding. Writer Delilah S. Dawson treats Vess like a believable teenager who is justifiably freaked out and developing a severe bout of survivors guilt while it is hinted that the water bear has suffered unimaginable trauma at the hands of unknown masters.

Since both main characters have a lot of pain to process, it would be easy for the issue to get bogged down and wallow in misery. However, just because both characters are suffering doesn’t mean they have to be sad all the time. While Vess may be struggling to cope with her situation, it doesn’t stop her from being curious and asking questions and being curious while the water bear itself looks and reads like a massive, innocent, and kind hearted teddy bear who will do anything to protect its friends.

While the main focus of “Star Pig” #1 is on Vess and the water bear’s relationship, there is still an entire universe to explore and establish. The rest of the story and setting is given just enough time and attention to make it believable and engaging to the audience and the issue manages to be entertaining on its own while making the reader curious to see what happens next.

The artwork of “Star Pig” #1 accomplishes the difficult task of being accessible to young and old readers while creating a look that is all its own. Artist Francesco Gaston delivers line art that uses a realistic art style with a touch of cartoonish elements that make the art expressive and accessible. This combines with Sebastian Cheng’s bright and cheerful colors that make this a book that children from the ages of 8-12 will enjoy, and that parents won’t mind buying for them. The art’s ability to make the trauma and emotions of a horrific tragedy easy to digest and process is impressive and well done.

But the true star of “Star Pig” #1 is the dialogue. Delilah S. Dawson give the human a kind of slang that is both understandable and believable for kids in a futuristic society; and the tardigrade is written with a sort of child-like innocence to it that makes him feel very sweet, sympathetic, and kind.

All of the things listed above: the story, the cartoony and colorful artwork, and the whip smart dialogue combine to create something wonderful.

“Star Pig” #1 is a fun, charming, and surprisingly deep comic that somehow makes the reader forget that it’s dealing with themes of grief and loss and looks like it’s turning into an exciting deep space road trip movie with a girl and her new strange pet water bear. I can’t wait to see what happens next.

Final Verdict: 8.2 A wonderful comic with great characters and tons of heart; but if there aren’t plans for a Space Pig plushie in the near future…I will be very disappointed.