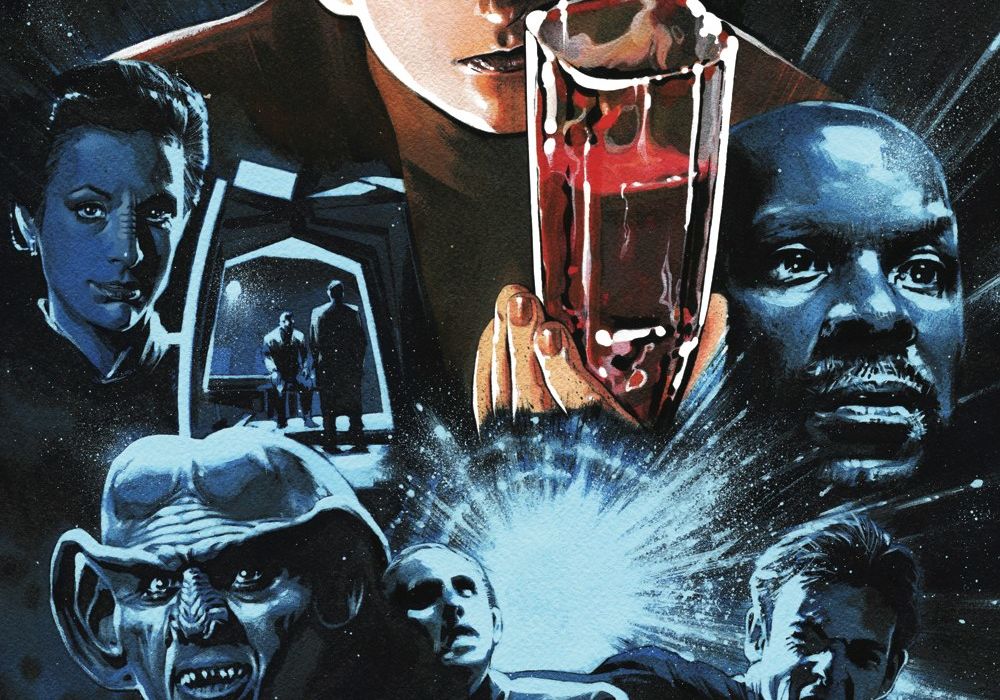 Odo comes to a dark and upsetting revelation as he and Betazed investigator, Retlaw close in on the person committing brutal murders throughout Deep Space Nine. The four issue miniseries “Too Long A Sacrifice” comes to a harrowing and deadly close this week. Mild Spoilers Ahead 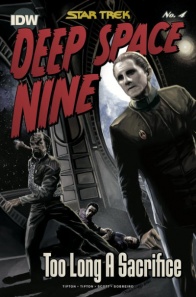 Issue four opens with Odo and Retlaw at a total loss. With multiple deaths under their investigation, they seem to be just going in circles with their suspects, or lack there of. Odo accuses the Vedek of being the killer, and asks Retlaw to empathically scan him. Retlaw does so and immediately knows beyond a shadow of a doubt that the Vedek had no hand in it.

Understandably angry, the Vedek reminds Odo that he too was on Bajor and the station during the Cardassian occupation and while he endured terrible things, he could never hurt anyone, even Cardassian sympathizers, especially Bajoran ones. He knows people did what they had to to survive in those circumstances and he can’t completely fault them for it.

Odo decides there is only one thing to do to clear their minds and reset themselves to continue their hunt for the killer: grab a good lunch. It is at this point that events begin snowball and they not only discover the killer, but their motive, and all the events leading to the deaths and the consequences birthed from equally horrific moments during the occupation. With a Betazed assisting with the investigation it was only a brief matter of time before the truth came to light and while the reveal of the killer makes total sense, and happens early enough in this issue to give us plenty of action and suspense to hold us over until the grand finale, it does feel a tad bit deus ex machina to have Retlaw in it at all.

Over the seven seasons of Star Trek: Deep Space Nine it was made clear that Odo was an effective ‘constable,’ but we rarely got a plot such as this one in the show. So while it absolutely makes for an intriguing story to have a crime that Odo is finding impossible to solve, it would have been nice to see him be the one who cracks it in the end. If there are plans for future Deep Space Nine comics, I would gladly read a series of mini crime arcs with Odo at the center (and plenty of the other crew members).

The Tiptons’s writing has been great throughout this miniseries and issue 4’s script is no different. This feels like Deep Space Nine through and through. Every beloved character has their voice represented. Their dialogue is true to them specifically and for the new characters created specifically for this series, they too have a distinct life of their own. The authors bring everyone to life rather than simply multiplying their own voices across well established characters. Even with my criticism of how the character of Retlaw is used, I still found him interesting and enjoyed his presence in the story. I could see him being played by Brian Cox. It was also nice to see another Betazed outside of Deanna or Lwaxana Troi at the center of a mystery.

These writers know their Trek, especially DS9, and if nothing else, they truly nailed the tone of it overall. Thankfully they did more than just that. “Too Long A Sacrifice” is an exciting and fully engaging murder mystery with all the main characters present in one way or another, with a handful at the forefront. And setting the story during the show’s sixth season still allowed for the backdrop of the Dominion War and the true evil of the Cardassian Empire to loom like a shadow over the story. The bleakness of this story works extremely well in that time frame of the show and on its own. I could easily recommend this to any teen to adult fan of the series, but younger fans would probably find it hard to enjoy and fully appreciate.

Greg Scott’s artwork fully captures the look of the characters. He fully realizes the likenesses of the actors, down to the finest details. Even their typical movements and mannerisms are fully drawn. Everything about them is taken into account. He also knows when to really dig into the details and when to pull back, giving the characters and scenery a less finely attuned look, similar to a roto-scope animation style. Both approaches work and he moves seamlessly between the two styles to get the emotions and storytelling across as it should be from panel to panel.

Sobreiro’s colors work the same way as the illustrations. He brings this world to life with an accurate palette matching the look of the show, but is still able to take some artistic license with how things are presented. The changes he makes to convey powerful emotions or a change in time – for the various flashback moments, it is all done in a way that feels true to Deep Space Nine without necessarily being something we ever saw when the series aired.

Overall “Too Long A Sacrifice” is a well crafted, and well told mystery that stands on its own while being intrinsically tied to the heart of Deep Space Nine. Issue #4 was a very good and proper ending to it and it can easily be recommended to long time fans. It was incredibly fun to see these characters again outside of bingeing the series for the tenth time. With the passing of René Auberjonois nearly a year ago, it was especially nice to see Odo again and have him be faithfully written in a way that, I believe, René would be proud of and enjoy to see.

Final Verdict: 7.5, A satisfying ending to a dark and wild whodunit and an exciting and enjoyable return to the world of Star Trek: Deep Space Nine.