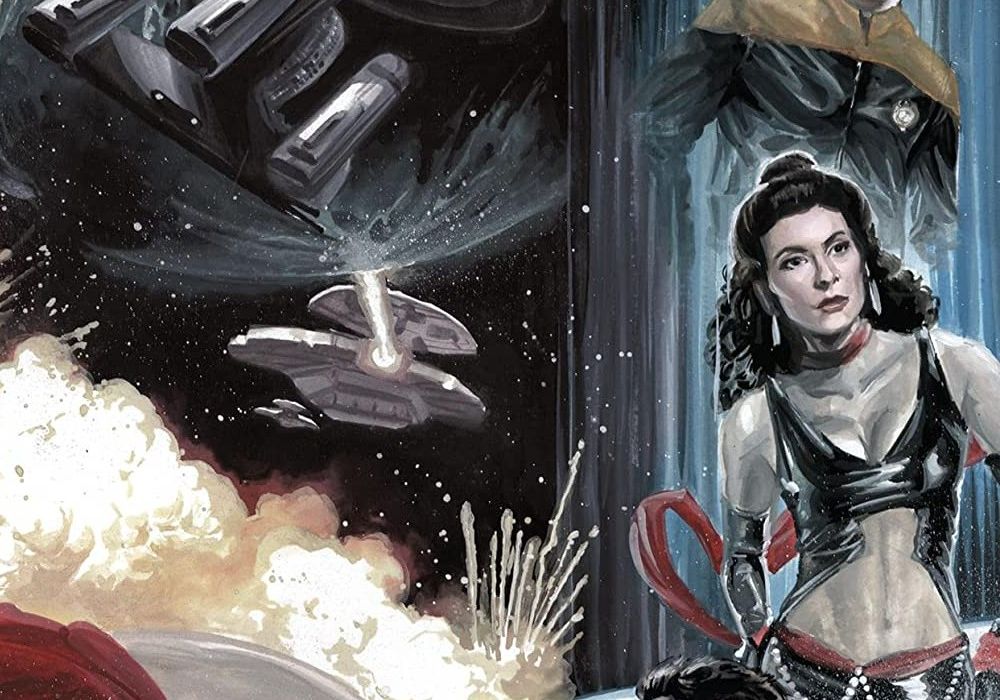 In the alternate dimension known as “The Mirror Universe,” The Terran Empire continues its power struggle with the Klingon-Cardassian Alliance. 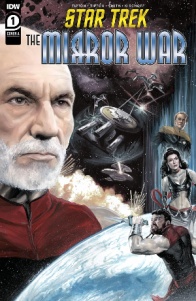 This miniseries continues the on-going arcs of Mirror Universe stories set during the Star Trek: The Next Generation era. During the waning days of the Terran Empire, Captain Jean Luc Picard of the I.S.S. Enterprise-D made an unsuccessful attempt to take over the Prime Universe’s Enterprise, thus starting his own armada to take on those who wish to oppose him and his crew. After retreating back to their own universe, Reginald Barclay was temporarily trapped in the Prime Universe. This lead to Picard and the rest of the senior officers wary of Barclay’s intentions. Picard has become more desperate than ever.

Right from page one the Tiptons have thrown us into a taught power play conversation with bad guys and badder guys. Picard and an Andorian crew member have come to see a man named Rogers about a favor. It’s a very cliche opening sequence, but it’s so fun to see it play out here, especially with a version of a character who is normally portrayed as a genuine hero. Things go sideways, as expected, and the Andorian, who is actually Commander Data in disguise uses his Borg-ified arm cannon to blow holes through their enemies, including Rogers. It is an incredibly fun and energetic opening sequence which ultimately leads to a cut-away to an equally tense, but much quieter scene involving Barclay’s interrogation with Counselor Troi. It also takes its cues from spy thrillers and from here the issue spins off into multiple callbacks and throwbacks to espionage and heist stories of all kinds. The Mirror Universe is a sandbox that adheres to its own set of rules while allowing creators to use our beloved heroes in many nefarious ways, sometimes for real terror, sometimes for purposefully corny scenes.

This issue uses both to great effect. Having written quite a few Trek comics over the years, including a couple Mirror Universe tie-ins, the Tiptons definitely know their way around “Star Trek” canon and the characters. Dialogue is tight and to the point. It is wholly descriptive and in-depth as any Trekkie knows the dialogue to be, but because we are getting the bad versions, they are a bit more direct, using force over their words most of the time. However, their words are just as treacherous and dangerous as their physical actions tend to be. That’s the fun thing about the use of the Mirror Universe in various iterations of Trek. It’s a whole dimension of over-zealous antitheses of the characters we know, who are basically a mix of planet conquering warriors and James Bond villains. They need to be just scary enough for the audience to know who they are dealing with, but with that thin layer of cheese that keeps the charm and just barely there hokey style that seeps into all of Star Trek to keep things fun.

The Tiptons keep the issue rolling along a good clip while giving us a slew of story beats propelling the plot along while occasionally calling back to recent previous miniseries or specific issues. This new starting point mostly stands well enough on its own that the references aren’t completely needed. However it spends a good amount of time filling in what happened with Mirror Barclay before he could transport himself back to his own universe. Its biggest demerit is referencing an event from “The Mirror War” #0. 0 numbered issues should be used as a means of getting people excited about an upcoming story line, not include a crucial piece of information or something of important relevance for what is to come. The writing is definitely strong throughout the issue, but a throw-away reference was made to feel like an ad for getting that preview issue.

The violence in the issue is nothing we haven’t seen somewhere in the Trek canon so for those wondering if it’s too adult for the young Trekkie in their family, they should be OK with this. There are a lot of fun easter eggs and winks to those out there who know their TNG backwards and forwards, but thankfully nothing gets in the way of the story. As a life-long Trekkie who has never been in love with the Mirror Universe, but has come to appreciate it more in recent years, the writing in this issue really gave me something I was looking for in terms of this kind of story. As the plot shifts from generic action to heist thriller, I could not help but get drawn in even more than I already had been. Seeing these characters written this way was something I didn’t know I needed. And for those Deep Space Nine fans out there, seeing a pre-Smiley, Miles O’Brien working on the Enterprise is really funny. His sequence is both typical Mirror Universe dark humor mixed with Jon Adams’s beloved web comic, “Chief O’Brien At Work.”

Gavin Smith gets to explore and expand the canon as well. While he has to stick to some of the established character models for the Mirror Universe, it feels like he takes a few more risks with fleshing out the world, than most artists working on Trek books tend to do. A franchise like this can be tough to work within, when actor likenesses are so key to how the characters must be drawn, and the world is something established through t.v. and film over the last 55 years. So while we are in an alternate reality, many of those rules still apply. Smith does a great job with it all, and while there is nothing ground-breaking, it still feels like “Star Trek,” or at least this version of it. The character designs are definitely the most bonkers thing about the art; in a good way. Colorist Charlie Kirchoff is probably under more restrictions than Smith, but he makes everything look great. This is “Star Trek.” The palettes are perfectly recreated. Overall, the work is competent, even if it isn’t something new or truly mind-blowing. It all works for the world it is portraying.

This is a much stronger re-entry to the Mirror Universe than I expected. It is a real page turner allowing for a lot of excitement and joy to be had with this wild adventure. Those who have been following along with the recent Mirror stories, or those jumping on now will have plenty to enjoy. It will have you looking for the next issue immediately.

Final Verdict: 7.5, Star Trek does a heist in the Mirror Universe? It’s just a silly and entertaining as it sounds.