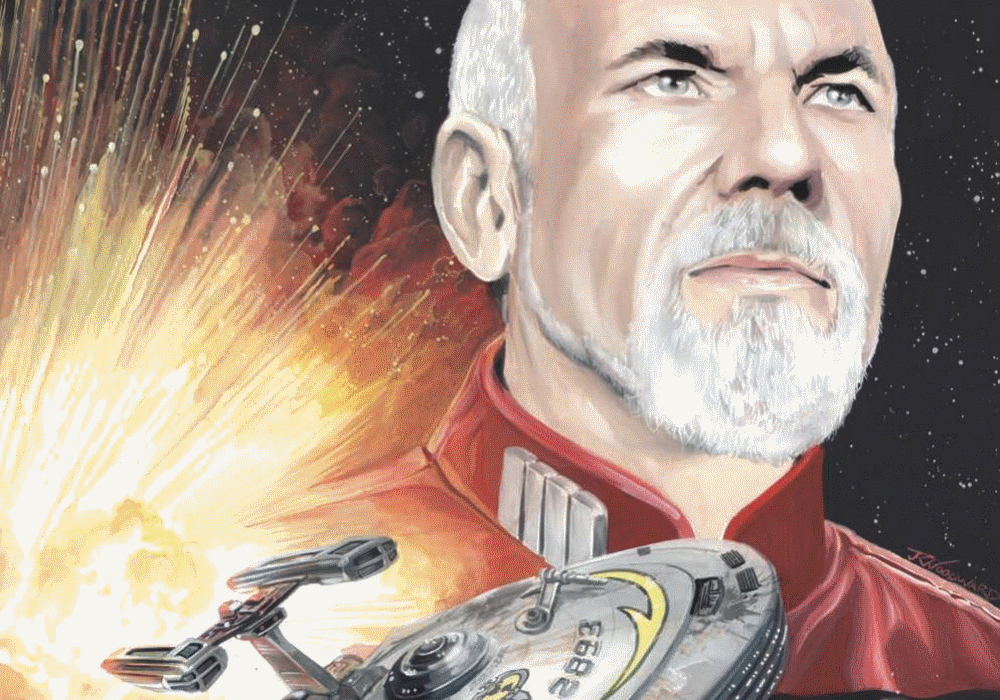 “Space… The final frontier. These are the voyages of the I.S.S. Enterprise. It’s continuing mission: to conquer strange new worlds, to enslave new life, and new civilizations… To boldly go where no one has gone before!” 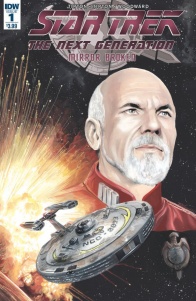 Cover by J.K. Woodward
Written by David Tipton & Scott Tipton
Illustrated and Colored by J.K. Woodward
Lettered by AndWorld Design
The Star Trek mini-series event of the year kicks off! Captain Jean-Luc Picard will stop at nothing to get his hands on the Empire’s newest warship, the I.S.S. Enterprise, be it lies, deception…or murder. With enemies and allies around every corner, Picard’s quest to help the Enterprise and restore the Empire to glory will not be an easy one. Good thing he has a crew onboard who will also stop at nothing to ensure total victory – at any cost.

The Mirror Universe is one of the most classic conceits in all of Star Trek. By looking at our heroes in the darkest timeline, evil facial hair and all, we get to see a new side to the familiar, and also the things that will never change. This first issue is a real treat for Trekkers of all generations, but some art issues hold it back from being a true must read. No disrespect meant to J.K. Woodward. His moody, painterly style works wonderfully in “Fallen Angel” and some of his other Trek work has been spot on. Woodward is clearly a big Trek fan, and details like the the ship designation for the I.S.S. Stargazer (NCC 2893) or the Mirror Universe 24th century captain’s chair designs are perfectly spot on. Lt. LaForge’s evil facial hair and visor is similarly perfect, paying tribute to styles he has worn throughout the franchise.

Where he loses me is on conveying a sense of motion. That’s not always a deal-breaker, but in a space opera such as this, things are constantly moving at warp factor 10. Despite gorgeously colored motion lines, the Stargazer in motion looks like a still painting; same with the subsequent battle it has with a Galor-Class Cardassian Cruiser. A panel of Mr. Data’s fingers furiously typing on the console forced a double take- I thought he was missing fingers, and read the next few pages wondering if they were going to explain what evil torture he had been subjected to in this timeline. I went back a realized no, they were just supposed to be moving quickly. It was honestly hard to tell.

That’s a shame, because there’s a lot to like in the issue. I for one, was delighted that Reg Barclay was part of evil Captain Picard’s crew, and that in the mirror universe he’s a sniveling weasel instead of a misunderstood genius. Likewise, Mirror Geordi LaForge is a smooth operator, taking risks and forcing deals within the Imperial bureaucracy. And Inquisitor Troi? She’s in a floor-length bondage gown, using her half-Betazoid powers to spy on and manipulate the crew. All the characterization is spot on.

I also enjoy the sense of destiny the Star Trek comics always give to Picard and the Enterprise. There have been a number of comics, including this one, where he is not in command of his beloved flagship, and the comics always allow the reader to assume that he will take back his ship, regardless of the universe. Nothing needs to be stated explicitly, because if you’re reading a Star Trek comic, it’s safe to assume you know that basic fact: Captain Picard will be in command of the Enterprise. It is his destiny.

That’s what makes the art issues such a shame. The design is so good, and its clear that every member of the creative team is comfortable operating in the Star Trek universe, moreover they are comfortable working in a specific iteration of that universe, expanding it beyond what we have seen. The costumes, the bridge, all of the locations really, even the minor props, just scream Star Trek but wrong, as the Mirror Universe should. The issue is even paced like an episode of the show, the cliffhanger ending being the first commercial break.

All in all, “Star Trek: The Next Generation: Mirror Broken” #1 is a decidedly mixed bag. The trouble I had with the art may not be a consensus opinion. Maybe you really like the way Woodward’s colors and brushwork resembles Alex Ross’s work. Maybe you’re such a fan of all things Star Trek you’ll get a big kick out of seeing the bridge of a Mirror Universe Constellation-Class starship. There’s a lot to like in “Star Trek: The Next Generation: Mirror Broken” #1 and if you let it, this mini-series is bound to take you to some strange new worlds.

Final Verdict: 6.8 – Static artwork holds back what would otherwise be a classic story in the Star Trek Mirror Universe.