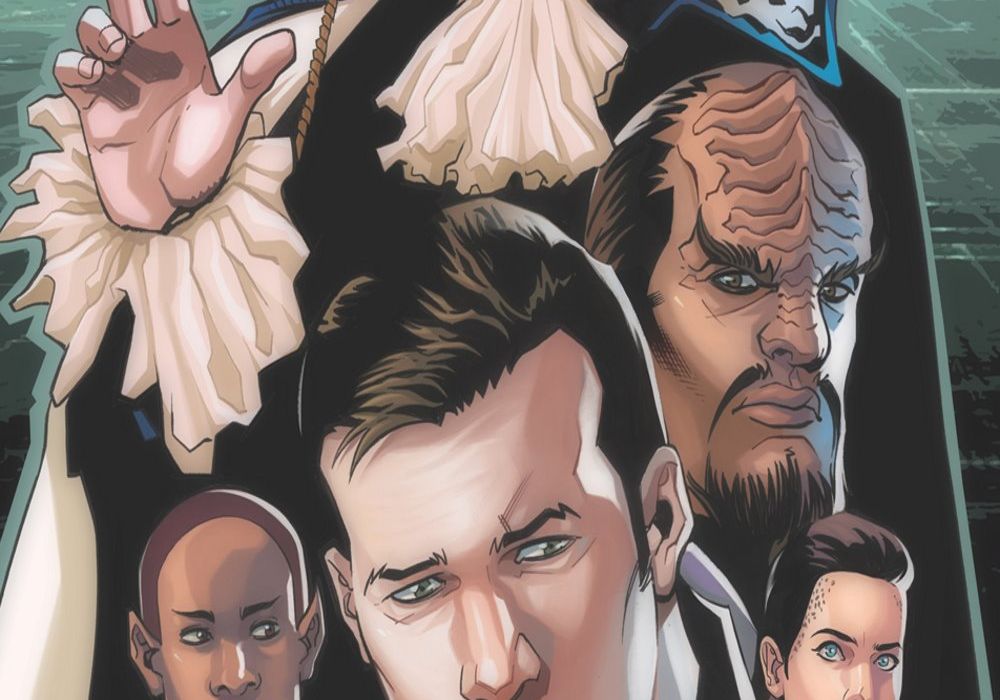 There are some fandom conversations that are stalwart, but dumb. I’m talking the likes of “who would win in a fight, Superman or Goku?” (The answer is that they would team up and have a really nice friend date.) “Star Trek: The Q Conflict” is based on one such question. In this case: “Who would your perfect bridge crew to serve on a Starfleet ship?” David and Scott Tipton are the nerds rising to the question and what they come up with is fan fiction of the highest degree. 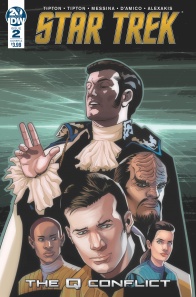 It’s Captain vs. Captain vs. Captain vs. Captain in the most high-stakes scavenger hunt the galaxy has ever seen as Picard, Kirk, Janeway, Sisko and their teams compete for the amusement of their godlike tormentors. The biggest Star Trek crossover event ever continues here!
The crew of The Original Series, The Next Generation, Voyager, and Deep Space Nine meet for the first time! Written by fan-favorite Star Trek scribes Scott & David Tipton! Each issue has two interconnected covers by David Messina in his return to Star Trek!

It’s kind of sad that the label of fan fiction gets thrown around in a derogatory sense. Though fanfic has its own strange conventions, they are not inherently worse than any other genre. The brothers Tipton embrace that. The fun in “Q Conflict” is watching how these disparate crews come together- or don’t. Finding the good character moments in this hugely bloated cast is what elevates this issue from feeling like some studio mandate. The Tiptons are passionate about their Trek fic.

So who is on each team? The captains each assemble a smaller groups for an away mission, and some crews are stronger than others. The clear winner is Captain Janeway, “Number One” Riker, Kira Nerys, and Ensign Pavel Andreievich Chekov. Voyager’s captain can be ruthless when she needs to be, and the same goes for Riker and Kira. They end up pulling some pretty aggressive moves, the kind of things most of the other captains are unwilling to do. Chekov smiles and nods and takes orders very well.

Also a strong crew: Captain James Tiberius Kirk, being backed by Miles O’Brien, Worf son of Mogh, and Tuvok. It turns out Kirk is so nice and easygoing that he wins over all of his new crewmates- including his new Klingon friend. By the end of the issue, Kirk and Worf have saved each others lives and are total bros.

Less competent is Captain Picard’s away team, which includes Mr. Spock, Constable Odo, and Geordi LaForge. Spock and Odo are too stiff and prickly to work together and are immediately at each others throats. Geordi wants to make everyone happy, but his eagerness to please doesn’t balance out the complicated group dynamic. And Picard may be the best Trek captain, but he’s too gentle to play any dirty tricks on his fellow Starfleet officers.

Finally we have the true disaster crew: Captain Sisko, Commander Data, Commander Chakotay, and Mr. Sulu. While the multi-talented android Data is sort of an ace in the hole, Sisko fails to be the leader his team needs. Chakotay doesn’t really bring anything unique to the table, and Sulu is taken off guard by the more aggressive officers.

Doesn’t that sound fun? To a Trekker, seeing these teams work together and fall apart is a dream. If you’re new to Trek… well this isn’t really a comic for new fans. Not every single character even gets named on page. The price of entry is at least passing familiarity with all of the many, many characters. There are some deep cuts from Trek lore too, including the other godlike alien beings competing with Q, and the prevalence of the Iconians. The issue is breezy enough that you don’t need to remember how the Iconians have played into Trek lore in the past, but if you recognize the references, it’s a treat.

Less fun is sorting out the minimalist artwork. I don’t envy any artist who needs to render thirty-two main characters (4 teams of 7, plus the 4 antagonists) for an entire issue. That’s daunting as hell. And for the most part, David Messina’s style works well for the kind of fun story “The Q Conflict” is trying to pull off. But it can be hard to tell some characters apart- Sisko and Geordi have similar facial hair and good luck distinguishing Sulu, Chekov, and Harry Kim (Harry has a grey undershirt). Some characters look like fun cartoon versions of themselves, like O’Brien and Seven of Nine. But some characters barely resemble their T V selves, particularly Doctors Crusher and Troi. Since so much of the fun comes from recognition, it sort of sucks that it can be so hard to do that very thing.

Messina also cuts corners with details sometimes. I can more or less forgive that in big crowd scenes, but there are a couple of action panels where he drops the ball on important things. One panel of Sisko’s crew running away from some monsters has no faces at all, which is perplexing considering how prominently the characters are placed in the panel. In that same sequence, Chakotay seems to be replaced by Odo… even though Odo is on Team Picard. It’s just another strike against keeping the many, many characters straight.

It’s hard to ruin such a winning premise though. As I said at the top, making your perfect Trek crew is a time-honored Trekkie exercise. (For the record, my team would be: Picard as Captain, Spock as First Officer, Stamets as Science Officer, O’Brien as Chief Engineer, Hoshi Sato on Communications, Nog at the Helm, Barclay doing Navigation, The Emergency Medical Hologram as Doctor, Tasha Yar as Security Chief, and Data tending bar.) The Tipton brothers have a love for Trek, and they know how to script a comic. Sometimes the art is less than serviceable, but “The Q Conflict” #2 is too fun to be tanked by a few shaky elements.

Final Verdict: 7.0 – Fun fan fiction like this is hard to come by and hard to stay mad at, even with some pretty major art issues.