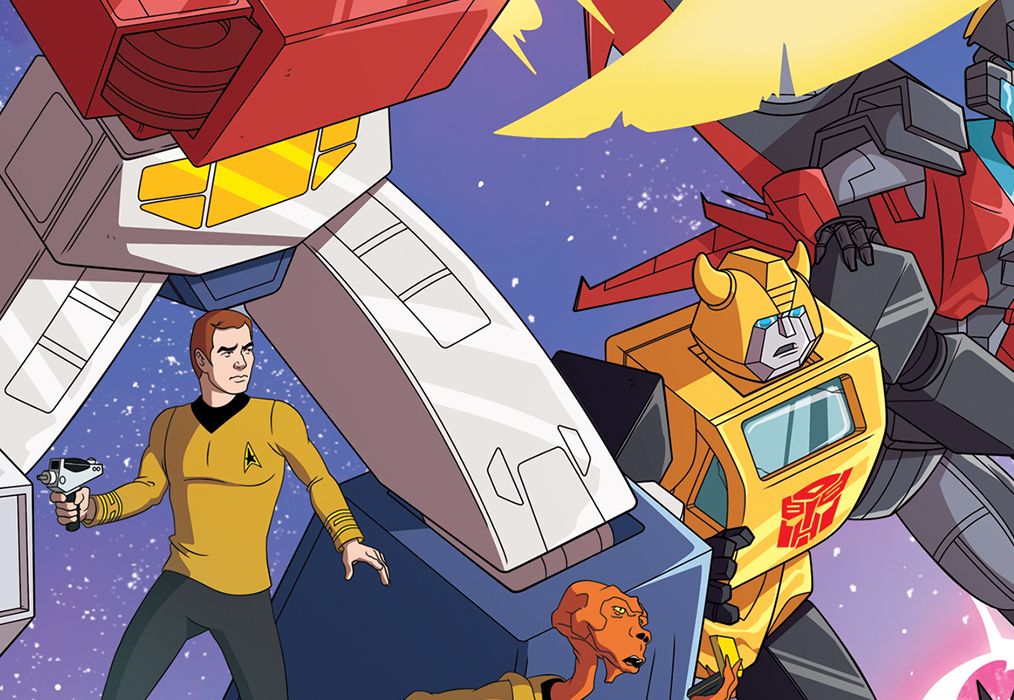 IDW has been exploring lots of different avenues for the Transformers franchise. In addition to the full comic book series, the publisher also has released several different Transformers comics including a movie tie-in series. “Star Trek vs. Transformers” #1 pays homage to two properties, honoring the original runs of both Star Trek and Transformers properties. The issue features Transformers writer and IDW Editor-in-Chief John Barber and creator Mike Johnson on writing duties. Artist Philip Murphy is illustrating the title, attempting to honor both properties with one unified vision. Is this issue just a nostalgiac, naval-gazing adventure with two different cast members or is it a fluid action-adventure story? 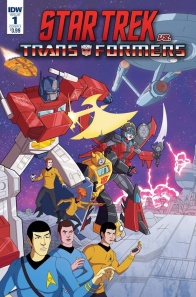 The Transformers ’80s cartoon series meets Star Trek: The Animated Series in a no-holds-barred Saturday Morning mash-up for the ages!
At the edge of Klingon space, the starship Enterprise finds there’s more to the final frontier than meets the eye, when Kirk and his crew come face to face with the strangest life forms of all: Cybertronians! This unprecedented crossover brings together two of the greatest science fiction universes of all time-in the style of their classic animated series! A five-year mission meets a four-million-year war!
Written by two titans of their respective properties, John Barber (Optimus Prime, Transformers: Robots in Disguise, Transformers: Bumblebee Movie Prequel) and Mike Johnson (the most prolific Star Trek comic book writer of ALL TIME!)!
Philip Murphy’s A & B covers connect to form an amazing heroes and villains image!

“Star Trek vs. Transformers” pays a welcome homage from the vantage point of the original “Star Trek” series. Series writers Barber and Johnson get the voices of each robot and Enterprise cast member with grace. Plus, all the classic Transformers even have a more classic morality and set of motivations this time around.

The script is paced very well, immediately establishing a focus on Star Trek and then transitioning into an action story. The Enterprise crew are great everymen for the story and wonderfully establish a more grounded take on the franchise. Even though the characters in the title can be humorous, the stakes of the action still feel real, especially when individuals like Optimus Prime get hurt.

Philip Murphy’s art in the issue is excellent. He brings a great sense of scale to the Transformers cast members. The Stark Trek heroes are very expressive as well. The issue caters towards the Star Trek cast members and builds the plot around them. When they do collide, the robots always come off with a gigantic, fearsome presence. The real drawback to Murphy’s contributions to the issue are how simplistic his pencils are. The art is so sparse in some cases, certain pages feel like a still, lifeless cartoon.

While keeping the pencils of the issue simplistic to match with the tone is a good idea in context, the pencils come off as too static and hollow. At times, Murphy’s characters can look detailed and inspired. The last page, in particular, brings out a more vivid and detailed look the title was sorely lacking. Some of Murphy’s layouts are also simplistic and don’t bring enough variety to the issue. Details are missing from both sets of cast members but they are all drawn with a level of competency and craft.

Even though the issue can come off as slight, the script does an excellent job balancing the different cast members. Kirk has a strong rapport with the rest of the Enterprise crew. Sulu, Spock and Doctor McCoy are all back. The integration with the planet of Cybertron is amusing but odd. One of the most surprising aspects of the issue was how The Klingon Empire bonded with The Decepticons so quickly. While this revealed should have a little cheesy, it brought an interesting, dynamic twist to the script.

In the final cliffhanger scene, a couple cast members from earlier in the issue appear again. This kind of poorly thought out cliffhanger and last page ends up losing the momentum the issue was building towards in the first place. The lore between each cast members and property could definitely use a unique aspect, switching the story up or adding more context as the tale goes on. There were a lot of really nice small moments throughout the story, but without more subtext, the issue can come off like a major plot convenience.

Getting the tone of the issue to be relatively straightforward and innocent while weaving multiple casts together for the first time is definitely a tall order. The script makes readers feel like the Transformers are at arm’s length and extremely intimidating. While each side of the conflict has an established set of stakes, the cast members aren’t very well fleshed out.

“Star Trek vs. Transformers” #1 is a pleasant issue, but the series fails to go much farther than the surface for both properties. In future issues, I hope Barber and Johson will continue to establish the stakes and political ramifications surrounding the battle. Getting slightly more detailed and interesting page layouts would definitely improve the art as well.

Final Verdict: 7.8 – “Star Trek vs. Transformers” #1 is a great burst of nostalgia-filled fun for fans of the original incarnation of the Star Trek and Transformers properties.