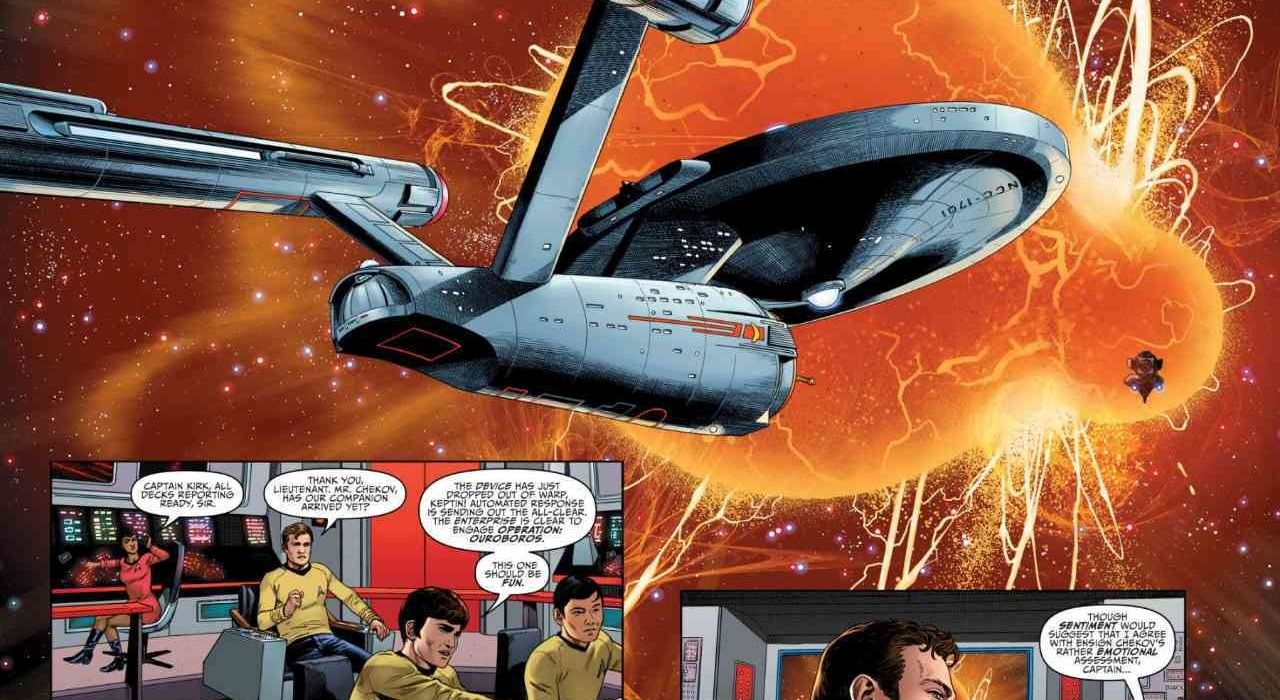 IDW Publishing and “Star Trek” take us boldly where no trekkie has gone before: Into the final chapter of the U.S.S. Enterprise’s deep space journey. As any fan knows, the original Star Trek was meant to chronicle the entire five year mission, but when the series was canceled after season three, and the short lived animated series was a stand in for season four, there was a long wait to get any further adventures of Kirk and co. until the first movie was released. This new series is meant to fill in the gaps showing what occurred during the final year before the crew of the Enterprise returned to Earth before moving onto the next chapters of their lives. To Seek Out New Life and Some Spoilers Ahead 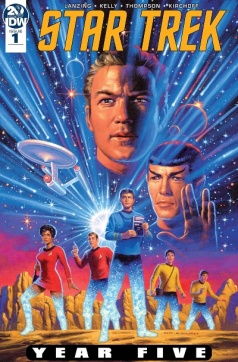 Star Trek fans have had a hole in the canon for over fifty years. Because no storytelling of real importance was released in the ten years between the cancellation of the original series and Star Trek: The Motion Picture we have had to wonder what happened at the end of the Enterprise’s original five year mission and the start of that first film when the crew boarded her again for the first time after her retrofit and upgrade to the NCC-1701-A. IDW’s new series is going to show us some of that time giving us the final adventures and finer personal details, like when exactly did James Kirk get promoted from Captain to Admiral.

As soon as our eyes hit the first panel it is clear that this is going to be a more harrowing tale. A damaged, and seemingly crew-less Enterprise is racing through space with Kirk in his captain’s chair leaving what seems to be his final log recording, as someone in the shadows holds him hostage at phaser-point. The story then jumps back as it begins to fill in the details as to how we got here. While Thompson’s illustrations are faithful reproductions of the TOS style and likenesses, the story opens with a spacial anomaly that would feel right at home in J.J. Abrams’s Kelvin Universe or Star Trek: Discovery. Thankfully allowing his work to surpass what the 1960s special effects would have been able to create, we get a gorgeous look at what this new chapter of Trek holds in store. His is a perfect style for new or old fans. Lanzing and Kelly’s writing is classic Trek which will keep the purists happy. Their dialogue and techno-babble is completely something that we would have gotten from Gene Roddenberry and the other original screenwriters. Fully capturing the sci-fi explanations and character interactions as portrayed by the original cast.

This is a hefty and word-heavy story, but it moves. It pulls you in right from the start and does not let go. As the writers not only catch us up with where the ship is headed next, they nicely touch on where the characters are personally, specifically Kirk. Seeing him at a point in his life where he is uncomfortably unsure about where he should head next in his career is fascinating. For a character that fans know exactly how his life plays out, from his early 30s to his death, to successfully convey his inner turmoil and make it interesting to us is a great feat that should be applauded.

Interestingly expanding on a barely seen alien species, the Tholians, we are clearly shown their homeworld, and apparently their extinction. They do a fantastic job of giving us our first good look at the aliens and their technology; and because we know so little about them, there are no details that uncomfortably grate against the established continuity. This slightly darker story includes dangers, seen and unseen, which add a real emotional weight without taking us out of the type of Trek story we’re used to. Nothing too scary, it feels right at home in this universe.

Thompson’s pencils are exactly the style that any Star Trek comic artist should strive for. He perfectly captures the likenesses of the original actors, especially William Shatner, Leonard Nimoy, DeForest Kelley, and George Takei as Kirk, Spock, Bones, and Sulu, respectively. Unfortunately we don’t get a good look at Nichelle Nichols’s Uhura or Walter Koenig’s Chekov, and his Scotty looks nearly nothing like James Doohan. Aside from those few missteps his work is impeccable. The Enterprise looks so good it nearly brought this life long fan to joyful tears. His take on the anamoly, the Tholians, their planet and their technology is perfect. Kirchoff’s uses color to fully realize that bright 1960s palette of the original series while using a more modern shading technique on the ship exteriors to give a more dynamic and exciting look to the action. This art team knows exactly how to pay tribute and update the looks of everything just enough to make everyone happy and I hope to see them on as many future “Star Trek” comics as possible.

This is the type of comic that should have any trekkie excited. The creative team on this book has brought their A game in giving fans a story that will appease both those who don’t like when Trek strays too far from its original style and those looking for a little more action and excitement. Truly one of the best “Star Trek” comics to come out in years that perfectly balances the writing of these well-known friendships and wordy sci-fi tech talk. There is never a boring or false moment. While the overall plot is nothing that stands out as something new, the important moments are a natural progression of both the bridge crew’s lives and what the next steps for the Tholians could have been if we had ever seen them on the screen again. This is a must read for all Trek fans!

Final Verdict: 9.0, One of the best “Star Trek” comics to come out, expanding on a much-wanted point in time that looks as good or better than any of the original series episodes. This is a faithful continuation that fans have been waiting for.