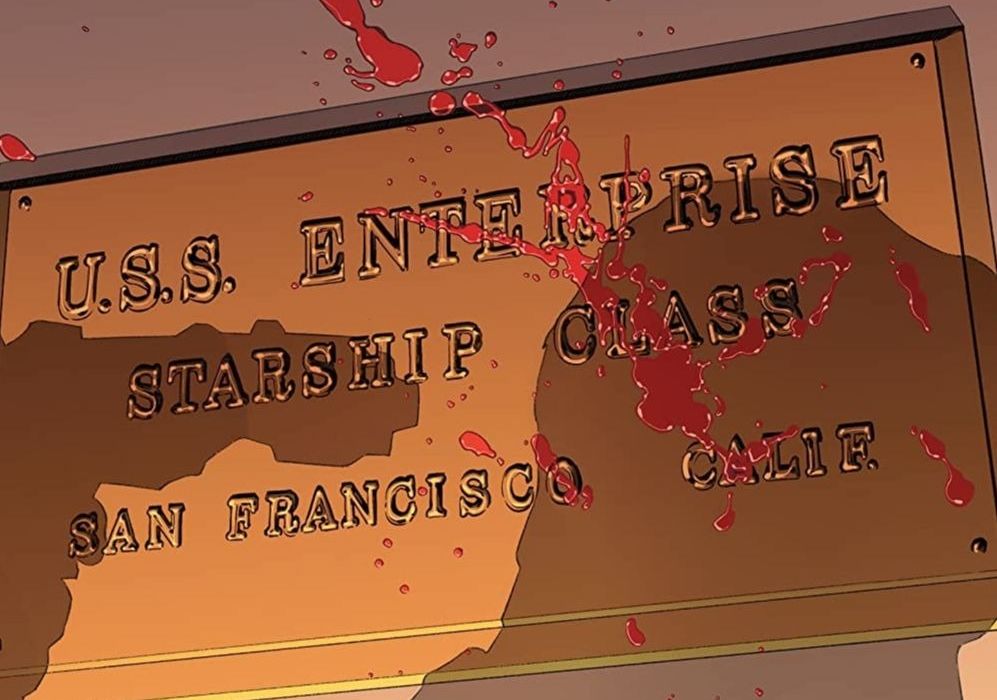 In any Star Trek series, it’s always interesting to see how the captain and the crew influence one another. Obviously, this is limited by the characters we get to interact with or the period of history we’re following, but in most of the shows, it’s clear that the commander influences their crew. These dynamics are best represented when the crew is pushed to their limits, fighting a foe that seems unbeatable, a “no-win” scenario. In “Star Trek: Year Five” #12, Jackson Lanzing and Collin Kelly deliver an issue with one of those dire situations, but full of fun character moments, debates, and enough action to keep you on the edge of your seat. 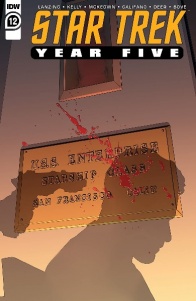 Cover by Steven Thompson
Written by Jackson Lanzing and Collin Kelly
Illustrated by Kieran McKeown, Silvia Califano, and Steven Thompson
Colored by Thomas Deer, John-Paul Bove, and Charlie Kirchoff
Lettered by Neil Uyetake
At last—the moment you’ve been waiting for since the first page of issue #1! With a villain revealed, a stranded crew, and a ship on a collision course with total destruction, Captain James T. Kirk will have to face the biggest challenge of his life on his own! Written by showrunners Jackson Lanzing & Collin Kelly (Green Arrow, Nightwing, Gotham City Garage) this is a perfect jumping-on point before the second year of the series begins.

The majority of “Star Trek: Year Five” #12 splits up Kirk from the crew, each dealing with the fallout of the attack from the time agent Gary Seven and his Tholian ally Isis. The decision to separate Kirk from the crew is a smart one, showing how the Enterprise’s crew care about one another and how they’ve impacted one another. At the beginning of the issue, Gary Seven narrates what most don’t understand about Kirk, that while he’s a man of action, his true strength lies in his adaptability, his ability to win despite the odds. Yet, in the first part of the issue, it seems like Kirk has met his match. Seven is quick, smart, strong, and also unable to feel pain. There are moments where it feels like Kirk has lost. While in other “no-win” scenarios, we see the gears of Kirl’s head spinning as he adapts to the situation, here it seems like Kirk is not simply playing along to make Gary Seven think he’s won. In the issues’ strongest sequence Kirk records what he thinks is his final Captain’s Log, even if the odds are against anyone ever hearing it. He simply recites the mission of the original series, but Charlie Kirchoff really shows the pain in Kirk’s recording, starting with the captain in shadow. It’s an interesting position for Kirk to be in, especially because it highlights the fact that his strength comes from working with his crew. Kirk is a quick thinker and strong leader, but one of the things that give him the ability to steal victory from defeat is the people he serves with.

The other half of the issue is a classic Star Trek debate. Spock, having assumed command of the crew, engaging in the debate of how to handle the situation. While these debates are usually between the trio of Spock, Bones, and Kirk, here the whole crew is taking making their voices known. It shows that the crew has been paying attention and learning the lessons of their Captain. While Spock advises caution, others are quick to point out that is not usually the course of action the Enterprise takes. Spock points out that while debate makes Starfleet great, it’s also the respect of chain of command, and following orders set them apart. But as the Enterprise is crashing into the planet, Spock decides to go with the long shot plans of Mr. Scott and the rest of the crew, taking a page out of their captain’s book and defying the odds to save one of their own.

The planet sequence of “Star Trek: Year Five” #12 is great because it gives everyone a chance to have a big finale moment. Bones is able to change Spock’s mind. Scotty is able to use his engineering prowess to transform a landing craft into a makeshift transporter. Sulu and Checkov step in to defend Bright Eyes and Scotty from the rampaging Isis. The action sequences both on the Enterprise and on the planet are well executed. Isis is introduced by tearing through a group of red shirts, showing her strength and imposing size over the crew. The fights on the bridge of the Enterprise also have easy to follow action and some truly memorable sound effects and one-liners as Kirk and Spock face off against Gary Seven. Finally, the art team does a fantastic job of ramping up the tension of the final moments as the Enterprise plummets into the planet. There’s always something thrilling about a Starship fighting against gravity and Kirk and Spock trying desperately to save their ship and their crew. Watching the Enterprise graze by the planet’s spires only to pull up in the last moments was riveting.

The story and action of “Star Trek: Year Five” #12 allow for the art team to go a little bit darker than other issues in the series. Other issues of ‘Star Trek: Year Five’ attempt to capture the color pallet of Star Trek The Original Series, meaning that everything is brightly lit and colorful. Here the colors are a little darker and moodier thanks to the work of Thomas Deer, John-Paul Bove, and Charlie Kirchoff. There are sequences on the bridge especially that play with shadows in an interesting way. Shadows create a sense of looming defeat during Kirk’s final Captain’s log. They hide Gary Seven’s injuries making him appear that much more threatening when it’s revealed that having his eye gouged out causes him no pain. The planet too has a darker color scheme, with lots of grey and purple tones. As the Enterprise plummets to the planet’s surface, it makes it feel like this might be the last resting place of the crew. While the darker colors don’t necessarily match the look of the show, it did work. The situation might have been more intense, but the sense of camaraderie of the crew and the highlighting of each crew member’s skills made up for the more intense coloring.

“Star Trek: Year Five” #12 has many beats that feel like a season finale. The stakes are high, the action intense, and the resolution satisfying, but as the issue ends, Gary Seven’s narration declares that the plan is still in motion and that the Federation is in its final year. It seems that Seven will continue to be a threat going forward, which is interesting because he does prove to be a good foil to Kirk and the Enterprise crew. His arrogance seems on par with Kirk but his apparent reliance on destiny seems to be working against him. He doesn’t seem to have learned his lesson from this issue, the Enterprise adapts, especially when the odds are against them.