Depending on your age and predisposition, you may have been a big fan of the original Marvel “Star Wars” comics which ran from 1977-1987. I was not born until the year after that series concluded, but I’ve picked up an issue here and there over the years. All of those stories are solidly considered “Legends” now, non-continuity, but for long-time “Star Wars” fans that doesn’t matter. Issue #108 is an anthology story, calling back to that old continuity, a galaxy from a different time, far, far, away. 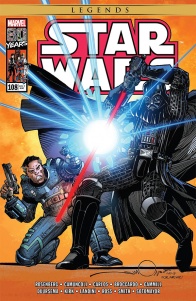 Not only is #108 a throwback to a long lost time in “Star Wars” it’s a stylistic throwback as well. Fascinatingly enough, it doesn’t just mimic the old print style of the 80s pages, but the issue creates a new pop-style that looks like nothing else. Characters are drawn in the style of 70s and 80s mainstays like Walt Simonson or John Buscema, but the backgrounds use a faux-Ben-day-dot effect to get you in the mood I guess. It’s not really clear what the style is going for- it’s too slick to mimic the old comics but it’s definitely going for that throwback feeling. This look is a compromise that creates a look that is wholly original.

Most of the modern “Star Wars” comics are really slick, going for an almost photorealistic look. Some artists have come under critical scrutiny for how the central characters look; they are clearly traced (or heavily photo-referenced) from movie stills. So seeing Han Solo look like a cartoon is kind of great! This doesn’t look like Harrison Ford, it looks like Han Solo! He’s got a slightly bulbous nose and an exaggerated pout, lots of lines running down his face like a vintage 90s Jim Lee “X-Men” panel. Overall, the look is different, jarring, but pretty cool.

As for the stories, most are pretty forgettable. There are vague references to the New Republic and the status of the post Return of the Jedi galaxy, but nothing overly specific. No talk of the Truce at Bakura, no rumblings of Grand Admiral Thrawn or Admiral Daala. What there is are cameos from Valance the Hunter, Amaiza, and Jaxxon. Jaxxon! You can tell the stories were crafted with love, that the creative team loved the original 107 issues, but beyond that nostalgia, there’s not a lot to it. It’s hard to have expectations with such quick stories, but if you are unfamiliar with the characters, the constant barrage of walk-on cameos are bound to leave you cold.

And despite picking up a few of those issues and some passing familiarity, the nostalgia wasn’t there for me. But I can imagine a big fan going nuts. If this issue was all about a young Jacen and Jaina, Mara Jade, Dash Rendar, Kyle Katarn, and the beloved Star Wars characters from the 90s, this would have been my favorite comic of the year. Someone ten years older than me? Maybe this is it for them.

There’s also a universe where this isn’t a legends comic, but one that establishes Jaxxon and Valance in the current continuity, maybe setting up a rivalry between Valance and the Scar Squadron or Jaxxon and Sana Solo. I’m not saying we need a galaxy shattering twist. Jaxxon doesn’t need to be Rey’s parent. But these stories lack consequences.

On it’s own merits, this issue is a mixed bag. The stories involve a lot of shooting and chasing, but not a lot of substance. The thrill of recognition could mitigate that ennui, but this script doesn’t do enough work to endear these characters to new readers. This isn’t an issue for them. The main takeaway is that the art style of this era is worth returning to, and with modern flourishes could define the future look of “Star Wars” comics. But that’s not gonna happen. So that leave “Star Wars” #108 as a pretty one shot that may delight fans of the franchise who miss the heyday of the 70s and 80s.

Final Verdict: 6.8 – A cool art style doesn’t entirely make up for the heavy reliance on nostalgia.