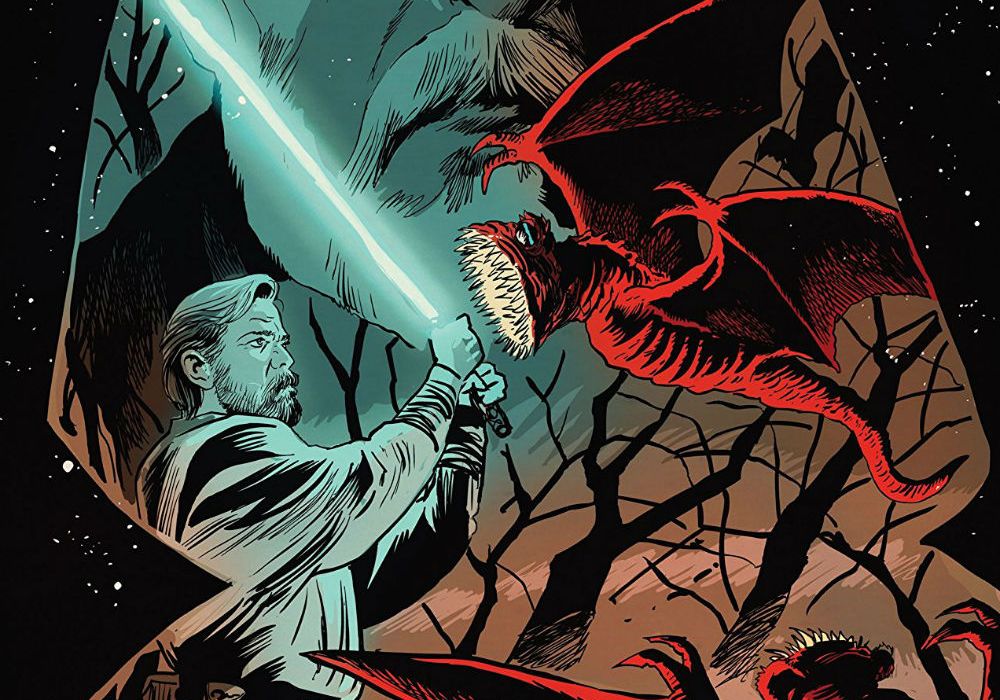 IDW’s all-ages Star Wars anthology book brings us another spooky tale from the galaxy far, far away, this time by Kelley Jones, who’s probably best known for his horror-tinged DC work. The question is, is Jones’ artwork up for the task? Or is it all spook, no substance? 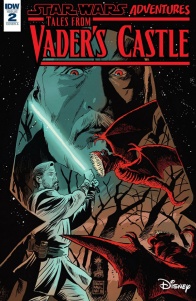 Tales from Vader’s Castle puts a spooky spin on your favorite characters from a galaxy far, far away…

This exciting weekly series explores the hidden corners of the Star Wars universe and features Rebels stars Hera, Kanan, and Chopper; Obi-Wan Kenobi and Count Dooku; Han Solo and Chewbacca; the Ewoks; and of course, Darth Vader—all under the shadow of Vader’s Castle!

Fans will be excited to discover these creepy stories by fan-favorite writer Cavan Scott with art by the greatest talent from across the galaxy, including Derek Charm, Kelley Jones, Chris Fenoglio, Corin Howell, Robert Hack, and Charles Paul Wilson III!

Kelley Jones and all-ages is not something I instantly think of as going together. His style tends to lean gothic and dark, like “Batman & Dracula: Red Rain”, which is why I was so stunned when his art worked perfectly for this story. It helps, too, that it’s contrasted with Derek Charm’s framing story, thus producing a nice dissimilarity and distance between the two. Both do a solid job of establishing the tone of “Tales from Vader’s Castle” #2 as a dangerous adventure that occurs when the shadows are long and the moon is high.

Charm’s art is welcoming, despite taking place on the surface of Mustafar, due to his unique style of simple faces and economical linework. Normally, this would make it an odd choice for a book that’s trying to be a horror book but Charm’s coloring, with deep, dark reds and liberal use of shadows, solidly evokes the genre and, more importantly, evokes the feeling of being around campfire with friends ala Are You Afraid of the Dark?

Then we get Jones’ art, heavily inked and more detailed, the colors significantly less bright; a palate of pale greens, browns and purples, and architecture that is straight out of Dracula. To say that Jones is a master of atmosphere would be to understate his talents. He imbues every panel with a sense of foreboding and his creatures are all grotesque, massive beings, with muscles that shouldn’t be there, pinpoint eyes that appear hollow, and teeth that are sharp enough to cut a piece of paper clean in half.

Perhaps the best page is the introduction of (spoilers) Count Dooku into the story. It’s a clear homage to the Hammer Dracula films, of which Lee was the titular vampire, and Dooku is perhaps at his most menacing here. He’s in full-view, taking up two-thirds of the page and almost the entirety of the panel. His cloak billows in the wind and the space where his legs should be is instead covered in a darkness of which anything could be in.

The next panel is an extreme close-up of Adi, looking right at the next panel, which is an extreme close-up of Dooku’s eyes. His face is coated in that pale green and the wrinkles of his face and of the shadows are accentuated so only his right eye is clearly visible. It’s an unsettling panel and also acts as a primer for the page turn, baiting us into the next reveal.

Unfortunately, that reveal, and the actual meat of the story, is fairly generic and lackluster. The frame works well, as its job is to give a little present action and set up why we’re hearing this particular story, but the story itself is just OK. It’s got the right atmosphere and semi-grandiose dialogue that comes with a gothic tale of horror but the characterization is shallow, the motivations for the villains are empty at best and the story moves along too fast.

It is a cool concept, an infectious beast on a planet of eternal night, but the pacing isn’t methodical enough for this to have any impact so when Ravna and Dooku show up, there isn’t that sense arrival. Part of that may be because of the dual narratives at play — the count in the castle upon the hill and the infectious horde invaders. When Obi Wan and Adi land on the planet, they’re greeted with a scared population and then are attacked by a strange beast. But instead of investigating further, or developing the infection logic right away, they go straight up to the castle. It’s only after Ravna is introduced that we find out the beast transmitted it’s curse onto the clone.

We don’t have any context for who Ravna is prior to his introduction or the terror he’s been inflicting upon the planet below. All we know is, there’s something evil afoot, it’s at the top of the creepy castle, and Count Dooku is all over the cover. That’s maybe the biggest issue I have with “Tales from Vader’s Castle” #2 — the treatment of Dooku’s reveal. It’s built up like its some big secret but he’s on the cover! The title of the story is ‘Count Dooku: Prince of Darkness’ for crying out loud. It’s just a shame because it feels like time was wasted building his reveal up when it could’ve been used to establish what he was doing to the place. His entrance could have been the same but the meaning behind it, and thus the subsequent reveal of Ravna, would have been much more impactful.

One final bit of praise. The way Kelley Jones draws lightsabers is gorgeous. They’re powerful but they don’t have the appearance of being a solid object. They feel like light and they bend like it too. That’s maybe the most creative thing I’ve seen with a lightsaber in any of the Star Wars comics. Kudos.

Final Score: 5.6 – Atmosphere abounds in this creepy, spooky tale but not even the art can save a mediocre story that feels paint by the numbers. There was potential for a great all-ages horror story here but it fails to surprise or remain cohesive.