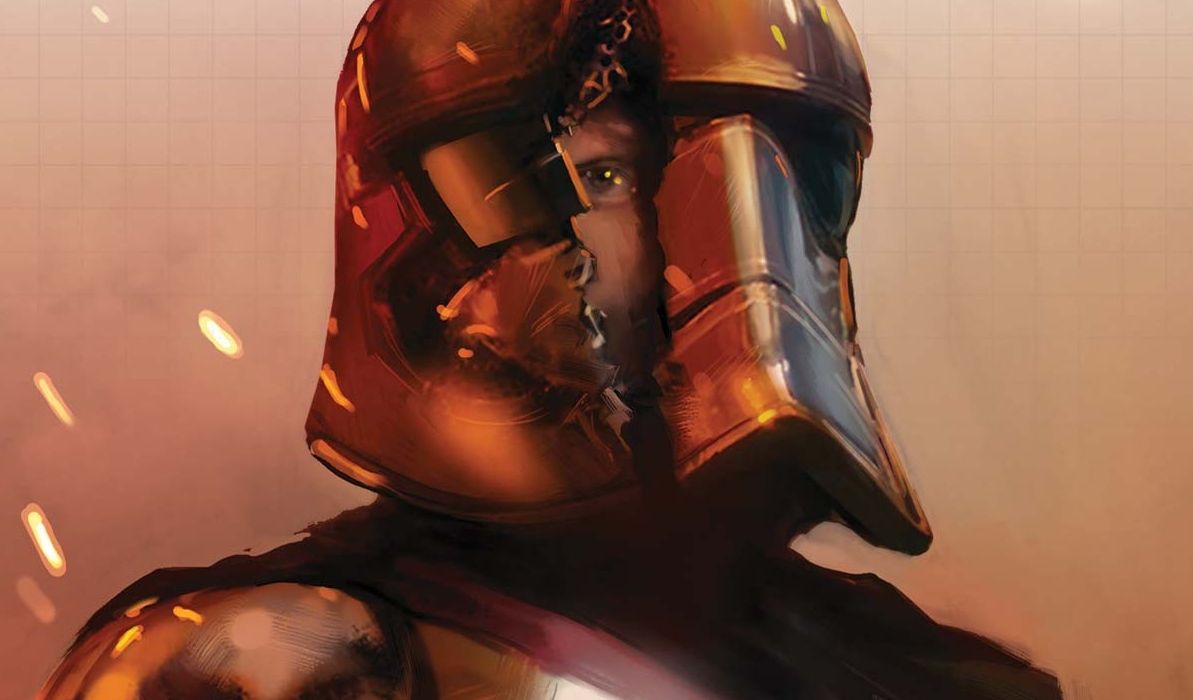 From the ashes of the Galactic Empire, a force known as The First Order looks to topple the New Republic and become the ruling regime. The mysterious stormtropper leading the march is Captain Phasma. A commanding woman who will do absolutely anything in the name of survival and beating her enemies. Some Spoilers Ahead! 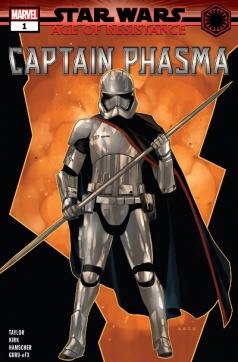 We mostly know Captain Phasma as the tall and foreboding stormtrooper commander, but her limited screen time in both The Force Awakens and The Last Jedi has left fans wanting more. Luckily this has left more of her story in the hands of multiple writers in both the world of novels and comic books. This newest chapter in the ‘Age of…’ “Star Wars” comics brings the newest fan favorite bucket head to the forefront.

Captain Phasma is a force to be reckoned with. She not only commands the other troopers, but the entire battlefield, just with her imposing figure and actions. Tom Taylor takes up the reins of writing Phasma’s character and he does it justice by focusing on the conflicting sides of her personality. Phasma sees herself as the hero of the story and she will do anything to ensure that everyone around her sees her in the same way. She believes she is infallible, over-powering, and intelligent beyond measure, or at the very least she presents herself that way. That isn’t to say she isn’t at least some of those things. Taylor captures her cold, calculating personality and true battle intelligence perfectly.

This one-shot, titled ‘Fallen Guns’ doesn’t have to dive too deep into Phasma’s psyche for us to understand her better. Even if you haven’t read the novel that covers her early life, or the miniseries that shows how she survived from one movie to the next, readers will completely grasp what makes her tick. Normally it isn’t fair to compare a character between its comic book and film version, but when it comes to “Star Wars” and these stories being set within the same continuity, rather than being alternate counterparts to each other, it is hard not to see the missed opportunities on screen.

The story opens up mid-battle during the early years of the First Order’s existence. While we don’t get any real information on this, it seems like Phasma hasn’t been a part of their ranks all that long, but is already making a name for herself. She is respected and feared by her troops. Seeing her in action in these opening pages is extremely satisfying. In just a few quick pages we see Phasma take control of a battle that looked to be a losing one. While she completes these incredible feats, we get a narration coming from another trooper: KM-1873. KM idolizes Phasma and is looking to make a name for herself as well. She yearns for recognition and the status that could earn her a name, something more than a call sign and a white uniform.

As the battle rages, KM’s perception of Phasma changes. When another trooper is badly wounded, KM attempts to save him. Phasma sees this as a weakness, alluding to the fact that she sees all other troopers as tools or guns and when you have to drop a gun because it is no longer useful, that’s the only thing to do. Phasma uses the wounded trooper’s body as a shield against a thermal detonator, but not before KM more or less saved her life. After the battle we get a more in depth conversation between the two women. Phasma even removes her own helmet to show how sincere she is. She promotes KM to officer status and gives her a battalion to lead the next day. At dawn the troopers head into battle to take a strategic stronghold. From here Phasma’s lesson becomes a harsh reality and KM learns who her hopeful mentor really is.

This issue also has some really pretty art. Leonard Kirk’s lines are on the softer side. Which is an interesting style for an issue that is filled with death, war action, and darker themes. The action sequences feel like screen grabs from animated films. It’s a great style that works well, especially because it’s one that might not come to mind right away when drafting this kind of comic. His work also evokes some beautiful sci-fi imagery; especially in the opening war scenes. The page layouts move between small sequential panels and larger splash pages. No matter the layout style, each page truly captures the emotion and type of storytelling necessary for each piece of the issue. It is a huge feat for a quick issue, but it works straight through. There are moments that truly feel like movie storyboarding. You can almost sense the camera movements if this were something on screen as opposed to the page.

Guru-eFX (Joe Weltjens) does gorgeous color work for the entire issue. Some stark contrasts and heavy colors work in tandem with Kirk’s softer lines. He captures both a palette that fits in with the various mediums across all of Star Wars and more traditional science fiction. Lighting and shadows are perfectly executed. Fire, laser bolts, dirt, and sunlight are all major factors and the color work comes across as simple, but is truly exceptional. His work on Phasma’s armor is stunning. Those same factors, light, shadow, and reflections are so important when your central character is covered head to toe in a reflective metal. The entire art crew pulls this book together to make it a solid buy and worthy addition to the Phasma’s history.

“Captain Phasma” #1 is filled with dark lessons for both the characters and the reader. While too often Phasma tends to come off as a two dimensional, and even cartoonish villain, these expanded stories show an evil warrior that uses anyone and anything to stay ahead. Solid writing and exceptional art go a long way to take this simple story to the next level. It isn’t the best of the recent “Star Wars” comics, but it’s far from the worst. Most of the “Age of…” comics have been lackluster, but this issue works overall.

Final Verdict 7.5, A dark and brutal expansion on the mystery that is Captain Phasma. Rightfully shines the light on her villainous ways, both her outward and shadowy actions she keeps hidden.