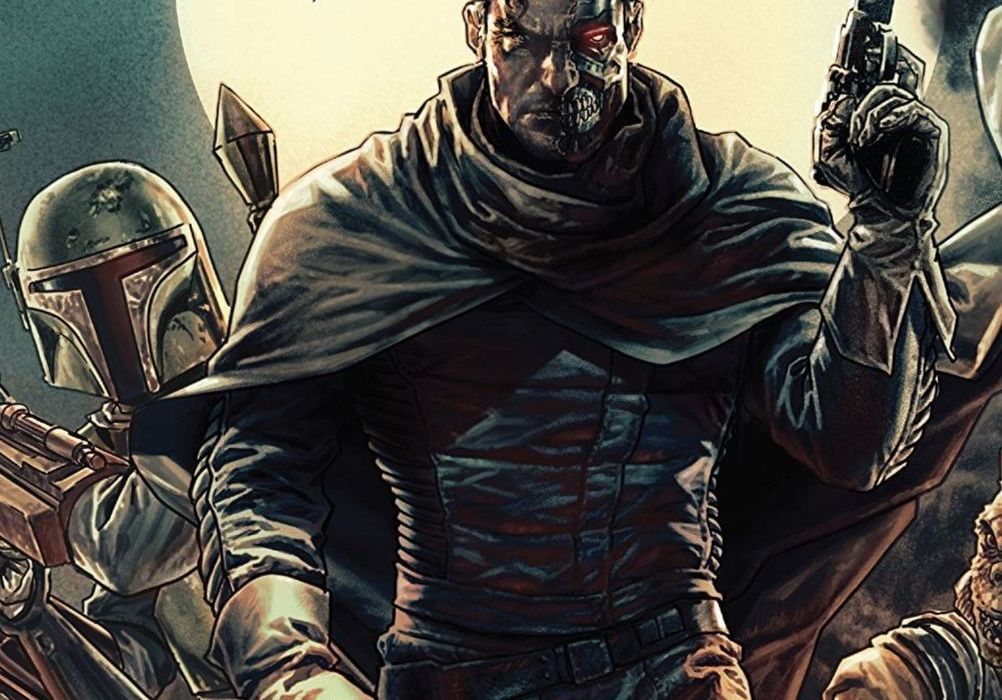 Star Wars is a story of hope. It’s a classic tale, really, people banding together to free their galaxy from darkness and tyranny. Yet, despite its optimistic nature, it is a franchise that has its fair share of grit and grime. There is a memorable and well-established underworld throughout the galaxy, which gives us some of the most memorable and colorful characters and settings in the series. Nowhere is this better exemplified than in the world of the bounty hunters guild. Bounty hunters in Star Wars have given us some memorable characters, some who don’t even have speaking lines! The idea of a full series featuring these characters is exciting, but the execution leaves something to be desired. “Star Wars: Bounty Hunters” #1 is an ambitious story, trying to balance multiple storylines. It’s a big bite and one that appears to be difficult to chew. 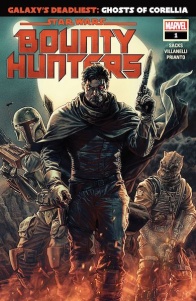 Cover by Lee Bermejo
Written by Ethan Sacks
Illustrated by Paolo Villanelli
Colored by Arif Prianto
Lettered by VC’s Travis Lanham
NEVER BETRAY A BOUNTY HUNTER – ESPECIALLY IF IT’S BOBA FETT! Years ago, VALANCE and fellow bounty hunters BOSSK and BOBA FETT took on a mission that went sideways in a bad way after Valance’s mentor, NAKANO LASH, violently betrayed them. Valance’s team barely escaped with their lives. He never thought he’d face his old mentor ever again…until Lash finally resurfaces under mysterious circumstances. Every bounty hunter in the galaxy wants a piece and Valance is hell-bent on getting to the prize first. He has score to settle—but so does Boba Fett! ETHAN SACKS (OLD MAN HAWKEYE and GALAXY’S EDGE) and PAOLO VILLANELLI (VADER: DARK VISIONS and JEDI FALLEN ORDER – DARK TEMPLE) are teaming up to bring you the bounty hunter adventure you’ve been waiting for!

“Star Wars: Bounty Hunters” #1 does a lot of heavy lifting, setting up multiple storylines and characters, all focused on revenge. The issue begins with what seems to be a fairly standard mission, showcasing each of the hunter’s prowess and (more importantly) attitude. Each of the characters gets one small moment to shine. Bossk is arrogant, Boba Fett almost indestructible, and Valance professional, following the mission to the letter. It’s action-packed and full of fun little character moments. Sometimes you find yourself questioning why all these people are working together, (there’s not even an attempt at feigning professionalism) but it does show how skilled these characters are. With those kinds of skills, you don’t really need to have friends.

The first half of the issue works, the problems start to develop in the second half of the comic. The mission ends with their leader Lash betraying the mission and killing the son of one of the most powerful crime families in the galaxy. The issue then jumps to sometimes between The Empire Strikes Back and Return of the Jedi, following Bossk, Boba Fett, and Valance in the years since that fateful mission. Sacks also throws in the story of another character, T’Onga a former hunter who wants to avenge their brother’s death. This is where the ambition of Ethan Sacks’ script starts to work against the story, mainly by spreading things too thin. Each story shows the hunters learning that not only is Lash alive but that there is a pretty sizable bounty on her head, turning this series into a race for the prize. The thing is, of the four stories only two of them have interesting motivations.

It’s hard to tell why Bossk or Boba Fett even care about finding Lash, outside of some wounded pride or tarnished professionalism. But in both cases, they don’t seem like they are hard up for work. In fact, “Star Wars: Bounty Hunters” #1 ends with a shot of Han Solo frozen in the back of Slave-1. This isn’t to suggest that they shouldn’t be here, it’s just that of the four motivations, theirs is the weakest. For Valance, Lash was a friend and a mentor and for T’onga, Lash’s actions cost a family member’s life. In T’onga’s case, it even involves leaving behind a pretty idyllic life for some greater sense of duty. When telling a revenge story, it’s that kind of motivation that an audience can really latch onto, instead of violating some vague professional code. It might have worked better to put more focus on that individual story while alluding to the fact that these three other characters were also “on the hunt.” By presenting four stories with basically equal weight, it lessens the impact of all of them.

That being said, there are some fun moments throughout “Star Wars: Bounty Hunters” #1. It’s always exciting to see what Dr. Aphra is up to, easily one of the best characters in the comics, and Valance’s droid has the right level of sass in his banter with the bounty hunter. It was also entertaining to see more interactions with Bossk. While his motivation is arguably the weakest, I found his arrogant confidence funny. There are little moments throughout that work, but as a whole, it just feels disconnected to one another.

While the story is scattered, the art of “Star Wars: Bounty Hunters” #1 did some effective work with the script it was given. Paolo Villanelli does a good job of making the world of the bounty hunters feel a little more gritty and dirty than other places throughout the galaxy. The scene in the Cantina especially feels like it is a shady underworld bar, with grime and scratches on the walls. The beginning action sequence also does a good job of the chaos of the mission. In fact, anytime Villanelli wants to show an impactful hit or moment of action, he chooses to replace backgrounds with big splashes of color and light, the world bleeding away and being replaced by the force of the hit. While it works, it does sometimes lessen the world around them. For instance, the street chase in Black Spire featured some scenery that screamed classic Star Wars, when it abruptly changed to the way he showcased action, I found myself wanting that engaging marketplace setting.

Villanelli’s character work was also good in “Star Wars: Bounty Hunters” #1. Once again, in the opening action sequence, the money shot moments for each of the characters was highlighted by accompanying art. Of the three, Boba Fett’s worked the best, but the reveal of Valance’s robot face was the right level of cool and creepy. Valance’s design, in general, was the most interesting, featuring gadgets, laser hands, and a pretty impressive cape (yes, it does matter,) but all of the characters looked as impressive as their reputations would have you believe.

The big question, though, going forward is how engaging is the mystery? We aren’t shown why Lash turned on her employer, nor are we shown the fallout for their failure. Having the series be revenge-driven is the right call, but jumping between the four stories might become tiresome if it goes on for too long. There were things that worked, but trying to balance four separate stories of vengeance seems to be a difficult, albeit ambitious, goal.

Final Verdict: 5.3 – “Star Wars: Bounty Hunters” #1 attempts to do too much in a single issue, it is too spread out to be really satisfying.