Luke Skywalker is dead! He has been for eighty years. So is pretty much everyone you’ve ever known and cared about in the Star Wars galaxy. What’s Star Wars after Star Wars? That’s what “Star Wars Legacy,” a 50 issue (and change) comic book epic by John Ostrander sets out to discover. 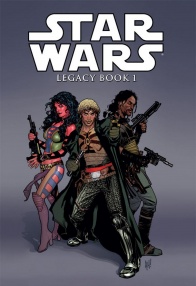 The Jedi Temple is attacked, an Emperor is betrayed, and the Sith are born anew! A lot can happen in a hundred years, but all of the above happens just in this first issue! Not since Luke Skywalker first stepped aboard the Millennium Falcon has the galaxy seemed like such a vast, exciting, dangerous place!

“Legacy” is the story of Cade Skywalker, son of Kol, descendant of Ben Skywalker, the son of Luke Skywalker. Taking us farther in the future than any Star Wars story before it, we are at a time when galactic politics are no longer rooted in the war between the Rebels and the Empire. But the galaxy is far from being at peace. This series came out years before Disney rebooted the Star Wars mythos and as such, it deals with the fallout of everything from the Yuuzhan-Vong invasion to the complicated status of the Tusken Raiders. But don’t be worried about keeping track of the past. That’s just garnish. Legacy is all about combining familiar ingredients and seeing if they can make something new.

The conflict here is between new incarnations of two familiar factions- the Empire and the Sith. Sounds pretty dark and edgy, no? This Empire is led by the Fel dynasty, a regal family of mostly benevolent monarchs. This incarnation of evil Force-users follow a philosophy called the One Sith, which replaces the earlier tradition of backstabbing with rabid loyalty and unity. They’re still evil as hell. Their first move is to take out the Jedi temple, leaving Cade as the only apparent survivor. Cade represses his Force powers with drugs, and tries to make his way like any other galactic citizen. This goes great for him, until the ghost of Luke Skywalker calls him to destiny.

Ostrander is well versed in the many, many, many Star Wars stories out there, so he shoots for originality above all else. Cade does not follow the familiar path of the hero’s journey, but goes through a much more complicated process of self discovery, and becomes his own sort of hero. This generation of Sith villains is instantly iconic, taking on all sorts of familiar roles from fantasy beyond “evil masked warlord.” Darth Talon is a sexy ninja lady with a lightsaber, and Darth Wyyrlok acts as a treacherous vizier.

For my money the most interesting new characters are the Imperial Knights. A powerful order of Force wielders, the Knights are intentionally removed from the struggle of good and evil, love and hate. They’re trained to be pragmatists, and they view the Force as a tool. They wield identical silver lightsabers so as to not get too attached to their weapon. And then they all start making out with each other and building a complicated web of drama that would make the X-Men blush.

With fifty-plus issues to tell the story, “Legacy” goes down a lot of side avenues. It also jumps between a lot of different art teams. You will probably like some more than others, but the design is very much a product of its era (the early 2010s). That may or may not be to your taste, and the changes may be jarring, but the design work is universally solid, as is the storytelling. And that’s the reason you’re signing on: top grade storytelling.

It’s true that by getting far away from the thing you can see it better. “Star Wars Legacy” gets as far away from the familiar story as you can get but in doing so, the style and substance of what makes a Star Wars story comes into sharp focus. While there are similarities between Cade’s quest and the stories of Rey and Finn and Poe and the gang, there’s still a lot of new ground to cover as far as legacy is concerned.

It’s one thing to become a hero who is mentored by legends, but it is another thing entirely to forge your destiny without role models, just stories. Which sort of creates a meta-fictional story. Cade is about as connected to Han Solo as any of us are, he knows the story. But that’s enough. He can be inspired by the story of Han Solo, the same as we can be, and that makes his journey powerful indeed.

All of this makes “Star Wars Legacy” the Star Wars story for Star Wars fans. Not because it’s dense with mythos (though it’s not not that) but because it’s the kind of story you can only tell in a well explored galaxy. It takes the cosmic view of balance in the force, but also zooms in to how war affects the Mon Calamari or what it’s like to be the newest stormtrooper in the squad. It’s an absolute classic, but a forgotten one. Next time you find yourself longing for some classic Star Wars adventure, remember that “Legacy” is out there and that there is nothing else quite like it.

“Blue is the Warmest Color”

Ten years after its publication, Julie Maroh’s “Blue is the Warmest Color” (“Le bleu est une couleur chaude,” lit. “Blue is a warm color”) remains a poignant and moving love story that’s been overshadowed by a controversial film adaptation. Be aware that there will be spoilers, even if you have seen the film version.Written with […]

In 2019, I decided to really start paying attention to “X-Men.” Now I had read the occasional run here or there, Jason Aaron’s “Wolverine and the X-Men” holding a particularly special place in my heart, but there was always something about the X-books that intimidated me. The mutant world features an incredibly large number of […]

Sometimes you find a random issue in a garage sale, slightly worn and only a dollar. Sometimes that issue starts you on a journey into a series you never would have found or tried otherwise. It’s a revelation, a wonder, a true hidden gem. This is not one of those comics.