The most anticipated movie of all time gets a comic-book translation. But does the modern blockbuster survive the adaptation? 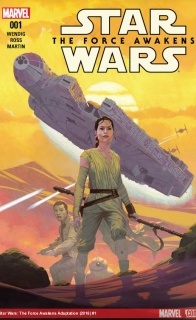 It’s true—all of it! The biggest movie of the year jumps from the big screen to the comic book page! It’s been three decades since the Rebel Alliance destroyed the Death Star and toppled the Galactic Empire…but now, on the remote planet of Jakku…there is a stirring in the Force. A young scavenger named Rey…a deserting stormtrooper named Finn…an ace pilot name Poe…and a dark apprentice named Kylo Ren…Their lives are about to collide as the awakening begins.

The list of properties that have made the successful leap from page to screen is so long at this point that I could probably make up 1000 words just reeling them off. But I won’t, because that would be silly. Safe to say that Marvel, DC, Image, and even a myriad of smaller publishers have really nailed the formula for expanding on the little worlds they’ve created and capturing them in glorious celluloid.

The list of adaptations that have swung the other way is shorter, but there are a few notable exceptions. Shows like Buffy the Vampire Slayer found life after season seven in a comic. Rabid fans of Firefly were offered a life-line in the  books, and even the critically divisive Dollhouse made it to page for a while after the series was cancelled. What I’m trying to say (other than the fact that Joss Whedon seemed to have a seriously rocky patch with studios during the late noughties) is that comic book novelisations can be done, and can be done well. The key, though, is knowing what it is you’re trying to do by transposing the narrative. Usually, these novelisations are a chance for writers and artists to explore concepts too weird, wonderful, and downright nerdy for a mainstream audience. You can explore lore, expand on backstories, and delve into the psyches of characters who never got their due the first time round, and help flesh out the concepts that couldn’t be fully appreciated in a limited series or singular film.

I’m not suggesting that “The Force Awakens” does anything particularly wrong, it’s just that it doesn’t seem to be in the least bit concerned with being anything other than a well-finished storyboard of the final film. It opens with the iconic text crawl (which, I’ll admit, still gives me goosebumps) and then proceeds to hit every plot point from the first third of the film with a near mechanical precision. Wendig’s script introduces us to every character and situation via handy (read, expositional) narrative boxes like “This is BB-8, loyal astromech droid to Resistance fighter, Poe Dameron” and “That is Poe, kneeling in front of the dark First Order Enforcer, Kylo Ren”. Each primary character gets an introduction that would be more at home in a Star Wars Annual than a piece of carefully crafted prose. When we first jumped to the deck of The Finalizer I half expected a box to pop up saying ‘This is General Hux. He is not a very nice man. He’s always frowning and every piece of clothing he owns is black’. When Wendig isn’t explaining situations via text boxes, almost all of his dialogue is pulled straight from the original script. In fact, even on a second reading I struggled to find a single exchange that I hadn’t heard before. Again, this isn’t particularly egregious, but it raises the question who is this book for?. Without the nuance and delivery of the actors in the roles, some of the lines fall quite flat for me. Specifically, the majority of Poe’s dialogue with Ren, which Oscar Isaacs managed to play off with bravado and dry charm, comes across in the comic almost as if he’s unaware of the true danger he’s in.

It’s a shame that there’s nothing really on offer in this book that he haven’t seen before, because I’d have loved to have seen Luke Ross work with something other than what feels like screen grabs from the theatrical release. Ross strikes a great balance between almost photo-realistic faces and a more traditional comic book style. He and colourist Martin create such lush textures in their backgrounds, their clothing, and even the crevices of character’s faces, that you can’t help but feel transported back to many of the most recognisable scenes from the movie. But that’s all we really get from them, a faithful, dogmatic adaptation of a film that almost all of us have already seen. Given the lack of restrictions in terms of the interplay between reality and CGI that the medium offers (i.e. none whatsoever) it would have been great to explore some more of the colourful characters on Jakku, or the more grandiose elements of The Finalizer, or even just added a little extra flavour to Rey’s isolation through flashbacks or something similar.

This first issue is so faithful to the film that I can’t imagine anyone who’s seen the movie already getting anything out of it that they failed to get from the film. And the film is so damn near perfect that, if you haven’t seen it already, then I’d definitely recommend watching it over reading a whistle stop version of its events in comic book form. If the Star Wars Extended Universe has taught us anything, it’s that there’s near limitless potential for stories to be told from A Long Time Ago in A Galaxy Far Far Away, and as such, creating such a slavishly loyal rerun of a narrative we’ve already seen seems like  a wasted opportunity.

Final Verdict: 6.0 – Serviceable, but an entirely surface level revisiting of a story that has much deeper depths still to plumb.