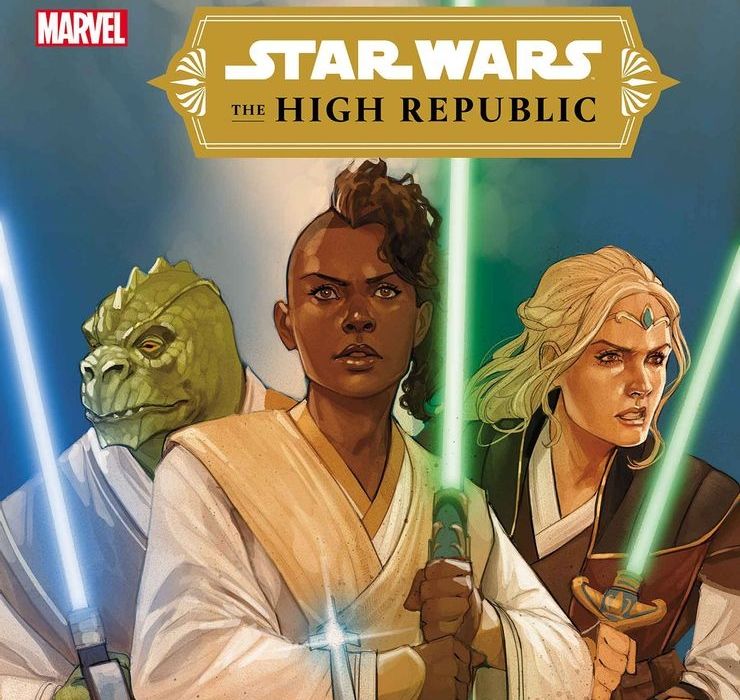 This week sees the release of no less than four different books – a comic, a children’s book, a young adult title, and a novel – in the ‘High Republic’ era of Star Wars. This new publishing initiative is creating and expanding an era that has, up until now, never been explored in Star Wars before. This era, set hundreds of years before the Skywalker Saga, is not the Old Republic of pre-Disney days, but something new, and each of the stories seeks to give readers a different view of era. The first comic of the era, Marvel’s “Star Wars: The High Republic” seeks to give us an understanding of the Jedi of the era. While it certainly does that, does it do so successfully? Be warned, spoilers follow. 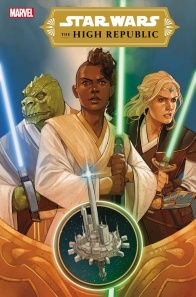 BEFORE THE SKYWALKER SAGA! THE GOLDEN AGE OF THE JEDI! A new era of STAR WARS storytelling begins. It is centuries before the SKYWALKER SAGA. The JEDI are at their height, protecting the galaxy as REPUBLIC pioneers push out into new territories. As the Frontier prepares for the dedication of majestic STARLIGHT BEACON, PADAWAN KEEVE TRENNIS faces the ultimate choice — will she complete her Jedi Trials or rescue the innocent from disaster? New Jedi! New ships! New evils to fight!

It is very hard to extricate “Star Wars: The High Republic” #1 from The Light of the Jedi, Charles Soule’s new novel set in this same era. Some of the same characters appear in both, and while the timeline is a little fuzzy, it seems that the novel precedes the comic, albeit slightly. “The High Republic” is telling a much smaller story, however, one focused around Jedi Padawan Keeve Trennis. All you need to know to fully enjoy this story is found in these pages, and the story told here is a relatively complete one.

That story is where this issue really suffers. Cavan Scott does a fine job establishing Keeve as a character, and does really nice work with her, showing her youthful energy alongside her fierce compassion and her responsibility to do what is right, regardless of the cost. Keeve is a fully realized character, and Scott does an admirable job creating her from the ground up. He’s aided a bit by the exposition granted by having one of the planet’s native creatures tag along with her.

But once we move from Keeve to the story itself, all of that starts to fall apart. Keeve and her Trandoshan Jedi master, Sskeer, are on a planet called Shuraden, and this is where Sskeer is presenting Keeve’s trials to become a Jedi. The trials are interrupted by an alien insect attacking the locals, and Keeve abandons her task to save lives and not see a city destroyed. This is all well and good, and makes for an exciting first issue.

Except that at the end of the issue, it is revealed that her trials were actually the events of the issue, full stop. Sskeer set up a test ‘through the Force’ that would test her. This is, at best, very poor writing, and at worst, totally incomprehensible. To fully explain this will get a little further into the weeds than I would normally like in a review, but it is the only way to really illustrate the point.

So Sskeer knew that the signal from the new Starlight Beacon would attract a deadly (and huge) species of insect to Shuraden and would lead to the destruction of a city in their path unless a Jedi were to stop them, both by using their connection to the Force and asking someone at Starlight Beacon to change the frequency of the signal. That seemingly goes against everything we’ve been taught about the Jedi, who preen themselves as protectors of the galaxy.

What is so frustrating about this is that there is no reason that the trials could have been what Sskeer set up, but when this situation happened, Keeve stepped up and solved a major issue, and more than proved what the trials were supposed to test. But instead, there is this complicated, dangerous, irresponsible test set up, seemingly in full display of the Jedi Council, as they do not question what happened at all. There is a last page with Sskeer that is shrouded in mystery, but does not give any indication as to why or how everything went down, which just leaves the reader even more puzzled at the end of it.

The puzzling nature of the story doesn’t diminish the work done by Ario Anindito, whose expressive and fun work really pushes this issue to interesting places. On Shuraden, Anidito has to balance the destructive power of the Ridadi, the ‘star-locusts’ with the natives, who are almost like the Great Gazoo from The Flintstones. The impish, cloying creatures allow Keeve to dump some information on the reader, but also present a challenge for Anidito, as they are so visually different from anything else in this issue. It is a testament to the work that they don’t stand out like a sore thumb within the more traditional Star Wars images.

Anidito does a particularly fine job when dealing with the Jedi and, specifically, the interior life of the Jedi. Both this and The Light of the Jedi focus on how the Jedi see things inside their minds when they are tethered to the Force. Anidito and colorist Annalisa Leoni create a striking page that blends a dream state with images from around the galaxy, and come together in a way that feels like a natural expression of the Force, even though it is also a somewhat singular image within the Star Wars canon.

It can be hard to illustrate hypotheticals, but Anidito does as fine a job with that as he does with the various action sequences, where his style is clean and lets the action breathe and play out naturally. His style finds a middle ground between the more all-ages “Star Wars Adventures” title and what Marvel has more commonly produced in the Star Wars space, and it fits this new era quite nicely. Leoni’s colors are vibrant and pop off the page in a satisfying way, which adds a visual signifier of this new era, which feels brighter and more less steeped in black and red than other Star Wars eras.

Overall, “Star Wars: The High Republic” #1 works best when you’re taking in the art and enjoying the new time period, and not focusing on some of the more absurd elements of the plot. Much like the first 100 pages of The Light of the Jedi, this issue is more or less one big action set piece. Perhaps the logic will return in future issues that don’t require such elaborate set ups.