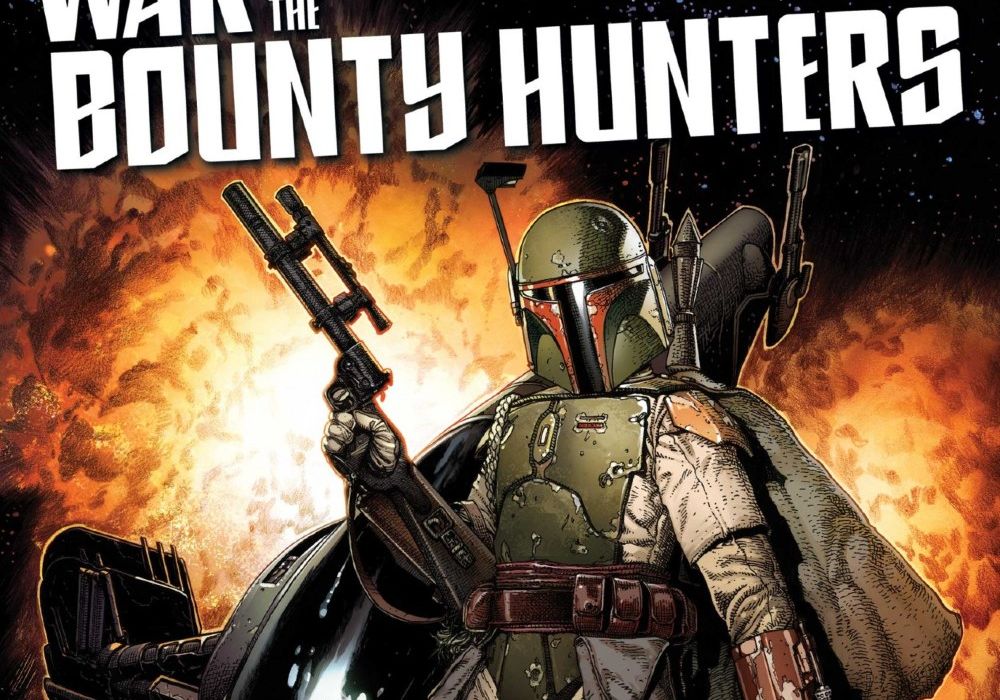 Begun, the War of the Bounty Hunters has.

Yes, there’s always some sort of war in the Star Wars universe, that’s kind of spelled out in the name. Now the comics are giving us a new war within the war, as bounty hunters fight over Han Solo’s frozen form. This is a story arc that will run across the “Star Wars” comics, drawing in characters from every side of the conflict, including bounty hunters who we only saw in passing in the movies (although the expanded universe certainly gave us a lot more on them until that was declared non-canon).

How will it end? 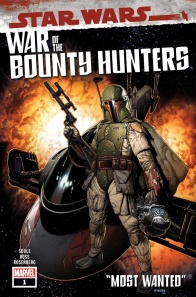 AT WAR FOR THE GREATEST PRIZE OF ALL: HAN SOLO! THE HUNT BEGINS!
▪ Nobody. Steals. From BOBA FETT! The notorious bounty hunter will not stop until he gets what’s rightfully his. For the thief, no corner of the galaxy is safe. Good thing for them that the REBEL ALLIANCE, THE EMPIRE and every bounty hunter in the galaxy is standing in Boba’s way.
▪ With a last-page reveal that will blow this Death Star–sized story wide open, Issue #1 is just the beginning. The biggest crossover in STAR WARS history will continue raging through the pages of the WAR OF THE BOUNTY HUNTERS event miniseries and tie-in to STAR WARS, DOCTOR APHRA, DARTH VADER and BOUNTY HUNTERS through October.
▪ Only one hunter will be left standing, and the STAR WARS galaxy will never be the same!

Yes, for as important as the “War of the Bounty Hunters” story arc is hyped up to be, there’s no escaping one important fact: the comics are still bound to the canon of the movies. Charles Soule has a big playground to explore, utilizing all the time set between the movies, but this story will always end with Boba Fett delivering Han Solo to Jabba the Hutt. The claim that “The Star Wars galaxy will never be the same” rings empty when you realize that it absolutely will be the same, because we’ve already seen the movies.

With that said, that doesn’t mean we can’t enjoy the ride, and if this issue is any indication, it’s going to be a wild ride indeed.

While this is the official start of the “War of the Bounty Hunters” event, it’s been getting buildup throughout the “Star Wars” comics, particularly involving Boba Fett as he transports Han Solo’s frozen carbonite block. As such, it’s helpful for readers to be up to date on the comics up to this point, although the recap page (tastefully presented as a Star Wars opening scrawl) gives a quick overview of everything readers need to know.

With that said, knowledge of the “Star Wars” comics continuity will be important to fully appreciate this event, since it will span across the comics and involve characters playing active roles in each one. So if you haven’t been reading “Doctor Aphra,” her role might be confusing; likewise with “Bounty Hunters.” In fact, it goes beyond that, with characters from Clone Wars and even certain Star Wars movies coming in to play roles. Some of them are even pleasant surprises, so I won’t spoil their roles.

Others are Marlo the Hutt, who is clearly a Hutt version of Marlon Brando’s Don Corleone. Yes, that is canon.

Suffice to say, the more you know about the Star Wars universe, the more you’ll be able to understand and appreciate this comic.

With the interconnectivity established, how is the comic itself?

Charles Soule does a great job kicking off the story. He gives us a good balance of character moments, plot progression, and action, which moves things along quickly. Every beat lands nicely, setting up the overarching story and bringing us as readers into it with the characters.

In fact, there are some rather clever moments in there. At one point, it introduces two new bounty hunter characters, and through their dialogue quickly lets us get to know who they are and what their motivations are. Then one of them tries to go after Boba Fett and is unceremoniously taken off the board. It’s a nice setup and delivery, which helps bolster Boba Fett’s character.

This is, after all, primarily a Boba Fett-driven issue. It has plenty of moments to establish that he is a badass, and how his reputation follows him for better or for ill. On one hand, he can make a group of armed people back off and give up just by reminding them who he is. On the other hand, it also means any bounty hunter trying to make a name for themselves will be gunning for him. It’s good for the character and helps establish the reputation that the movies only alluded to.

With Boba as our viewpoint character, we get to see all the pieces fall into place and the story can begin in earnest. So story-wise, it’s a good start to the event.

As far as the art goes, I’m of two minds. To start with the positive, the image compositions are fantastic. There are some panels that make great use of framing and the way they’re angled to make Boba look intimidating and impressive. Near the end of the issue, we also get a great shot across a two-page spread showing the various factions at play and how they’re all connected. So visually, it’s all very well established.

On the other hand, Luke Ross’ art can often feel flat. While it’s not lacking for detail, there’s not enough depth to the characters to make them really feel present. This is particularly noticeable with characters’ faces, which often consist of detailing through wavy lines, which doesn’t quite work for them.

This also has an effect on the action scenes, where the blasts and impacts don’t have quite the weight behind them that they need. The posing is excellent, but the impact isn’t there; a few action lines could make a difference there.

With that said, there are some strengths to the art style as well. While there may be some difficulty with the faces, Boba Fett always wears a helmet anyways, and Luke Ross’ artwork does make him look and feel badass in it. The body language comes through loud and clear.

Plus, the scenery and starships look great! The designs of starships like The Vermillion and the Hutt ships are all creative and reflect their owners’ characters. For instance, the Hutt ships share design aspects similar to Jabba’s sail barge from Return of the Jedi, making them unique and recognizable within the Star Wars universe.

Neraj Menon also adds a lot with the color work. There’s a watercolor-like style to it, which suits Luke Ross’ illustrations nicely. It adds more detail to the characters and scenery, making the images feel more alive. In fact, there’s great synergy between the illustrations and colors, from the bright lights of Nar Shaddaa’s city below to the yellow sands of Tatooine. Neraj Menon’s color work can even make the cold void of space feel alive, with bright stars and galaxies lighting up the background.

All in all, “War of the Bounty Hunters” is off to a good start. The story moves at a good pace, there’s a lot to enjoy for fans of Star Wars and all its lore (both comics and movies), and there are some particularly well-composed panels. While some aspects may not be my exact cup of tea, it still works well as a start to the event.

Final Verdict: 7.1 – “War of the Bounty Hunters” is setting up to be an exciting new chapter in the “Star Wars” comics, bridging the gap between movies with plenty of high-stakes action and callbacks to the wider universe as a whole.