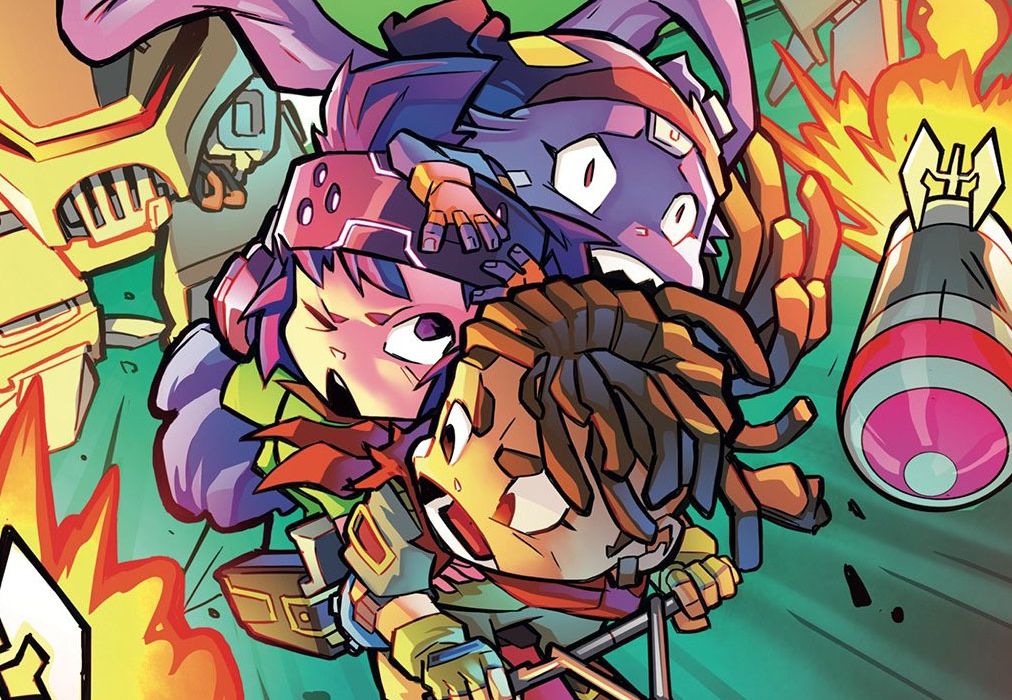 Author James Roberts recently wrapped up his run on the Transformers property in November 2018 with “Transformers: Lost Light” #25. Nearly a year later, Roberts is back with a brand new title at IDW Publishing with “Starcadia Quest.” Artist Aurelio Mazzara is joining Roberts for the title. “Starcadia Quest” is a boardgame title that initially launched on Kickstarter by CMON games. The title itself is a spin-off of the “Arcadia Quest” board game. “Starcadia Quest” is still in development from CMON. This prequel series from IDW is the first time fans are given the opportunity to be exposed to these characters. Given the impressive pedigree of writer James Roberts, there’s reason to be excited for “Starcadia Quest.” Given that the title is a three-issue mini-series based on an anime-influenced property, will the book have enough content and ideas to hold the interest of the readers? 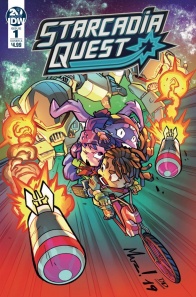 Out in the Frontier, the toughest jobs in the galaxy are handled by Freelance Adventuring Crews, and on his sixteenth birthday (kinda), the delivery boy known as Starkid sends out a call for the best recruits he can get… at his local Stardollars coffee shop. An action-packed and hilarious QWST begins!

Nearly every time I developed a theory regarding what “Starcadia Quest” #1 was the series wildly subverted my expectations. Roberts opens the story by giving readers background on the issue in the form of pop-up ads that are shattered by Nixie O’Fix. Nixie is promptly arrested for mishandling sensitive information and identifying herself under a false name. Nixie’s situation escalates quickly and shows just how oppressive the law enforcement of “Starcadia” can be. It is also staggering this early on in the series Roberts begins to subvert the expectations of the reader.

The aesthetic of “Starcadia Quest” is a massive hurdle for me as a reader to look past. The simplistic anime-influenced visuals are a far cry from traditional western art. The characters are also miniaturized and deformed, carrying small bodies and large heads. The level of cognitive dissonance can be a sheer delight when these characters are indulging in conversations about orphans and copyright law. The personality and vision of Roberts as a writer shines through the narrative even with the small heroes of the story. Unfortunately, there are times when the minutiae of Starcadia Quest’s world can hold the story back.

While Roberts script subverted some of my preconceived notions regarding the property, I can’t say the same about the art from Aurelio Mazzara. Mazzara’s illustrations can pack a lot of detail and characterize the expressions well, but the style doesn’t serve to ground the narrative in any sort of reality. In the early scenes where Nixie is outrunning a Data Guardian, there are average human characters in the background that have a minimalist and absurd look that brings me out of the narrative. Roberts script also packs a lot of dialogue bringing the visuals of the issue down in certain moments. The moments with Starkid in the diner call for a more refined and subtle approach to the art. Mazzara isn’t able to capture the grounded tone of the scene with his bombastic expressions.

Ultimately, the Achilles heel of “Starcadia Quest” #1 lies within the visuals of the title. Roberts packs the script with an absurd amount of text to overexplain everything about the world of the property. A huge amount of the property itself is set in a diner where Starkid is just sitting down and speaking with others. The script isn’t able to take full advantage of the medium and Mazzara is only able to add secondary actions to shift the setting of the narrative. It is disappointing to see a less focused approach to comic book scripting from Roberts who has proven to have a deep understanding of the medium of comics. Fortunately, the small moments taken out of context kept me interested until the last page of the issue itself. I was always surprised to see how the situations within the story would play out. Figuring out just how the Data Guardians would come up with ideas on how to arrest Nixie and Starkid was another endearing aspect of the title.

While the content of “Starcadia Quest” #1 features a lot of satire and irony within a dystopian future, the visual direction and composition of the narrative is holding the series back. Roberts imbues the title with too many diversions regarding topics that don’t ultimately serve the narrative. The comic comes off a little too cute as well with the witty banter of the three leads wearing thin over time. The serious nature and tone of the Transformers property struck an impressive balance with the writing. I would be curious to see if a future mini-series with the same creators and property could find a more balanced approach to the tone. “Starcadia Quest” #1 is an incredibly uneven first issue with a derivative visual direction. Fans of Roberts previous writing are going to be charmed with the dialogue and world-building of the story.