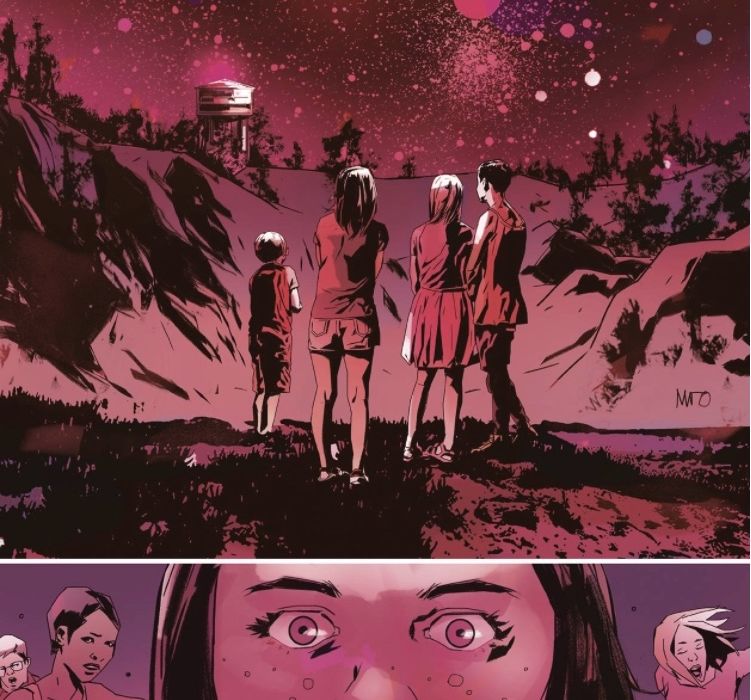 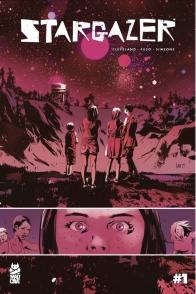 cover by Antonio Fuso
Written by Anthony Cleveland
Illustrated by Antonio Fuso
Colored by Stefano Simeone
Lettered by Justin Birch Years ago Shae, her brother Kenny, and two childhood friends experienced a traumatic, unexplainable event that left Kenny scarred for life. Kenny commits himself to the belief that what they experienced was an alien abduction. Twenty years later and the friends have since drifted apart, but the sudden, mysterious disappearance of Kenny leads the group to reunite and discover the truth of what took place all those years ago.

“Stargazer” #1 entertains with its straight-ahead world-building. Cleveland knows how to write punchy dialogue for kids that feels lived in, and doesn’t waste a lot of time with exposition. It’s clear these childhood friends know each other and have spent a lot of time together, and we get a good sense of their characters from a relatively short intro scene before we’re whisked off into some trippy action. We also get a sense of what Shae and Kenny’s relationship was like before the incident in just a few panels, and that emotional truth takes us pretty far.

“Stargazer” relies primarily on visual storytelling. Kenny does talk a lot, but it’s typical of UFO believers in fiction to have the chatter button set permanently to “on.” Cleveland keeps the other dialogue minimal, and Fuso’s art does most of the talking. We’re not clear why Shae’s so walled off, aside from her brother’s traumatic experience, but a picture in her home fills in some of the gaps and hints at some deeper trauma that she’ll explore in this mini. Kenny’s enthusiasm is matched by his wall of newspaper clippings and shirt, and the trailer he lives in says more about his ability to hold down a steady job than the dialogue, blessedly. There are a few moments that are written, but not too many as to make the book feel heavy or too wrought in this first issue.

Fuso favors some angles and a more minimal line, and Simeone’s bright palette can sometimes disorient just a bit on the page. It’s nothing that’d put a reader off, but the initial childhood scene is a blur of acid-infused neons, and dialing back the vividness in the beginning would be nice to help Fuso’s sequential action flow. The book feels like it’s figuring out its style as it goes. The childhood scenes are a little more peaky, claustrophobic and angular, no doubt down to fitting a larger cast on the page. By contrast, there’s some roundness and space in Shae’s nighttime montage and in Kenny’s confrontation. It’s unclear if this is intentional as a visual cue between past and present, as the color palette is pretty consistent across all time periods in the book. It’s themed more by page than by scene, and while there are some nice progressions, like when Shae’s “dreaming” later in the book and the saturation increases as the action builds, the book is a bit too bright at times.

The art details that do pop are nice, like the stars reflected in Shae’s glasses and her moodiness done in shadow as she delivers an ultimatum. More regular panel borders would serve the overall stability of scenes, especially the flashback when Shae’s mom is trying to figure out what’s happened to Kenny. The scene is strange enough thanks to Fuso’s style and Simeone’s nice details here (the pasted-on, pop-art feeling of the sauce on the pizza) that we don’t need a tweaked layout to maintain tension. Square panels would right the eye and do a lot to orient us when we need to slow down in this moment. There’s also too much contrast to merit partial insets with irregular borders, because it’s hard to pick them out. Kenny also appears much older than in the previous scene, which leads to a larger question of how much time has passed that puts us at odds with the immediacy of the dialogue. The scene lands, but easing back on the style here could help it land as the breathy beat we need before the final action.

Birch picks a wide font and irregular oval balloons that make reading easy, even when Cleveland puts a bit too much text on the page. These instances are rare, thankfully, but the scene mentioned above with Kenny and Shae’s mom is heavy on their mother’s dialogue. Birch finds a way to butt the balloons less aggressively than others might, thanks to the horizontal real estate available, and the book clips along pretty well. Sound effects are blocky and irregular with the most intense pops in Simeone’s palette, and blend well with the art and style of the book as a whole.

Overall, “Stargazer” #1 is a solid first issue that dials up the color intensity and layout variation a little too much to achieve total cohesion. Fuso and Simeone are on display at play, here, and there’s a lot of good that comes of that kind of joyful experimentation. The aliens themselves feel sinister and ominous thanks to the pigmented dots and abstract lights, and the final scene is iconic without feeling derivative of other abduction stories. A few spots could benefit from some straight-ahead paneling and a more subtle palette, so when the action really starts to hit we know immediately that things are getting weird, and will probably stay that way.

Final Verdict: 7.5/10 – “Stargazer” #1 is a solid first issue that goes hard on style and plot to make for an enjoyable read.