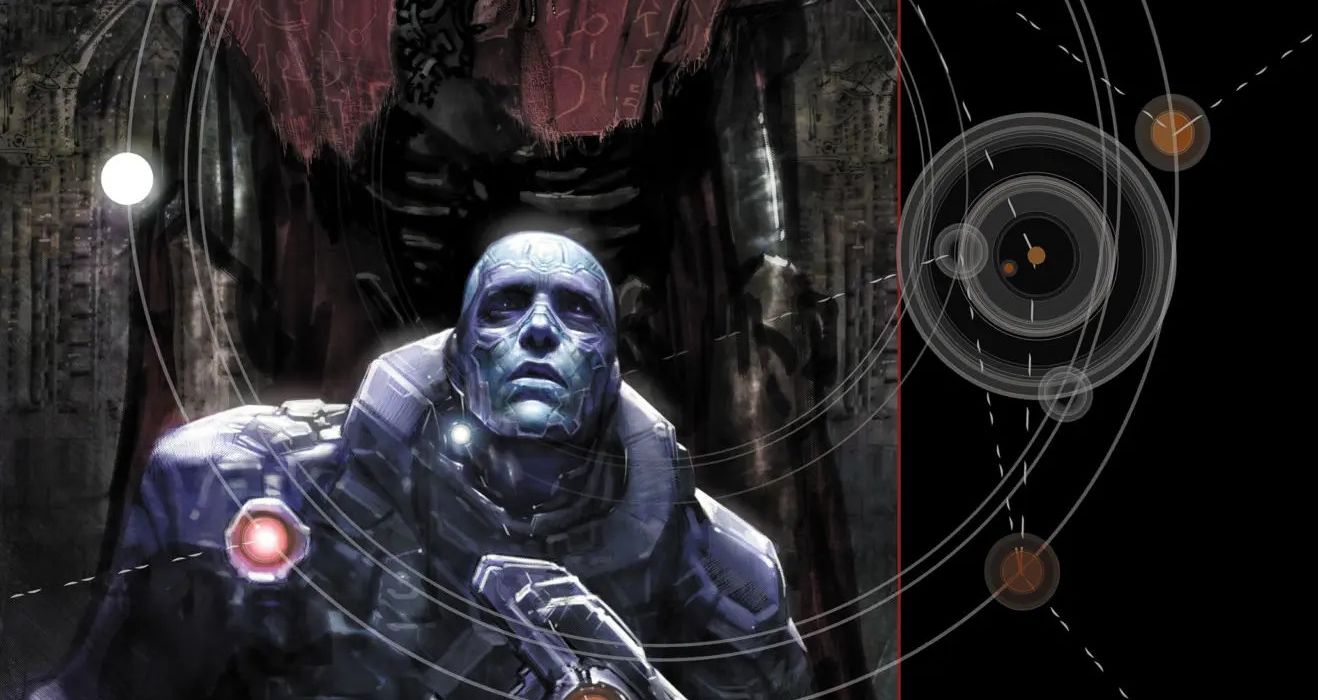 It’s always exciting to combine genres and see how they interact—seeing how the pirate story works in a magical sea or the western where you’re fighting off alien invaders. It allows you to test the scope of these stories, seeing how the visuals play with one another and elevate one another. Likewise, taking a legendary story and then putting it in a different medium allows you to test the impact of a story and explore what makes it powerful. While “Starhenge: The Dragon and The Boar” #1 features some truly stunning visuals and occasional moments of clever dialogue, one can’t help but wonder if a monthly comic was the right choice for this story. At the very least, you have to wonder if there wasn’t more Liam Sharp could have done to create a better entry point for this space-fantasy epic. 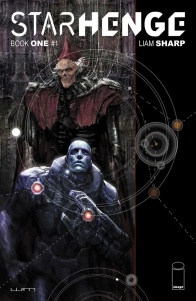 Revered creator LIAM SHARP cuts loose in his visually stunning six-issue masterpiece, STARHENGE, BOOK ONE! A future Merlin travels to 5th-century Britain to prevent monstrous time-traveling killer robots from robbing the universe of magic, and Amber Weaver’s lively present-day narrative reveals how she becomes drawn into a war across time!

The Terminator meets The Green Knight in 30 enthralling story pages, setting the scene for this original epic inspired by the Arthurian sagas!

Something about “Arthurian legend in space” felt like it would either work without a hitch or struggle under its weight. In a way, something about “legends of old” already has a science fiction feel to them. They feature humans, sure, but they are from radically different worlds, upholding values or casting judgments on others that might feel weird to our sensibilities. The problem, however, with “Starhenge: The Dragon and the Boar” #1 is that it’s trying to do too much for an introductory issue. Its scope is vast, jumping between the past, the present, and a far-off future. Moreover, most of the script is a narration from a character from our present, who assures us of their connection to the story. The problem? She doesn’t do much to prove it.

The narration of the premier issue of “Starhenge: The Dragon and The Boar” #1 isn’t necessarily bad, but it certainly feels aimless. Liam Sharp’s script certainly has some tongue-in-cheek moments in the narration, from pop culture references which create touchstones for the audience to engaging in cosmic-level worldbuilding, explaining the relative nature of time and how Einstein didn’t account for magic. It’s doing a lot of heavy lifting, and it almost feels like Sharp includes the occasional moments of levity to remind you not to take this all too seriously, but ultimately the script for the comic feels all over the place. It’s challenging to keep up, occasionally overwhelming, and doesn’t necessarily give you a chance to care. The narration does its best to assure you that everything will eventually make sense, but by the end of the premiere issue, it’s difficult to believe. It was honestly kind of shocking when you got to the end of the first issue; it just kind of ends? It didn’t necessarily feel like it was building up to a crescendo of an ending. It doesn’t feel like it’s even necessarily the end of the first chapter of an epic saga. This isn’t the first comic with strange pacing, but it seems like it isn’t even necessarily interested in being a monthly comic.

By the end of the first issue, it’s difficult to know where “Starhenge: The Dragon and The Boar” #1 is even going. It seems that there is something to the time hoping the premier issue introduces; it is possible that the heroes of old are the unstuck travelers of the future, but it doesn’t necessarily explain how or why. There are moments, too, that the script feels almost too clever for its good. Ideas that “Merlin” is a title of a warrior sent through time and not the name of an ancient wizard, things like epic struggles take place in not only physical spaces but in spiritual and dream spaces. Sharp may have some more extensive plans that he is setting up in the first issue of his space-faring saga, but it just doesn’t feel like he is interested in pacing this in a way to get readers to return to the title. It’s difficult to even think of how this could be remedied, short of presenting the comic as a graphic novel, because the thing about “Starhenge” is that it is supposed to be a visual medium, and that is when it’s the most successful.

While the script leaves something to be desired, pacing and dialogue, it is a visual masterpiece. Sharp has a masterful way of making each period feel unique while creating a throughline of some basic visual vocabulary. For instance, each time period has a distinct coloring, with the present being charcoal grey and chiaroscuro shading, the future embraces the deep dark blacks and blues of the vastness of space, while the past is a little more colorful, they are deep greens and reds. Each period has the occasional pop of colors that go against the established visual language and make those panels stand out. Still, it helps keep you grounded in the variety of settings Sharp is setting up. One of the other significant differences is Sharpe’s use of collage to set up unique imagery through the issue. Some visuals are horrifying, things that wouldn’t seem out of place in a Robert Eggers film, others that are mysterious and magical, and still others that are deeply human. The art is undoubtedly the issue’s highlight, from how the pages are laid out to how he manipulates the panel layout to build larger images. It’s an incredible looking comic, but that is only one part of the equation.

From a visual perspective, “Starhenge: The Dragon and The Boar” #1 is a standout comic, but overall the issue falls short of being a comic that merits a return. Again, it’s possible that if it were paced differently or presented as an original graphic novel, it might work better, but as the first issue of a monthly story, it leaves a lot to be desired.

Final Verdict: 5.5 While “Starhenge: The Dragon and The Boar” #1 is a visual masterpiece, the execution of the comic leaves something to be desired.