The last issue of “Starve” was released way back in the dim and distant past of October, 2015, and it featured Warriors style gangland battles, tense, timed guerilla cook-outs, and about a hundred pounds of raw meat. It was dark, dangerous, and excessive, and it managed to tie up some of the loose ends of the series while still leaving the weird and wonderful world of scarcity and excess that Wood and Zezelj have created open for exploration. 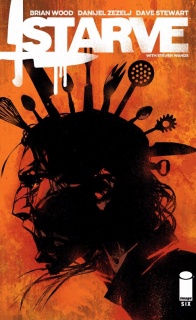 NEW STORY ARC. Critically-acclaimed STARVE is back for a second season! Chef Gavin Cruikshank shifts his focus from the soundstage to the streets, addressing real world themes of food scarcity and class warfare. Smart, subversive, and darkly comic, STARVE is an instant cult classic.

Issue #6 is the start of that new exploration, and with battle lines redrawn, and chef-turned-cultural-combatant Gavin Cruikshank still focussed on tackling the Frankenstein’s monster of an industry that he helped create. Gavin is still mid-way through the latest season of “Starve” and their latest challenge blends culinary ability with Deadliest Catch style external challenge. But, in the hiatus between issues, Gavin seems to have had a change of heart. Wood’s protagonist has evolved from unsuspecting ex-exiled chef, to unwilling participant, to bug in the system, in the space of a few short issues. Now, convinced that there’s no way to take down the behemoth that is Starve (and by association, pop-culture’s obsession with televisual style over substance) he’s trying to find a way to check out of the competition and into the real world.

In case that previous paragraph didn’t make it clear, “Starve” #6 has a lot on its plate to establish for the start of this arc. The first five issues stuck almost exclusively within the realms of the super-rich, but 2016 sees Wood’s first foray into the ‘real’ world, a dystopian take on a fast-food culture maintained through food scarcity and a lack of education. It’s interesting to see the other side of Wood’s world laid out like this, and reuniting us with some familiar faces to walk us through the bustling streets is a nice touch. I often find Wood’s writing to be a little on-the-nose, but in the bombastic world of reality TV cooking it feels as though that earnestness works. Gavin Cruikshank is a truly likeable, if incredibly flawed, character, and determination with which he pits himself against the system is endearing.

Unfortunately, while it does offer up some interesting moments, #6’s more scattershot approach isn’t quite as gripping as any of the previous arc’s offering. This issue lacks the anchor of a solid challenge that the previous episodes of Starve provided for Gavin, then still new to the culinary hellscape he’d returned to. The speed with which Wood progressed Gavin’s assimilation and rejection of this culture of plenty means that, by issue six, he’s beating the system without even really trying. Early on in the issue there’s a brief nod to the possibility that the old Gavin – narcissistic and medicated to the eyeballs – might threaten to rear his head again, but it appears that, for now at least his love for his daughter and the purity of cooking are a heady enough cocktail to keep him on the straight and narrow.

For me, the biggest draw to this book has always been Zezelj’s heavy, angular artwork, and in that respect at least, issue #6 completely delivers. The opening section is a stark, icy ocean action piece that reminds readers instantly of the tone of this weird and kind of wonderful book. Gavin and Roman are all-but stranded on a sharp grey expanse of sea, bickering across interlocking insert panels before their conversation is cut short by a showered with a multitude of vivid orange crabs that drowns them out completely. Zezelj’s ability to balance the harsh thick lines that typify his style with the delicacy of his subject make for really enjoyable viewing. Hands; whether they’re preparing precious meals, gesturing confidently, or poised uncertainly, seem to be a focal point in this issue, and Zezelj isolate this difficult to render body part to show that there are many different ways to express emotion.

Throughout this issue Zezelj also manages to subtly convey the feeling of abandonment that flows through the city. While Wood’s dialogue-heavy script means that there’s a lot of conversation to be had, Zezelj borders these interactions with grim monolithic buildings and spiky, rusted watertowers in a way that makes the whole city feel like a ghost town. This technique means that the bulk of the city seems to press in from the corners of the pages, further illustrating the mammoth nature of the task Gavin has ahead of him if he wants to reclaim New York.

“Starve” is a series that caught my eye initially for the bizarrely incongruous mishmash of genres it presents. Trashy pop-culture cooking show meets cutting social commentary meets dystopian near-future propaganda meets familial drama. Like a haute cuisine dish, there are a lot of ingredients in the mix here that you might not think work well together. But, for some reason, the distinctive blend of flavours had me hooked throughout the first arc. Issue #6 feels a little less flavoursome so far, lacking the focus and drive that characterised its predecessors, but there’s still more than enough going on here to make this a tasty entrée for Wood and Zezelj’s second serving.

Final Verdict: 6.7 – The most Machiavellian cookbook out there is back on the menu, with enough potential to offer readers a more than satisfying bite.