“Steel Cage” #1 is a successful novelty issue in which three shorts go head to head to fight for the ultimate prize: our favor! Warning: minor spoilers ahead. 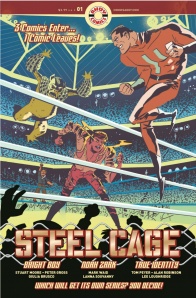 Cover By Elsa Charretier
Written by Tom Peyer, Stuart Moore, Mark Waid
Illustrated by Alan Robinson, Peter Gross, Lanna Souvanny
Colored by Lee Loughridge, Giulia Brusco, Lanna Souvanny
Lettered by Rob Steen Three dazzling short “pilot” stories from AHOY’s finest – and you get to vote on which series continues! In “Noah Zark” by Mark Waid and Lanna Souvanny, an alien boy is kidnapped into an interplanetary zoo-and becomes the protector of the animals. In “True Identity” by Tom Peyer and Alan Robinson, we learn what secret anguish drives the most beloved superhero on Earth! And Stuart Moore and Peter Gross’s “Bright Boy” tells the grim tale of the world’s smartest human and the havoc he leaves in his wake.

“Steel Cage” presents us with three entertaining shorts ranging in style, tone and genre, from the superhero origin in “True Identity” to the potential villain narrative of “Bright Boy” and the friendly sci-fi youth adventure in “Noah Zark.” Each vignette packs in quite a bit of content for its abbreviated length.

Confused? Understandable, but we really should be delighted: it’s rare that we get to see ashcans and even rarer to see fleshed-out pitches, and Ahoy decided to put together three of them to drum up some reader participation. Even though only one will win out, it’s an excellent chance to take a look at three creative teams and see what they can do together.

“True Identity” is a fun take on the Captain Marvel-style wholesome superperho, with notes of the mournful loss of family and home we often see in Superman. Except, instead of an 8-year-old boy or an alien sent far from home to avoid a cataclysmic disaster, Penultiman’s exiled from 90,019 BCE to our time to live out his days away from his creator and de facto parent, Geg-Roxiplax, along with everything he knows. He’s not doing such a great job of fitting in so far.

Peyer and Robinson blend Golden and Silver-Age sensibilities in this story while poking gentle fun at the tropes that make superheroes tick. Robinson’s facial features are properly exaggerated without too much goofiness, and there’s a nice focus on our main character’s physical form. The alien design is different and very tongue-in-cheek, considering. Loughridge’s colors are grounding in a reality not too far from our own, with some oranges, magentas and greens later on to contrast the more straight-ahead palette of our current Earth. Steen’s lettering is clear and concise with a few sound effects thrown in for flavor. There’s nothing too fancy about the font, and that suits the story just fine.

“Bright Boy” features a different and more dubious kind of hero. There’s a potential power grid meltdown that could result in nuclear apocalypse, and a genius is called in to try to avert it. He also happens to be a total jerk, and has a very dangerous backlash power that pops up when he’s overexerted himself mentally. Much to the detriment of all around him.

Moore and Gross also put together an entertaining story, with some digital updates on the kind of sensationalized art that’s common in crime and horror serials from bygone days. Gross uses some stark inks to pump up this effect, but facial expressions and details aren’t always consistent for each character across the piece. Layouts are pretty standard until the cataclysm later in the book, which features some nice curved panel borders and a few cool effects as things go haywire. Earlier on there’s some intentional crowding with technology and some not-so-intentional crowding with a few too many characters to feature properly on a page. Some of that is down to the colors, which don’t vary enough to distinguish insets or properly frame backgrounds, but the story’s entertaining and it ends on the best cliffhanger of the lot. Steen’s lettering is consistent throughout each story, and some variation in the font would be nice to distinguish each, but it’s serviceable and keeps everything legible.

“Noah Zark” is definitely the most whimsical and outwardly imaginative story of the three. Waid and Souvanny keep the tone hopeful and chipper until we realize what’s actually going on aboard Noah’s idyllic little ship: fleeing from a cruel circus that’s kidnapped its animals. Souvanny’s line is precise and gentle, with rounded details and endlessly cute animal design to tug at our heartstrings and maintain a good deal of visual interest. We get to know Noah a little more than the protagonists of our other two stories. The watercolor style colors suit the art, though there are spots where the gentle washes transform abruptly into a background with minimal texturing or shading. The colors are bright, fun and engaging, however, and Waid’s writing is appropriately bouncy, action-packed and youthful. Steen’s lettering here is arguably the most jarring, and some of the sound effects don’t complement Souvanny’s art style.

I’m exempting myself from choice, here, and leaving it up to the rest of you to decide. All of the stories have potential in different ways. “True Identity” demonstrates a good sense of humor and enough pathos to possibly sell a superhero origin, which is very difficult to do these days. “Bright Boy” could get into some decent, tense sci-fi territory. “Noah Zark” has the potential to be a book that kids and their parents can enjoy in equal measure. Each story feels a bit melodramatic, but that’s down to the dueling nature of the book itself. It’s important to kick things off with a bang and show some storytelling range. A full issue of any of these stories would be a fun read.

Final Verdict: 7.0 – “Steel Cage” #1 pits three decent shorts against each other and leaves it up to the reader to decide which merits a full issue.