I’ve discussed my love of science fantasy comics before and “Stellar” #1 hits right in my sweet spot. You have oodles of strange aliens, an escaped superweapon/woman with a mysterious past, and a pantheon of evil space wizards. None of those ideas are novel; they’re cliches that I know I like. As with any story retreading familiar ground, execution is everything. Fortunately, “Stellar” #1 has enough talent behind it to create a worthwhile comic- but that endorsement comes with a few caveats. 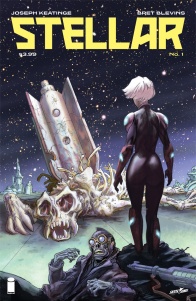 Stellar was taken as a child and transformed into the ultimate weapon, one that would end an intergalactic war. She succeeded…at everything except finding peace. Reduced to a bounty hunter, she scours the worlds she’s broken, searching for redemption. But there are other weapons loose in the galaxy, who just can’t leave the war behind them. JOSEPH KEATINGE (GLORY, SHUTTER) and legendary artist BRET BLEVINS (New Mutants, Sleepwalker) will transport you to another dimension, filled with crashed spaceships, fast-talking aliens, and ageless wonders.

There is a major hurdle to getting into this new series. “Stellar” asks the reader to commit. There’s precious little in the way of explicit exposition and the book asks you to really focus on all the ambient worldbuilding. Stellar, our tight-lipped protagonist, is escorting a bug-eyed alien . . . somewhere. She doesn’t say much in the way of specifics, but a few handy flashbacks fill us in on the details. She’s got crazy cosmic powers, she feels guilty about all the people she’s killed, and there are more beings like her who have less than noble intentions.

Like I said, none of those ideas are too original. Writer Joseph Keatinge takes the reader for granted. If you’re like me and you are already bought into this sort of story, great. For those who are unsure if this is the comic for them, I can see the density as a tough barrier of entry.

Fortunately, words are only half the story. This comic is drawn by none other than legendary “X-Men” artist Bret Blevins and, damn, is it good to have him back. From the very first panel, “Stellar” establishes a confident style. You can tell by the indigo skies this is supposed to be a dark story but the sweeping landscapes are breathtaking. Every page is packed with so much detail that this could have been a silent comic and still have told a great story. The main characters walk through the remains of shattered statues, and impaled robots the size of skyscrapers. Some spaceships have a retro 50s design and some are made of what I can only describe as Egyptian biotech. A government office is in the corpse of a giant something. The world that Blevins draws is worth the cover price alone.

Even with such disparate elements, there’s a unifying sense of style that bind the book together. Every location has a unique color scheme and despite the varied sources of inspiration, Blevins has a clear sense of design. It’s unique, and a bit hard to describe, but I’ll try. It’s like if “Saga” was written by Joel Schumacher but drawn by James Stokoe. It’s a combination of gothic whimsy and sheer nauseating busy-ness.

The artwork is also particularly stunning in the micro. Every line is just a little bit too jagged and every shadow makes the flat surfaces pop. One particularly stunning effect shows the terrifying might of Stellar’s powers. You’ve seen an inferno rip the outsides off of hapless soldiers before, but never like this. It looks like an image from an early Vertigo book (think “Sandman” or “Hellblazer”) but using digital effects that didn’t exist back then. It’s cool to see an artist with old-school sensibilities challenge himself later in his career. Blevins delivers.

The story is slight and predictable. It’s also just starting. As this series continues and is given room to breathe, the complex mythology will have time to present itself. Keatinge knows what he’s about. He proved that with his phenomenal work on titles like “Glory” and “Shutter.” I can trust that the specifics of this universe will do a bit to distinguish it from series like The Voidwitch Saga. Until then, I’m happy to interpret the art focus as a deliberate creative decision.

I’d call “Stellar” a wait and see. Unless you’re a die-hard Blevins fan (as I clearly am) or a connoisseur of stories about space magic (as I also am) this first issue needs to do more. It works as a beautiful showcase for a talented artist, but only as a middle-tier plot. Fortunately, I’ve had a chance to look ahead at previews of future issues, and I’m confident the story will pick up. This isn’t a decompressed issue, there’s enough content to be worth your money but if you aren’t sure, there’s always the trade.

Final Verdict: 6.4 – The wonderful alien vistas are worth the price of admission, but unfortunately the story in “Stellar” #1 is a bit too slight.