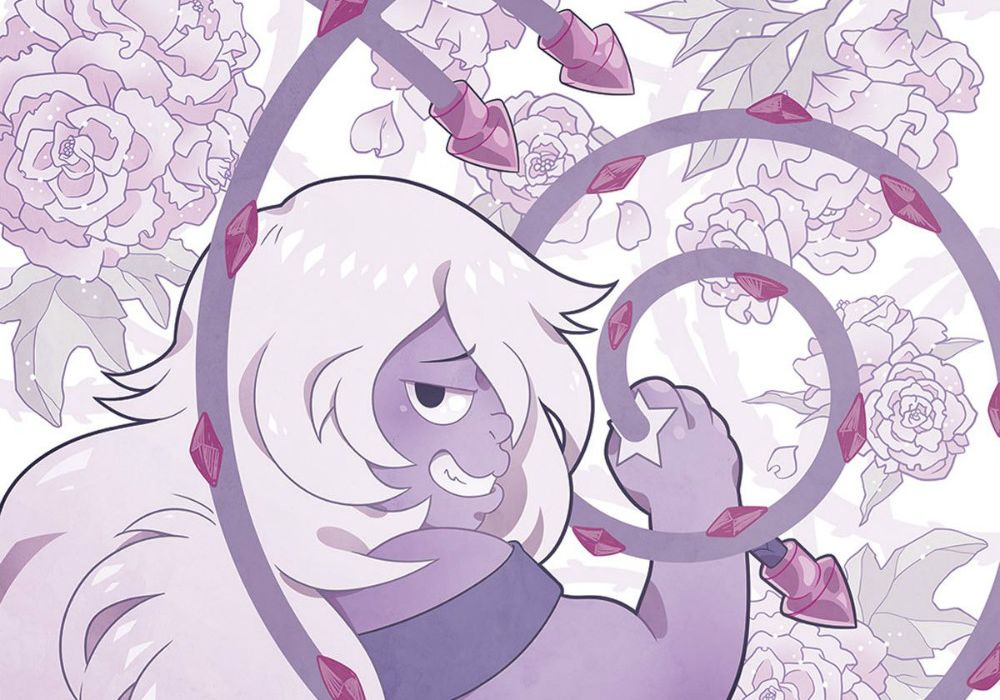 Boo Box have had some serious success adapting popular Cartoon Network series to comics, and “Steven Universe” is no exception. The first issue of the new series rang true to the highly socially aware show’s roots, but can the momentum follow on into the second issue? 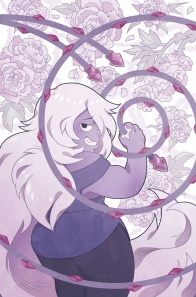 When the local business owners in Beach City start to feel the economic pinch during the tourist off-season, Mayor Dewey and Buck come up with a solution: food trucks!

Unfortunately, for those who were excited by the solicit text, none of that story is to be found within these pages. Sorry! What we do get is a pretty good story that will mostly ring true with fans of the of show, but could prove to be inaccessible to newcomers. That being said, the main audience here would already be fans of the show, so it’s not a huge issue.

Melanie Gillman manages to nail the voices so much that I could hear the voices actors talking in my head as I read along. Connie feels like a true to from Tumblr girl when she talks about the movie adaptation of The Spirit Morph Saga, a book series in the SU world. However, the story mostly focuses on the Steven/Connie fusion Stevonnie, and her potential relationship with fellow Beach City resident Kiki. It’s pretty forward thinking, as not only does it explore high school relationships in a realistic light, but also showcases queer relationships as something normal, which is amazing considering the younger audience of the book.

Story-wise, it’s quite grounded compared to the show. It’s still a good straightforward story about teen romance, but considering we’re only two issues into the series without any serious crystal gem events, it seems like a missed opportunity. It’s understandable, considering that the show has a well-established canon so you can’t have anything major happen in a tie-in series. Nonetheless, the only particularly otherworldly event that occurs in this issue is a fusion between Steven and Connie, and even then it takes place off-screen.

However, it is a lot of fun to watch the relationship between Kiki and Stevonnie unfold. Although the tie-in series might not be essential, it proves it’s worth here by building and developing minor characters. Kiki has only had one or two episodes to herself in the show, so it’s great to see her used to well here. Gillman understands her reserved attitude without resorting to shyness, which makes her much more interesting as a character.

Adapting an already hand-drawn visual media to comics is not always easy, and even harder to make it feel unique. Thankfully, Katy Farina handles art duties capably here. It’d be easy for the art to fall into the trap of looking just like screenshots of the show (and honestly, that wouldn’t even be that bad), but Farina manages to charge it up with sequential energy so it feels just like you’re watching the show. One of the best sequences involves Pearl escorting Stevonnie and Kiki to the dance, which is drawn without accompanying dialogue. Yet we get everything we need to know just from following the panels. On top of that, Farina doesn’t leave any inch of the scenery boring, with one including Lars and Sadie jealously watching the couple from afar.

I would go as far as to say that the art has a chance to be tighter and more refined here than it does in the show. Considering in animation there’s a lot more to draw, this makes sense, but it does give the comic a certain edge. Farina is able to bring a lifelike quality to environments like the Crystal Gem’s temple, giving the scene great camera angling and use of space to accentuate how grand and ancient the temple is. Another subtle advantage of having more detailed environments is in the High School Dance scene. The whole room is filled with people that all have a sense of personality, not just stock characters designated to be fillers. It gives the scene a very authentic feel, and feels really lived in.

Farina is also adept at understanding and drawing the dynamic facial expressions of each character, something which the show is notable for. Right from the start, both Steven and Connie have great chemistry working off each other, and Farina pens them both naturally. It’s hilarious to watch Connie go from excited, to concern for the movie’s quality, to downright disappointment all in a few panels, and says a lot about the skill of the artist.

The colors here are a big part of the vibrancy and fantasy-like tone of “Steven Universe” and colorist Whitney Cogar manages to knock it out of the park here. The script calls for a diverse set of environments as previously discussed, and Cogar renders each one originally and distinctively. I’m a big fan of the chalk-like shading technique she uses in each setting, as not only is it reminiscent of the show’s art direction, but gives a sense of realism each time it’s used, even for an outwardly cartoon show. Some of her best work is simply done on negative space – specifically, in the scene where Steven and Connie debate what to tell Kiki, the colors and shapes in the background reflect each character’s current mood, adding that extra layer of immersion for readers.

“Steven Universe” #2 is a solid continuation of the Boom tie-in series. Although it may not feature the next-level fantasy elements of the original show, Gillman, Farina and Cogar manage to tell a very human and mature story about relationships with the backdrop of an all-ages cartoon show. This is a must buy for fans for the series.

Final Verdict: 7.6 – A great standalone story highlighting some of the show’s overlooked characters, “Steven Universe” #2 is a simple story with a lot of heart.