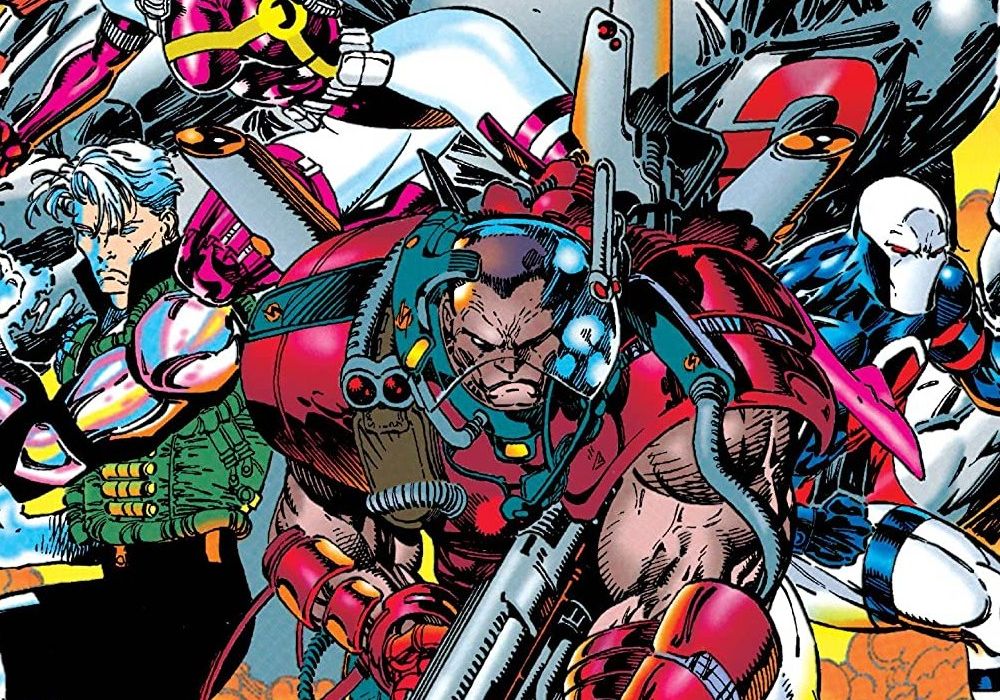 It blows my mind when I stop and think about how mainstream superheroes have become in recent history. I mean, I remember a time when kids tore up my comics so to see these characters embraced like this is really something. In this day and age, even once-obscure characters like Star-Lord are known far and wide. Still, there are even more superheroes just waiting to be introduced to the masses! Heroes like…let me just check my notes here…Diva? Hellstrike? Battalion? Jeez. Well…maybe we hold off on these for a while. 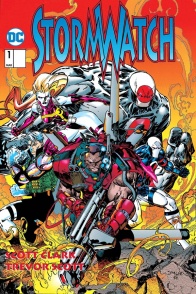 Written by Brandon Choi & Jim Lee
Illustrated by Scott Clark
Lettered by VC’s Travis Lanham
Colored by Joe Chiodo
They are StormWatch, the world’s most elite anti-terrorist super powered strike force. There’s Battalion, field commander, empowered with psionics and armed with a battlesuit that gives him the firepower of his namesake. Fuji is a mountain of a man from Japan whose super human strength is only matched by his great heart. Diva is a South American beauty with alabaster skin and a scream that can literally shatter steel. Hellstrike is super-fast and can project powerful force bolts. Winter, a hero from Russia, can absorb and manipulate massive amounts of energy. And residing over them all, high above in the orbiting space station Skywatch, is the Weatherman, a cybernetically enhanced commander with eyes all over the world, ever vigilant and uncompromising when it comes to planet Earth’s safety. When Battalion’s younger brother gets caught in the crossfire in a battle between StormWatch and their malevolent counterparts the Mercs, the young man’s life will never be the same again.

So, just to be perfectly clear here, I am not familiar with “Stormwatch” or the larger Wildstorm universe. Years ago, I picked up a trade paperback of “The Authority” from my local library. When the New 52 kicked off, those guys (Apollo, Midnighter, Jack Hawksmoor etc.) were Stormwatch so I thought this comic was about them. Spoiler alert: It’s not. Did my lack of knowledge and context impact my reaction? Of course it did. For example, this issue vaguely references other Stormwatch teams and the ‘academy’. Diva and Razer clearly know each other…again, I’m going in blind here.

“Stormwatch” #1 mostly revolves around Jackson King, Battalion, leading a new version of the U.N. sponsored super-team Stormwatch up against a deadly band of super-mercenaries. Jackson also struggles with the loss of his friend and having to deal with his troubled younger brother, Malcolm, a seedling.

So, for multiple reasons, I didn’t enjoy this issue all that much. One of the main reasons is the characters. For a team book, we really only get to know Battalion. The other members of Stormwatch are basically just window dressing. Next to no insight is given into their personalities, relationships backgrounds…heck, I’m not even clear on some of their powers. I assume Winter has some cold powers? He called a teammate ‘comrade’ so maybe he’s Russian. Your guess is as good as mine. Fuji, presumably named after the mountain, has a habit of calling everyone ‘Battalion-san’ or ‘Trelaine-san’ which feels…I mean…do with that what you will.

Another strike against this comic is the narration and dialogue. The narrator is monologuing in a dramatic fashion the entire issue. I found it pretty off-putting…I just think there’s a better way to give the readers exposition. As for the character dialogue, I realize that superheroes aren’t ‘normal people’ but come on. Nobody talks like that. The mercs call Stormwatch a ‘motley crew’. Stormwatch response is positively scathing, calling them a ‘miserable band of mercenaries’. I mean…did that sound threatening to either of you? Malcolm and his little friends aren’t much better. They think their situation is ‘whacked’. You feel me ‘homeboy’?

It is all just so ’90s. This issue doesn’t shy away from the conventions of the decade, it revels in them. I imagine that “Stormwatch” #1 may have felt more fresh at the time but reading it today, it feels very dated. Some comics feel timeless and this is definitely not one of them. If you never told me what decade it was made, I could still guess it right. Characters have names like ‘Razer’ and ‘Slayer’. Battalion has psionic powers, which means telepathy and/or telekinesis, but only uses his big guns.  The comic isn’t going for subtlety here. The moment Battalion declares ‘I’m bringing everybody back!’, I knew he wasn’t bringing everybody back.

That general ’90s-ness extends to the artwork as well. Scott Clark’s pencils seem to take a lot of inspiration from both Jim Lee and Rob Liefeld. Honestly, it feels like a perfect mix between the two, right down the middle.  Again, outside of the decade, this art-style all feels very dated. There’s plenty of comic book-y action going on. Extreme emotions, explosive punches and kicks, energy blasts going to and fro, big Cable-esque guns…nothing during the fight scenes is small or muted. It’s all very ‘big’ if that makes any sense. Then we’ve got Synergy answering Jackson’s door in the shortest dress possible and posed like a pin-up model. Stuff like this is just cringeworthy now and I don’t think it’s aged well. In general, the proportions of the female body feel a bit cartoonish here. Everyone’s muscles are rippling, everyone seems to be striking poses.

The costume designs are either bad or not very memorable. You know the decade, there’s a lot of pouches everywhere. Arm pouches, thigh pouches, so on and so forth. It feels like these characters are knock-offs of the genuine articles. Fuji definitely takes after the Hulk while Razer is a dead ringer for Medusa from the Inhumans. Kilgore is the poor man’s Wolverine. I actually thought it was Wolverine for just a second. No one else is wearing that haircut, that’s for sure. The mercs leader, Deathtrap, looks just like Deadpool, right down to the red costume. Diva’s costume in particular is laughably bad. Her whole blue butt is out, I mean the bottom half of her costume is basically a thong. It is…it is all just a lot.

If you weren’t reading comics in the ’90s, well, I guess you just had to have been there. However, if you are feeling nostalgic for that decade, I have to say that “Stormwatch” #1 is the book for you, ‘homeboy’.