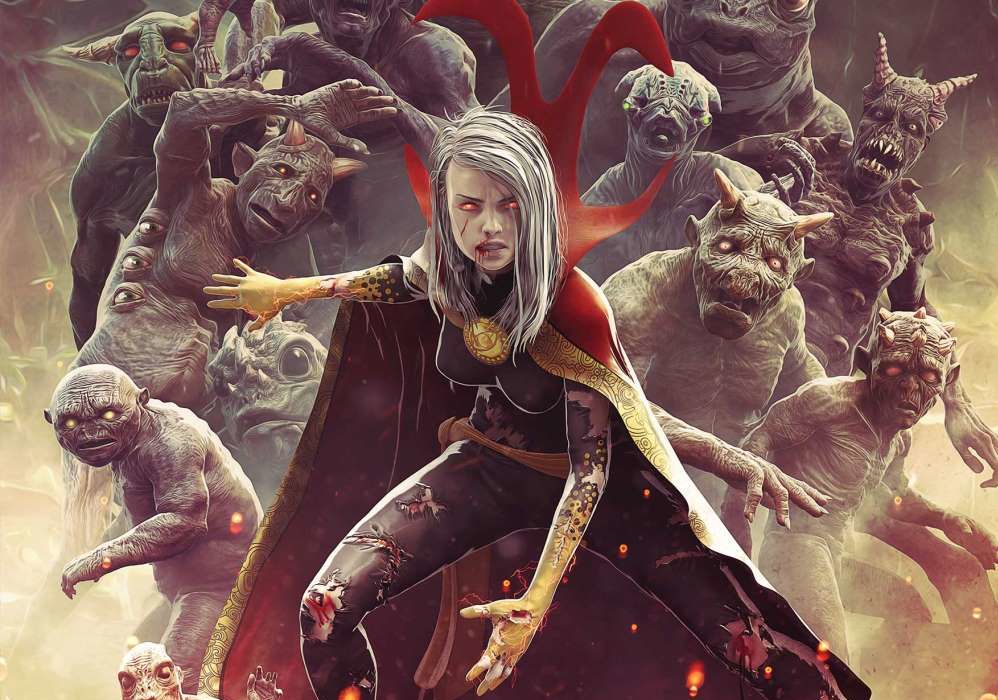 I’ve grown to really like substitute hero stories. You know the type, the hero is missing, or dead, or depowered, so a member of their supporting cast has to step up and take the mantle. In “Strange,” the usually titular doctor is dead, and so the story follows his sometimes wife, Clea. Strong characterization makes this book worth reading, but issues of artwork and pacing hold this series back from realizing its true potential. 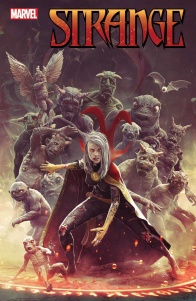 Someone is preying on the misery and suffering of New York’s citizens. Clea Strange is all too familiar with the demons and monsters that stalk humans. But what happens when it’s the humans who are hunting the monsters?

Clea is sort of a weird pick to be the hero of a superhero series. As a powerful magician from the Dark Dimension, she was raised in a culture of war and dominance. Killing is casual to Clea, and the niceties of Earth are mysterious. Fortunately, writer Jed Mckay doesn’t ignore this and in fact, leans into Clea in all her dark majesty. This is some of the best character work the character has ever had; she’s as haughty as her husband, and she yearns to prove herself to the villains of Earth-616.

Speaking of villains, Clea gets up close and personal with a couple of them. Some, like the Rose, are borrowed from other books. But the Harvestman and the Blasphemy Cartel are brand new, and both have the potential for some staying power. It’s not like Doctor Strange had a deep bench of memorable villains, so it’s great to for Clea to have a new archnemesis or two, and I can’t wait to see them go up against other heroes in other comics.

There’s a lot of action in this issue. It moves at a quick clip. After threatening organized crime, Clea battles a horde of minions, turning a whole bunch of them into stone in the process. That action captures dynamic moments, but lacks a strong feeling of ‘place.’ The main fight took place nebulously in some dark area of New York City that seems to mostly be smoke and a navy blue blur. The panels make sense, you get a splash page at exactly the right moment. But those panels feel like they are floating, untethered from the story.

Marco Ferreira is an artist who has been regularly putting out comics for some time. He’s not new to the game. I like the foundations of his style. He has a simple style that’s more Kirby than Ditko, though a better comparison may be with Darwyn Cooke. I once saw Cooke draw row after row of DC characters’ faces. There were a lot of white dudes with dark hair, but Cooke made them all unique, using very few lines. Ferreira shares Cooke’s ability for simple specificity with character design. The Rose’s mask is blank, but the way it folds over his mouth is all him. There aren’t all too many named characters in “Strange” #3, but Ferreira’s design work in the series has been strong.

Still, his style is not without issues. I’m thinking mainly of the huge pointy boobs he draws on Clea. They are distracting, and the art draws your eye to the object at the center of its gravity, and that is always boobs. Look, I’m not new to superhero comics. I know this kind of thing comes with the territory sometimes. If I was scared off by massive bazoongas, I wouldn’t have read many comics at all as a kid. But Clea’s skintight costume is in a special league. It looks like shrink-wrap, contorting to her every crevice. She has abs that look like they could be storing loose change between them.

It’s not like Ferreira is doing something new, and it’s not like this is the most objectionable thing Marvel has done in the last month. But it’s kind of galling. What’s supposed to be a big push for Clea is going to be embarrassing to recommend to friends. Marvel is making hay out of replacing a straight-white-dude hero with a powerful woman, but then release a book with art that makes its hero look like a freakish blow up doll.

The beginning of this issue is the confrontation between Clea and the Rose, and the last bit introduces a new villain. The whole part in the middle though is that floaty fight scene. Though well constructed, the beginning and end of the issue suffer. Those scenes could have just been a stretch longer, and surely there were some pages of the fight that could have been shaved off.

Jed McKay is a first rate artist, and Marcelo Ferreira is capable of good work. “Strange” has been a fun story so far, but as far as comics go, it’s just OK. With an excellent actress (Charlize Theron!) set to play her in the MCU, it’s clear why Marvel wanted some more comics featuring the famed female Faltine. Hopefully “Strange” will get its act together, because there’s a really good series waiting to hit its stride.

Final Verdict: 7.0 – Beyond issues with the artwork, “Strange” is a fun superhero ongoing.