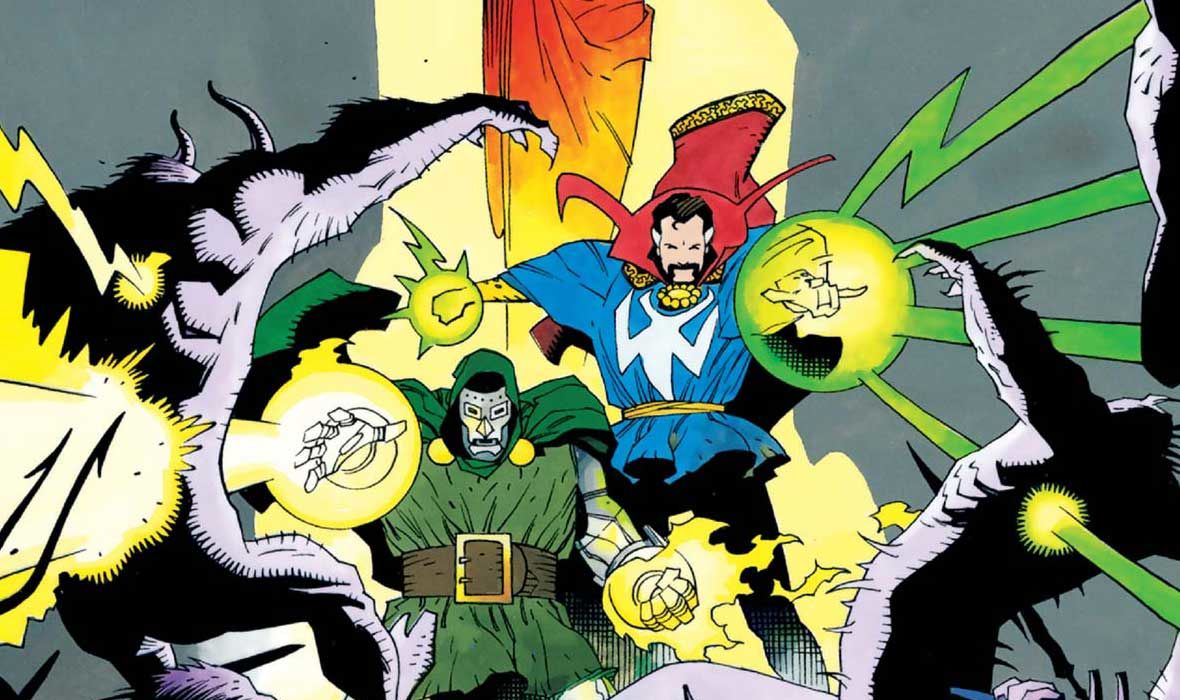 Back in 1989, when Hellboy was still two years away from even being a sketch on pamphlet, Mike Mignola paired with writer Roger Stern and colorist Mark Badger to tell the story of dueling masters of the mystic arts, Doctor Strange and Doctor Doom. This original graphic novel is still one of the most prolific superhero stories Mignola did before his creator owned era, so we’re taking a trip back in time to see whether this book can be counted among the classics. 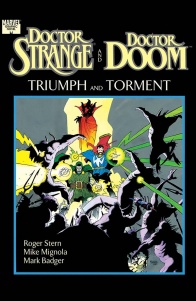 Doctor Doom and Doctor Strange enter Mephisto’s realm in an all-out effort to free the soul of Doctor Doom’s mother! But what price must be paid before Mephisto will release it? And will Doctor Doom make the sacrifice?

So, before we get into the Mignola of this all, I thought I’d take the time to talk about how good a job Roger Stern does on the script for this book, I don’t think the actual minute-to-minute dialogue is anything special, but his scale and articulation of every scene feels like near-perfect storytelling. This is especially apparent in his handling of Doctor Doom and how eloquently he informs the readers of Doom’s history, learnings and manner. 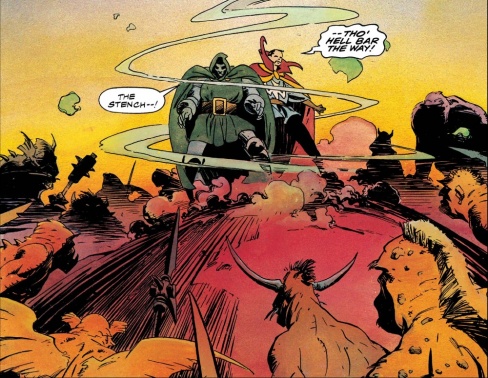 “Doctor Strange and Doctor Doom: Triumph and Torment” is essentially two different stories melded together, and while the connection between these halves is VERY convoluted, both stories are full of their own great quirks and personality. The adventure in the temple of Vistani does feel a little like plot-chaff, but magic tournaments are never not going to be awesome, so it gets a pass. In the second half though, Stern’s script really takes off, Doctor Doom and Stephen Strange’s fight through hell is so fucking metal and has this incredible pace to it. 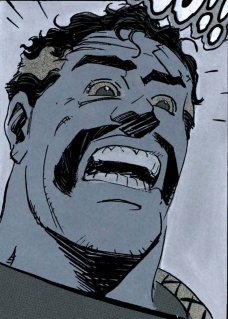 Is that the Comedian?

This is also Aged Genghis’s last ever appearance (although he does get a nice mention in the recent “Doctor Doom” #1), and it’s a fairly good send off to a pretty questionable character. I like the idea of a wizard who’s so deeply entrenched in magic that they’re letting their body starve out of forgetfulness. It also wins him the award for best impersonation of a human raisin. Uncomfortable Fu Manchu stereotypes aside, I think he served as an interesting anchor for the whole plot without bogging the story down in exposition and canned tropes.

This book does a lot to sell the psychology of Doctor Doom in a way that really brings him past the one-note status he has as an FF villain. Early on there’s a great piece of symbolism where Doom’s original scars are a fairly minor disfigurement, but in his efforts to hide them behind a mask he brutalises himself far worse, it’s a nifty piece of characterisation. I also love the quiet confidence he has throughout this; he’s even humble at times, I feel like everyone except the Fantastic Four is able to get along with Doom pretty good, he’s just an abrasive personality who they’ve mistaken for pure evil. 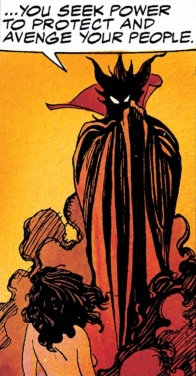 Give me a Cynthia Von
Doom series this instant

Stern also portrays Strange and Doom as a very complimentary pair of doctors, they’re both men who approach magic from an analytical perspective, which means when they do disagree with one another their contrasts become that bit more stark. This all culminates in the final ultimatum presented to Doom that highlights both his uncompromising attitude and hidden empathy in a really really layered and interesting way. This whole book is just smarter than it has any right to be, I mean it ends with a Stanley Kunitz quote!

All right, time for the main attraction, Mike Mignola’s artwork. I feel like Mignola really found his personal style with “Hellboy” (and even then it spent some time tightening up), but this book is a pretty clear precursor. It’s just so fun reading stuff like this and “Gotham By Gaslight” where Mignola is getting so close to finding his genre, you can just see all the puzzle pieces splayed out in front of him and it’s so gratifying to watch in retrospect. The whole thing has this fun Steve Ditko by way of Frank Miller feel to it; craggy faces and bulky bodies galore. And I’m going to emphasize bulky bodies seeing as Doctor Strange is super ripped in this even though he has really no need to be, it’s such a spectacle. The color work by Mark Badger is amazing throughout as well, full of muted greenery clashing with neon-bright magic. But yeah, Ditko and Miller smooshed into one, the style of the ’60s with the crisp linework of the ’80s. I love the framing of each shot and the distinctive, geometric figures of Mignola’s characters. They feel so defined and distinctive even when they’re rendered with 8 lines and a splotch of color. It’s that same ability that keeps the eye anchored so perfectly throughout and allows Mignola to get more and more visually complex without losing his figures in the midst of it all.

Well, that’s “Doctor Strange and Doctor Doom: Triumph and Torment!” I’d definitely suggest giving it a read through Marvel Unlimited or your local library, if you’re especially enamored with it then get in paperback, it’s a really fun read to come back to and I’m sure you can find something new to hone in on each time you read. 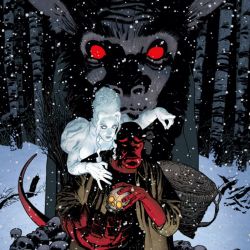