Two of the most identifiable names in comics, Mark Waid and J.G. Jones, come together to bring a story that is outside of the standard for both creators and, really, for comics in general. Keep reading for our spoiler-free review. 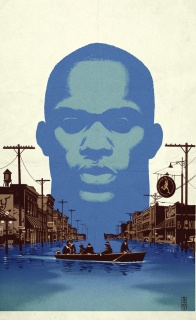 Strange Fruit #1 (of 4)
Publisher: BOOM! Studios
Authors: J.G. Jones and Mark Waid
Artist: J.G. Jones
Format: 32 pages, full color
Price: $3.99
On sale: July 2015
Synopsis: It’s 1927 in the town of Chatterlee, Mississippi, drowned by heavy rains. The Mississippi River is rising, threatening to break open not only the levees, but also the racial and social divisions of this former plantation town. A fiery messenger from the skies heralds the appearance of a being, one that will rip open the tensions in Chatterlee. Savior, or threat? It depends on where you stand. All the while, the waters are still rapidly rising…
Two of the industry’s most respected and prolific creators come together for the first time in a deeply personal passion project. J.G. Jones (Wanted, Y: The Last Man) and Mark Waid (Kingdom Come, Irredeemable) take on a powerful, beautifully painted story set during the Great Mississippi Flood of 1927. Strange Fruit is a challenging, provocative examination of the heroic myth confronting the themes of racism, cultural legacy, and human nature through a literary lens, drawing from Southern folklore and tradition.

There’s one elephant in the room here that I feel needs to be addressed before we go any further: this is a book very much about race, written and illustrated by white men. Now, I am not saying that they are not qualified to do so, nor am I saying that they handle this sensitive topic without grace or tact, but I think that fact needs to be stated. Both men are from the South, and both older than me, and so both potentially grew up in towns far more overtly racist than the Mid-Atlantic boroughs where I’ve lived most of my life. This isn’t a problem with the book as a concept, nor does it play out in the pages, but I felt it needed to be mentioned.

This book is hard to nail down in an easily quotable description: this is part historical fiction, part morality play, and part sci-fi all rolled into one. The mixture is an interesting one, as every time one piece starts to dominate the action, one of the others swoops in and changes the tone in such a way that it refreshes the tone of the story. If anything, the book sometimes weighs a little too heavily on the morality play aspect of it, giving the reader broad stereotypes of the evil Klan members and the righteous senator trying to do right by his constituents of all races.

The story is set in the Mississippi during the great flood of 1927, a truly horrific event in American history. Nine states were affected by the flooding, and over 400 people lost their lives as a result. This book takes place in the early stages of the flood, before things turned truly horrific, but tensions are rising. Chatterlee is about to feel the effects of the flooding, and many of the white folks in town seem to expect all of the African Americans to make sandbags for the levee. The town is a powderkeg, just waiting to explode, and each panel brings them closer and closer to that seemingly predetermined event.

From the title onward, it is very clear that this book is all about race – for those unaware, “Strange Fruit” is a song, made famous by Billie Holiday, that is about racism and, specifically, lynchings (the bodies on the trees being the ‘strange fruit’). It has long been a song that represents the worst of American history, and the term has come to represent an attitude of tolerance and anti-racism. Every page in this book drips with racial tension, and no action can be taken in a vacuum – race informs every single bit of this book, aside from the rains. Water, long a symbol of purification and rebirth, is set to destroy this land, and with it both the racist white folks and the put upon black ones. Nature has no bias.

Just like superhero or noir stories have their cliches, there are certain elements that seem like they must be present for any book set in the South between 1700 and 1975 or so. Obviously, because of the book being set during a real event, there are certain elements that would be irresponsible to ignore. That said, aside from the book’s big moment (which we will get to later), there isn’t a lot here to differentiate it from many other stories set in a similar time and place.

Mark Waid is a writer with a history of writing stories that have a ton of heart, and are socially aware. This is more the latter than the former. These characters are written quite broadly, and we don’t spend enough time with any one character to really get to know what makes them tick outside of base descriptions like ‘racist Klansman’ or ‘scared African American.’ Sure, all the speech seems era-appropriate, but without too much investment in these characters, the book falls a little flat in parts. Given more time with these characters, I have no doubt that Waid can and will give us some more meat, but for this issue, it can be a little challenging to care about the characters.

The one element that does elevate this is the art of J.G. Jones. His heavily detailed, cinematic style brings a prestige to the work that ups the intensity and allows it to transcend the sometimes cliched portions of the story. In each panel, Jones chooses the most dramatic layout, creating a look that sometimes more closely resembles classically influenced fine art than a comic. His style is timeless, and so setting the book 88 years ago does nothing to mess with his artwork. In fact, seeing Jones in this context, his art might actually be more suited to telling a dramatic story set firmly in reality rather than a superhero story.

His work here, in a way, reminds me of his work in “Before Watchmen: Comedian,” as he is fully embodying the period in which the story is set, and letting the more overtly fictional parts of the work melt into the realistic style seamlessly. Jones does a masterful job of creating fear and hatred in the faces of these characters, and the world he created feels lived in and authentic. His work can, at times, be a little static and deliberate, but again, this story is one told with a clear eye towards the classics, and so presenting the book as something less fluid than your traditional action packed comic isn’t really a problem.

Jones is also listed as co-writer on the book, and Waid has said in interviews that Jones has been wanting to tell this story for a long time. His artwork shows that – this is not some tossed off miniseries; you see the passion and care in every character’s furrowed brow or wrinkled shirt. It is in Jones’s enthusiasm that this book thrives – without his drive, this book could very easily fall flat.

The book isn’t just a bit of southern historical fiction, as a little more than halfway through something big happens. The solicit hints at it, and I’m not going to go into too much detail here, but I do have a few thoughts about it. If you know anything about Waid, as a fan, you’ll know that he is a Superman fan of the highest order. The ‘fiery messenger from the skies’ has more than a little Superman in him, but done in a way that is unexpected, and yet feels almost inevitable, especially for this story. This is the part of the story that seems to be more Waid than Jones, as Waid manages to do a few bits that are so perfectly either out of Superman mythology, or twisted bits of Super-mythos, that they could only come from the mind of Waid.

In fact, this book most reminds me of another Waid work, “Kingdom Come.” Alex Ross and JG Jones aren’t the same artist, obviously, but both books see Waid helping shepherd an artistic vision to life, and doing his best to help script the book for an artist with limited writing experience. It, also like “Kingdom Come,” can be a polarizing read – gripping at some points, and a bit reductive at others. Waid and Jones clearly care a lot about the folks in this story – or at least the folks that aren’t horrible, horrible people – and any concerns about two white men handling a book about racism in the deep south needn’t worry.

Final Verdict: 6.1 – An intriguing start to a series that, hopefully, can back up its artistic ambition with some more developed characters going forward.