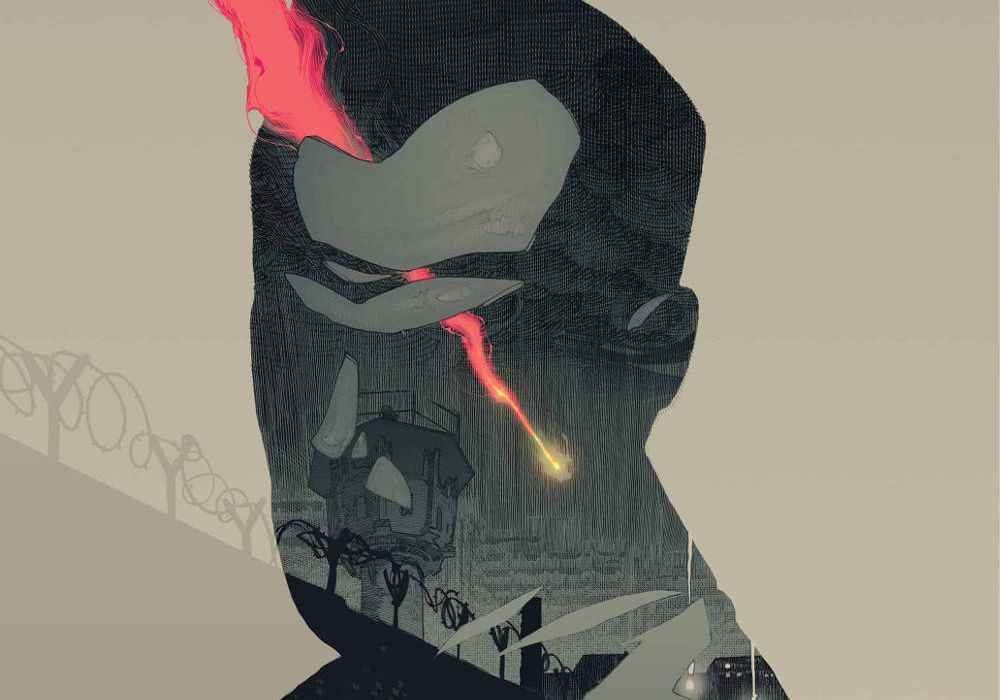 If “Strange Skies Over East Berlin” #1 is a Cold War spy thriller mixed with a healthy dose of an alien invasion story. It’s an interesting idea to get a glimpse of what Cold War science fiction and alien paranoia must have looked like from the other side of the Iron Curtain.

To put it in terms of people who might not know very little about the Soviet Union or the Cold War, it’s kind of like if Stranger Things and Area 51 happened in a part of the world where governments were even more paranoid than our own and made spying on everyone a very open secret. 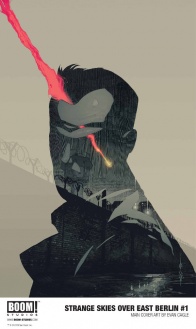 BOOM! Studios is proud to continue The Road to San Diego, a ten-day spotlight on the most exciting comic book and graphic novel news in advance of Comic Con International in San Diego (July 17-21), with the announcement of STRANGE SKIES OVER EAST BERLIN #1, an all-new original four-issue limited series from Jeff Loveness (Judas) and artist Lisandro Estherren (Redneck, The Last Contract), featuring cover art by Evan Cagle. STRANGE SKIES OVER EAST BERLIN is a chilling and intense thriller about an American spy who encounters a terrifying inhuman threat at the heart of the Cold War.

It’s 1973, and Herring, a disillusioned American spy, has spent the entire Cold War infiltrating the inner circles of East German intelligence for a cause he barely believes in anymore. He’s seen everything and done anything his government asked but his latest mission pits the brilliant embittered operative against an enemy force so vast it could obliterate all of humanity.

“Strange Skies Over East Berlin” #1 is a Cold War spy thriller that works to evoke the titans of the genre like John LeCarre and Graham Greene. The story follows a CIA asset stationed in East Berlin named Herring: a man caught between funneling information to his handlers, helping people escape from East Berlin, and desperately trying to stay one step ahead of the omnipresent East German secret police known as the Stasi. All is going as well as can be expected for a man in Herring’s position, right up until the point where a strange light is seen hurdling towards East Berlin and lands on the Soviet side. Now, Herring has to juggle the agendas of two masters all while figuring out exactly what happened while avoiding getting caught and either sent to a gulag or shot.

Where “Strange Skies Over East Berlin” #1 excels is its portrayal of the systems and power structures that dominate the lives and ideologies of everyone in East Berlin and everyone invested in making sure their side wins the Cold War. It appears that writer Jeff Loveness has done quite a bit of research, and creates an oppressive atmosphere of paranoia where every phone call is monitored, every letter is read, and every conversation carries the risk of being overheard and reported. The story manages to create a great sense of tension and danger without having to get by on excess and spectacle. But the real highlight of the story are Herring bosses: the CIA handler and the Russian matron that was sent by the Soviet government to investigate the incident. To both of these characters Herring is nothing more than a tool, something to be used and will be kept around as long as he gives them what they want. They also make it very clear that both the Soviet and American sides want nothing more than to live in peace, it’s just that they need to keep their guard up in case the other side tries anything funny. It’s cold, brutal, impersonal, and very well presented.

As for the aliens threat, the comic makes the wise choice to keep them vague and mysterious. The idea that there’s something out there, that both sides have no idea what this thing is but are willing to bet that the other side has something to do with it, and that the reader doesn’t actually see the alien but sees the effect that this strange thing has on other humans helps drive the paranoia and oppressive atmosphere home. It’s a great piece of writing and Jeff Loveness deserves all the credit in the world for making such a great artistic choice.

Unfortunately, while the background and support systems of “Strange Skies Over East Berlin” #1 are very well researched and written, the comic does suffer a slight hiccup with the main character himself. That’s not to say that Herring is a bad protagonist, it just seems that Herring would be more at home in a classic detective noir story than a spy thriller. Herring has all the trappings of the down on his luck private eye: a healthy dose of cynicism, a trench coat, a shady past that involves a beautiful woman that has suddenly left his life, and I wouldn’t be surprised if he had a drinking problem as well. To be clear, it doesn’t make “Strange Skies Over East Berlin” #1 bad, it just feels a tiny bit overwrought and out of place to see yet another hard boiled protagonist with an edgy inner monologue.

As for the artwork on “Strange Skies Over East Berlin” #1, it’s appropriately brown and gritty for a 1970’s Warsaw Pact city and has just the right atmosphere for a spy thriller. Artist Lisandro Estherren has an art style that is very evocative of Eduardo Risso, the artist who worked on Brian Azzarello’s ‘100 Bullets’ comic for Vertigo. The difference is that while Estherren has some similarities with Risso’s style in drawing humans with a deceptively simple line and heavy use of shadows, Estherren pays more attention to the background and setting of his stories. I will admit that I’ve never been to Berlin, but the nearly empty streets with austere architecture, coupled with top secret bunkers with plenty of exposed piping and unpainted concrete, definitely look like the East Berlin that I’ve seen in movies and read about in books.

The artwork is complimented by excellent coloring work, which does a very good job enhancing the atmosphere of the story and sucking the reader into the time period of 1970’s East Berlin. Again, my exposure to the 1970’s was through old movies and popular culture, but there was a definite look to the decade that involved a lot of shades of brown and sepia tones. Not only does colorist Petricio Delpeche do a good job in evoking that specific mood, but his use of darker and more earthy tones during scenes with human interaction and bright neon blues and whites when the mysterious aliens get involved is fantastic and a very good coloring to enhance and portray the mood of the story.

“Strange Skies Over East Berlin” #1 is a slow—yet strong—start to a series that opts to foster a sense of paranoia and distrust in its readers and immerse them into a setting and culture that dominated the lives and ideologies of most of our parents and grandparents. It has beautiful art, impressive atmosphere, and—with the exception of a some inner monologuing that might get a annoying for some readers—fantastic characters.

Final Verdict: 8.3-Once you get past a slightly annoying inner monologue, there’s a well written, no nonsense, and very tense spy thriller with an unknown, yet incredibly menacing, alien threat.