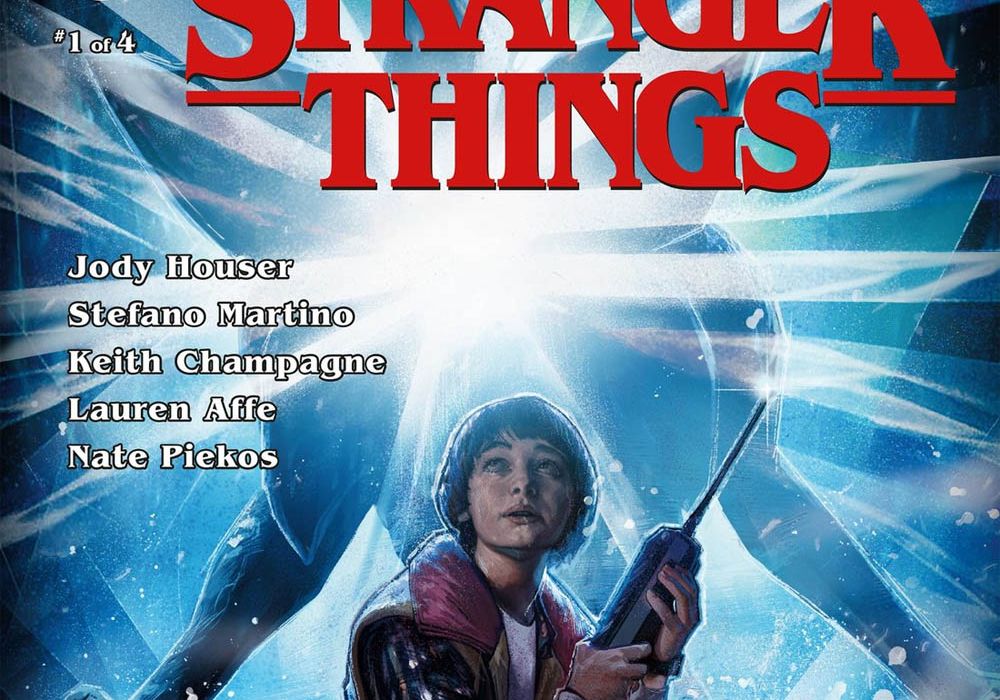 The Duffer Brothers’ Stranger Things has been a juggernaut for the Netflix platform from the day it launched. Combining ’80s nostalgia with horror and intrigue, it was a perfectly timed show to resonate with a young and older audience. With these traits, the show seems like a perfect fit to adapt to the comics medium. With Jody Houser, Stefano Martino, and more to bring this series to life, will it be a worthy addition to the series’ mythos? 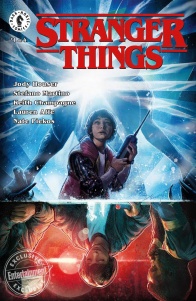 Will Byers is missing. The town of Hawkins, Indiana, including Will’s best friends and family scour the area looking for him. What they don’t know is that he’s lost in the Upside Down, an impossible dark parody of his own world. This grim realm seems desolate and empty, but Will isn’t alone!

The narrative focuses on the original lost boy of Season One, Will Byers. It gives Jody Houser a solid amount of off-screen content to explore in this comic and she uses her real estate well. Tonally, this feels like it could have been released in the latter half of the 80s. Houser gives Will a distinct inner monologue that could have felt right at home in an issue of “Uncanny X-Men”, yet manages to feel fresh and thoughtful, and is used sparingly enough to avoid being clunky. There’s also a lot of pop culture references that keep the comic very much tied to its 80s roots. Houser uses the metaphor of Dungeons and Dragons, which is used a lot in the show, to give a direct analog to Will’s actions in fighting the Demogorgon. Saying things like “THE ONLY WAY YOU SURVIVE AND LEVEL UP IS TOGETHER” and yelling “FIREBALL” whilst shooting a shotgun feel so superbly teenager and cheesy, it’s hard not to grin as Houser takes you along for this ride.

I do like the direction that Houser is taking this. Already she’s given this a good reason to exist, and that is to tell the story of Will’s transformation from naive teen to PTSD, shell-shocked survivor. It feels important and contributes to the overall Stranger Things universe, without just feeling like a side story or unimportant prologue. We see a lot of Will building confidence by working his way through the Upside Down, and gaining thing like a shotgun, yet there’s also a lot detracting from his mental state, such as seeing the vision of Eleven in the forest and being trapped by the Demogorgon in the final scene. There’s also a lot of old-school narration throughout, which I find actually works pretty well. Houser uses it sparingly so that it doesn’t become grating, rather feels becoming of the scene, feeling like a Vincent Price voice-over to a tense and timely horror flick. Lines like “IT’S BEEN YEARS SINCE WILL FEARED WHAT MIGHT BE LURKING UNDER HIS BED” are perfectly toned and worded to fit the aesthetic and tone of this series, and Houser milks it for all its worth.

Penciling is handled by Stefano Martino, who brings a nice cartoony realism to depicting the likeness of the series’ actors. There’s definitely a sense that Martino is trying to represent the actors on the page, but it doesn’t feel too clunky or faux-realistic. Martino depicts the character’s tired-eyed, shaky lipped mannerisms well in each scene, if sometimes a little too much in the first few scenes of him running from the Demogorgon. However, moments like when the narration notes that Will “REALLY SEES THROUGH THE STRANGENESS THAT SURROUNDS HIM”, Martino draws will with an eerie, unnerved facial expression that feels well-depicted and genuine. Similarly, the scene where Will gives up in his Will the Wise persona, we see a truly dismayed expression as he looks downward with sunken eyes and a slightly pouting lower lip. It’s good artistic work that emulates the actors and their characteristics well without going too far in aping realism.

Martino’s pencils are inked by Keith Champagne, who gives the world of the Upside Down a very ethereal and shaky, uncertain feel. The environments of this world are spattered with creeping, sickly looking ooze and vines that Champagne gives a very spidery and light feel, to the extent that although the fit with most of the background material, they still stand out as being otherworldly. Champagne’s character work is cleverly done, too, especially on the Demogorgon. Often we see this character depicted in the distance, stalking from afar, so Champagne cleverly casts him in shadow or has his gaping maw a little darker than usual. However, there’s a fantastic scene where the Demogorgon springs on Will, and we see him in full force. Champagne keeps his inks as feathery and thinly detailed as possible to thoroughly depict the horrible anatomy of this creature. The flesh of its mouth and spit flecks hanging from its copious teeth are unsightly and discomforting in the best possible way.

In a visually unique world like the Upside Down, colors are a big part of setting the tone, and Lauren Affe does a great job here. There’s always a strong distinction between when Will is in a flashback or a safe place, and when he’s in the Upside Down. Affe colors the Upside down with a great changing palette, filled with bright neon splashes of light from unknown origins and a soft, almost hazy yet ethereal glow shading the environment. Yet in any other setting, Affe gives the pages a very context relevant pastel palette, with lots of beiges, browns and olive greens. I love her papery form of shading and texture, however. It gives a distinct look that evokes old 80s newsprint, yet still looks contemporary and modern.

Jody Houser and her team of capable co-creators give a good reason for “Stranger Things” to exist as a comic. This issue explores a previously untapped segment of the first season of the show, expanding and giving further development to one of the main characters. Martino, Champagne, and Affe do a solid job at evoking the visual style of the show without directly trying to mimic the realism, instead choosing to blend it with a nice 80s comics aesthetic. I’m happy to say I’m excited to see more of Will Byers’s slow mental degradation and character descent.