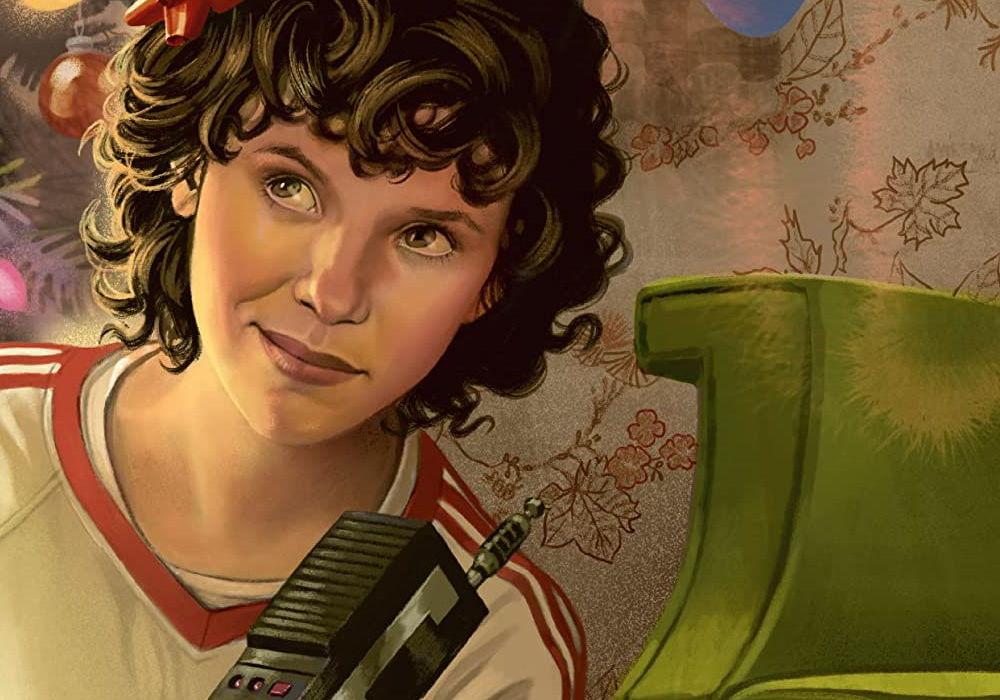 For many families, the last month of the year is chock full of holiday specials. Fun, light stories of the season that range from pithy romances, stop motion cartoons, or classic tales of redemption. If part of an established show, these specials tend to be stand-alone episodes, chances for the main characters to have a little bit of fun without disrupting the status quo. Similarly, many specials give the opportunity for the cast to teach someone about a tradition, whether established or something unique to that cast’s world. Rarely are they more than fun little stories of being together with people you care for, and there’s nothing wrong with that. In “Stranger Things Winter Special” #1, Chris Roberson creates a charming holiday special, not overly sweet, with some of the meta elements that make the show so memorable. 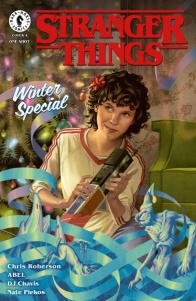 Cover by Steve Morris
Written by Chris Roberson
Illustrated by Abel
Colored by DJ Chavis
Lettered by Nate Piekos
The winter holidays are upon us and the kids of Hawkins are in full spirit. As they recall stories from their childhood to teach Eleven about Christmas, tensions run high when Dustin swears he saw something lurking in the forest outside.

“Stranger Things Winter Special” #1 is a relatively simple premise, the Party, along with Jonathan, Joyce, and Hopper are getting together for a little Christmas party, and because it’s Eleven’s first celebration, they are pulling out all of the stops. In many ways, it’s one of the classic setups of a holiday special, teaching about traditions and showing someone the magic of the season. Eleven gets a present, there’s a spread of cookies, and (most importantly to the boys) the chance for Eleven to be introduced to the most important part of December, the very Christmas specials that the issue is parodying (even if it’s a loving one.) Chris Roberson does an admirable job capturing the punchy dialogue of the show, The boys have their little arguments, Hopper is appropriately just morose enough, and Eleven is curious and delighted with each passing development of the holiday season. If this was the issue, it would be fine. There’s nothing out of the ordinary, but it’s good harmless holiday fun. But where the issue really sings is in the descriptions of beloved holiday specials and how the art captures the look and feel of the different specials the characters are trying to invoke.

Between the scenes of Eleven getting a crash course in a holiday celebration, the different cast members try and convince her to give their favorite holiday classics a shot, each giving a fairly clumsy explanation of the plots of the specials. From Santa Claus’ “superhero origin” (a send up of the stop motion Rankin Bass classics,) to the story of a monster who is ultimately accepted by the small people who love Christmas (How The Grinch Stole Christmas,) “Stranger Things Winter Special” #1 is full of these fractured Christmas tales. There are two things that really help make these misremembered stories really stand out. For one, the stories help to emphasize what these characters value in a story. Will is obsessed with origins, found families, and powerful heroes who save the day. Joyce emphasized redemption in her retelling of A Christmas Carol. Dustin’s is, arguably, the most tragic as he recounts A Charlie Brown Christmas as a creative boy distant from his friend and only finding solace with his dog. The issue takes place somewhere between seasons 2 and 3 of the show, and by the third season, Dustin feels distant from his friend group. Combine that with the fact that no one is taking his concern of a mysterious figure in the woods seriously, and you can sense that Dustin relates to the protagonist of his special. While these little vignettes are amusing to read, they really stand out for another reason, giving the chance for the art team to really have some fun.

While the art of the frame narrative of “Stranger Things Winter Special” #1 is fine, it’s the cast recounting different holiday specials that give Abel and D.C. Chavis a chance to shine. Each of the stories offers Abel a chance to play with varying styles of art and page layouts. As you read the issue, there are almost moments that feel like it’s one of the oversized issues that invite different artists and writers to come back and tackle a few pages of the story. To find out that one artist playing with different forms and making each feel distinct makes the issue feel special. It’s the little things, from the Seussian angles of the buildings in the Grinch segment, the overly round eyes of parodying Rankin-Bass, or the simplified faces and backgrounds of the Peanuts parody, each special feels distinct and inspired by the genre. Abel also accomplishes this in the page layout, which makes the art feel different by how the pages are structured. There are also fun little easter eggs, like Benny, the kind diner owner, filling the role of the Ghost of Christmas Present or Mike’s sister as Cindy Lou Who. While it’s not 100% clear, each segment feels like Eleven interpreting the stories using the only frame of reference she has, her friends. Some of the character designs aren’t perfect, Dustin, in particular, looks off in most panels, but in the stylized holiday special segments, they all feel pitch-perfect.

Finally, it wouldn’t be Stranger Things without a little bit of mystery. Throughout “Stranger Things Winter Special” #1, Dustin insists on seeing a monster in the woods, and while his friends initially shrug off the suggestion, they venture into the woods to do what they do best, save the world. While the monster ends up being a rabbit caught in the trap, and they don’t hold the world, it does give Eleven a chance to save a creature that she relied on to survive before Hopper found her and took her in. In addition, there is a small moment of camaraderie between Eleven and Will as they both reminisce on the rough winter they had the year before. It’s good that there isn’t a monster in the woods, giving this holiday special the stand-alone nature of other episodes of its ilk. It allows Eleven to heal and grow a chance to see the true meaning of the season, helping others. Is this issue required reading to understand the world of Stranger Things? No. Holiday specials rarely are. But is it a chance to spend some time with characters we care about enjoying their found family, and in many ways, that’s what makes it a great issue and pitch-perfect holiday special.

Final Verdict: 8.5 “Stranger Things Winter Special” #1 is a light, fun homage to holiday specials, featuring fun character moments and art shifts that feel inspired by the specials they are parodying.