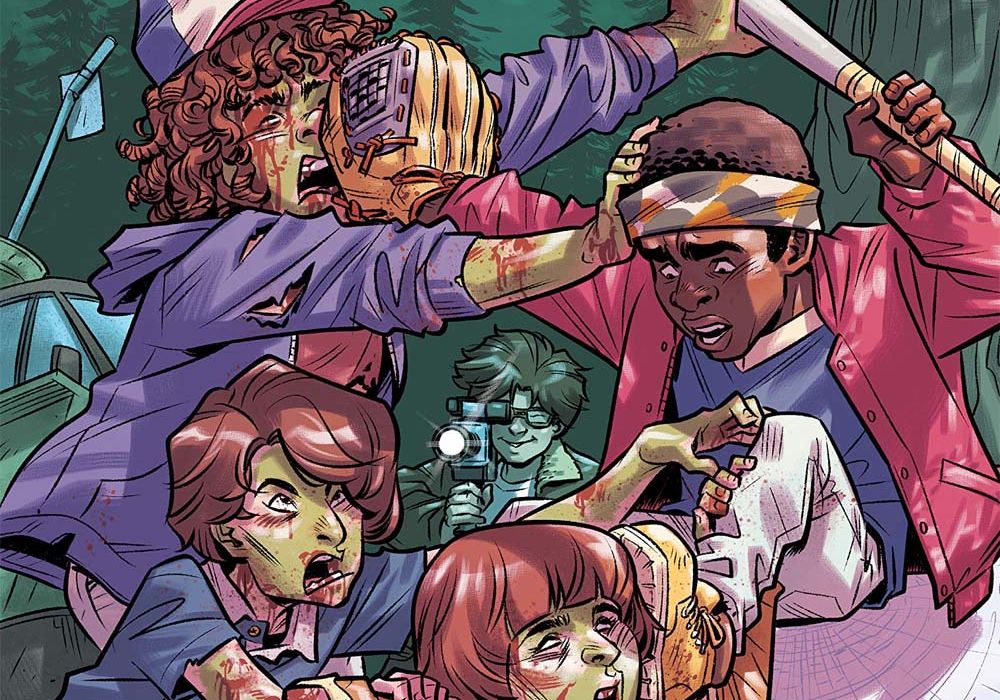 One of the strange parts of the Stranger Things phenomenon is that it is a show about children, but not aimed at them, and as a result is a much more intense adventure series than you’d expect — the entire show is arguably a tribute to the kids who’d disobey their parents, and stay up late to watch scary movies they’d been forbidden from seeing. Dark Horse’s first original graphic novel in the series is clearly intended for a younger audience, but does this mean it loses any of its bite? 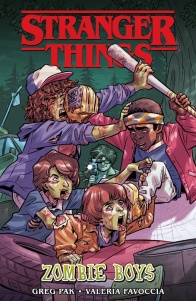 It’s spring in the normally quiet town of Hawkins, Indiana. Mike, Lucas, Dustin, and Will are still grappling with the traumatic encounters with the Demogorgon and the Upside Down in season one of the hit Netflix series. As tensions rise and fractures begin to form in the group, a new kid shows up to AV club with a Betamax Camcorder and a vision. The new Spielberg wannabe friend, Joey Kim, wants to make a zombie horror movie based on Will’s drawings, and in the process they come to terms with the real horrors they’ve already faced.

Despite skewing younger than the show and previous tie-in comics/novels, this still feels like a true Stranger Things story: Pak uses the light-hearted, inconsequential conceit of the boys making a zombie movie to explore how they coped with the aftermath of the first season, and to tell a story about how filmmaking (or other forms of art) can offer a cathartic way to process major events in our lives.

Will Byers’s trauma from being taken into the Upside Down during the first season gets a lot of attention; it’s a pleasant surprise that his struggle to cope with his near-death experience does resurface after it’s initially dealt with here, further foreshadowing what happens in season 2, but also reminding the reader that the road to recovery is always a long, difficult one, and that it’s nothing to be ashamed about.

Mike missing El also gets a look-in, helping avoid one of the issues of telling a story that excludes Nancy and the other older kids between season 1 and 2: namely, because of El’s disappearance, and the fact Max hasn’t been introduced yet, there aren’t a lot of female characters. Pak mainly overcomes that by giving Will’s mom Joyce a large presence, where she continues to worry about her son’s mental state, and checks in with Dr. Owens, who reassures her — and the reader — that Will’s zombie sketches are perfectly normal (if violent) fantasies.

Dustin’s mom, Claudia, also gets her own storyline, which is an unexpected delight given how small her role on the show is: she’s worried about her son’s grades, which adds a nice dash of anxiety to the unflappable hero for once. Lucas gets a lot of one-on-one time with the new kid, Joey Kim, who — as indicated by his last name — is Korean: it’s great seeing some more ethnic diversity in Hawkins, and for Lucas to have someone else who understands what it’s like for everyone else to assume you’d be that one person of color from a movie (even if he has to hilariously remind Joey that he does not want to be killed off, like every other Black person in a horror film.)

There’s a lot of metahumor here, from the recurring debate over whether Night of the Living Dead — the original zombie movie — contributed to the problem of Black guys always being the first to go in horror films; to Will angering his friends by trying to inject some comedy into their project. That scene coincidentally reflects the divide over the campier, more over-the-top tone of season 3 (itself a reflection of how blockbusters shifted in mood from the ’70s to ’80s, ie. the contrast between Jaws and Indiana Jones and the Temple of Doom), and subtly makes the argument that humor is a perfectly valid approach to dark subjects, even while emphasizing Will is shying away from being open with his friends.

Pak’s grasp on the characters’ voices is great: there’s never a moment where you’ll think, “they’d never say that.” Likewise, Valeria Favoccia and Dan Jackson’s art is a fantastic emulation of the show: it’s never slavishly realistic, but the clean lines and strong colors always feel like gentle reminders of the cast, when the creative team could’ve gone for a more caricatured approach à la the cover — if you’ve ever wondered what a “Stranger Things” book by Terry and Rachel Dodson would look like, this is the answer you’re looking for.

Overall, “Zombie Boys” is a short but sweet read, one perfectly suited for both devout Stranger Things fans, and those only vaguely aware of the premise, with lots of great messages for younger readers (and reminders for older ones) about the therapeutic power of art. It may not be canon (don’t expect any insight into where Joey Kim is during season 2), but it’s a fun, fine addition that perfectly captures the nostalgic charm of the series nevertheless.