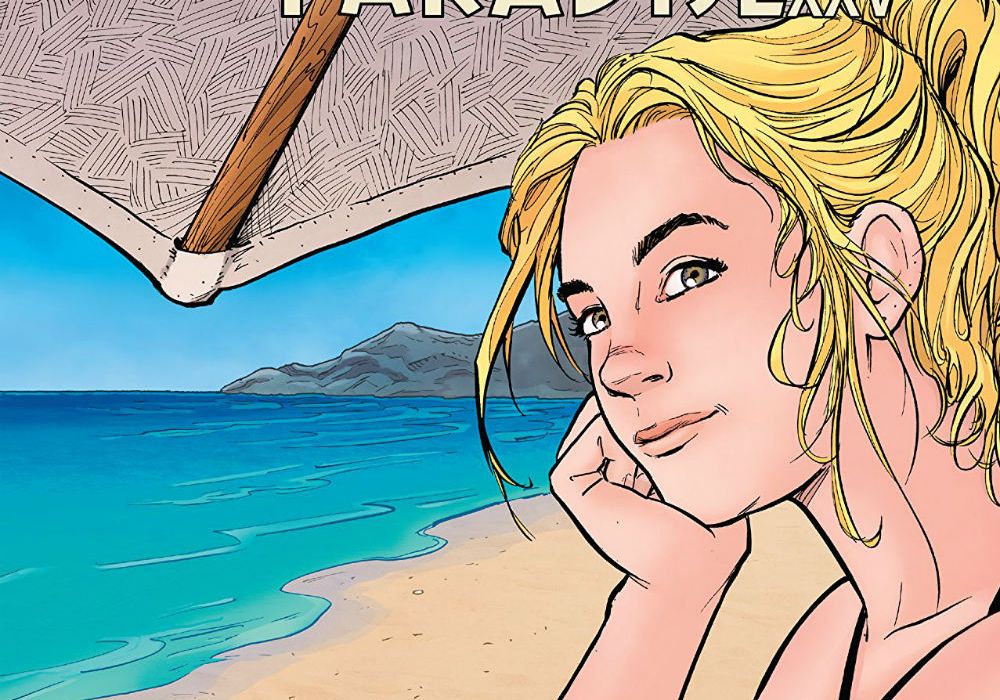 Murphy’s law might not be referenced directly but it sure as hell is present as Katchoo’s globetrotting adventure/hunt continues. Will she get home to her wife? Who can she trust? And what will Francine do to her the next time she can get her on the phone? Sources say, the outcome looks grim. Spoilers ahead. 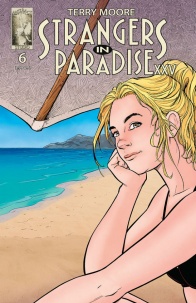 Katchoo follows the trail of Stephanie, the rogue Parker Girl, to the steamy jungles of Columbia. Meanwhile, Francine gets a surprise visitor, Freddie!

“Strangers in Paradise” has never been a very quiet or a very fast series. It’s built around conversations and the slow tension of real life, with all its messiness and problems, with all its twists and turns and deviations. It has its less than everyday elements, such as the Parker Girls and the fallout surrounding them, but the central relationship and driving force of the series was that of Katchoo and Francine and, to a lesser extent, David. So far, “Strangers in Paradise XXV” has kept Katchoo and Francine separated, which provides its own form of interest and tension, but also harms the overall quality of the narrative.

Part of this is because of the choices Moore makes in how best to convey the thoughts and feelings of Katchoo. She’s the focal character, more so than Francine, and so has a significantly larger number of pages dedicated to her escapades. However, because she’s alone or jumping from place to place, her thoughts are born out through narrative captions instead of conversations, which, due to Katchoo’s personality, can be overwhelming. This is the intended effect too.

Katchoo is nervous. Nervous because of her family. Nervous because she doesn’t trust Stephanie but she also doesn’t trust Tambi anymore. Nervous because she knows it could all come crashing down around her and it would feel like it was all her fault. The opening monologue on page 1 contains all this information and more. It’s the perfect way to open the issue and shows off one of Moore’s strongest talents, utilizing a splash page not to speed a narrative up but to slow it down.

The page is serene, with two interlocked trees and numerous narrative captions. When placed together the trees can be read as symbolic of Francine and Katchoo; their lives beginning separately but entangling later on, only a little at first; then more and more until the two were deeply and truly tied together where the leaves bloom and their branches touch the infinite future. Moore draws the eye with each subsequent caption, forcing us to linger upon the trees and letting the moment and the weight of the words settle in. It’s in the next few pages that the narration becomes too much.

Much of those pages could be told silently or with significantly fewer words. The content of the captions are already know or can be inferred so much of it is a retread instead of fresh revelations. It’s not out of place, as other expository recaps could be, as it is told cleverly through Katchoo’s internal voice but there’s so much of it and so little else happens that it seems like the narrative is only moving forwards in fits and starts, taking a step back before ever trying to advance. By the end of the issue, we’ve gained a lot of new information and recontextualized Stephanie once again but did that require an entire issue? Could this have been told in a more expedient manner and not lost some of the soul of the characters or the story? I’m not sure.

As is though, it harms the issue to spend so much time with Katchoo’s repetitious thoughts and not much else. What saves “Strangers in Paradise XXV” #6, aside from Moore’s constantly fantastic draftsmanship, are the scenes we get to spend with Francine and the visual humor of Katchoo’s back-half rant. The lettering and sheer volume of text works for this section to express her rage and fury, allowing the action to take on a humorous quality while also remaining tense. On the other side of things, the scenes with Francine, Ashley and Koo are tender as well as funny. Moore peppers these pages with visual gags and watching Ashley and Koo bounce around the page compared with Francine’s slower motions shows just how much she’s changed since “Strangers in Paradise.” She’s still Francine but no longer the insecure, unsure Francine of old. Even if she were, the one she could share that with is off hunting down a math equation that will almost certainly get her killed.

Moreover, while we don’t get much in the way of Francine’s thoughts about Kachoo at the moment, we see the home life that Katchoo is missing. We see the things she wants to protect but this isn’t just Kachoo’s story, it’s Francine’s too. As such, her mother is an important part Parallel stories are being told that, come the resolution of Katchoo’s global hunt, will bear fruit for the future of the series.

Very little transpired in issue #6 and yet much occured. That is the nature of “Strangers in Paradise XXV;” a narrative told through the whims of its protagonists and their messy, difficult lives, thrust into situations they don’t want to be in, fighting the inevitable and hoping beyond hope that all will be well. It’s a stubborn hope but isn’t it always.

Final Score: 6.8 – Moore’s draftsmanship is obscured by heavy amounts of narration that take away more than they add. A weaker issue but even the weakest of Moore’s work holds greatness.