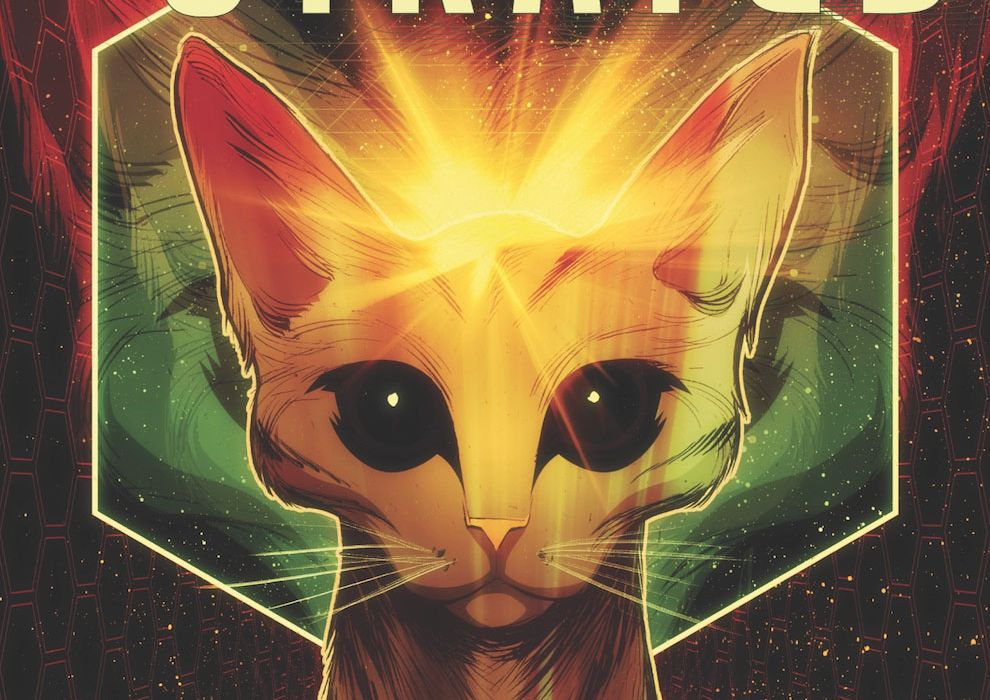 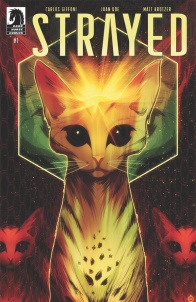 In the far future, a military-industrial complex reigns over all humanity and actively destroys distant alien worlds. The galaxy’s only hope can be found through an unlikely pair: an astral-projecting cat named Lou and his loving owner Kiara. Trading nine lives for the well-being of billions, their revolt is a battle for love, friendship, compassion, and the soul of humanity.

Throughout history, across cultures, and around the world, humans have maintained a special relationship with cats. Whether they’re reputed to be harbingers of good fortune, malevolent tricksters who bring bad luck, or aloof demi-gods with untold supernatural powers, cats continue to fire our collective imagination and feature prominently in some of our most epic tales. There’s also considerable overlap between people who love to read comics and people who love cats, a fact that’s clearly not lost on first time comic book writer Carlos Giffoni, illustrator Juan Doe (who does both inks and colors), and letterer Matt Krotzer.

Needless to say, Juan Doe’s amazing cover sold me in a heartbeat. I’ve consistently loved his profoundly eerie covers for “Descendent,” as well as his work on “Dark Ark” – despite the fact that I never quite connected with that book’s story. In any case, one look at the majestic, sphinx-like cat on the cover with it’s intensely unflinching, impenetrable black eyes and I was hooked. Pondering that image, I immediately began to grapple with a series of big, provocative questions. I simply had to know more.

Thankfully – though it’s definitely not always the case – Doe’s artistic style continues throughout the book. If anything, in fact, it gets better, especially on the many splash pages and two-page spreads. The designs are impeccable, stopping you in your tracks, demanding that you linger to pore over subtle details and graphic flourishes. Honestly, I feel like I’ve just experienced hexagons in a whole new way. I’m not quite sure what they mean, but damn, they look super dope.

In terms of the actual story, a brief introductory note on the title page starts to answer some of our burning questions, efficiently laying out the book’s high concept premise while wisely avoiding the need for an unwieldy info dump or clunky exposition. Instead, Doe and Krotzer’s stunning artwork are allowed to take center stage, expertly framing the story while establishing a visual grammar that runs throughout the first issue. With incredible linework that mixes two distinctly contrasting styles – loose and expressive on one hand, geometric and bold on the other – Doe simultaneously sets the emotional tone and subtly previews the story. In three hexagonal panels that visually flash forward into the narrative yet to come, Doe juxtaposes anguish, love, and the almost incomprehensible power one creature wields.

Similarly, the colors in this opening spread – which were unequivocally and gorgeously established on the front cover – are equal parts lush and intense. With a mixture of fiery reds and molten oranges, accented by a ghostly, translucent high tech green, Doe creates a distinct futuristic palette that manages to evoke both a classic sci-fi look and something altogether different, strange and unsettling – colors that are felt as much as seen – conjuring sensations of a universe that hangs precariously in the balance.

It’s hard to overstate how well all three creators work in concert together. In many ways, Doe does the heavy lifting, setting the mood and tempo, but Krotzer’s work is equally effective and wonderfully integrated into a cohesive whole. With a great mixture of fonts, subtle background colors, and other graphic details, Krotzer’s visual cues are intuitive and easy to follow. His lettering stands out and helps to dictates the pace, yet never detracts from Doe’s illustrations or calls to much attention to itself.

With highly captivating, well crafted art throughout, Giffoni is able to focus on what really matters, the deep and profound relationship between the military scientist Kiara Rodriguez and her cat Lou, two sentient beings who are trapped in a secret military-industrial base floating somewhere in space. Naturally, failure isn’t an option. As Kiara’s captor reminds her on the first page, if she and Lou can’t complete the tasks they’ve been assigned, both will be classified as “disposable.” “Over my dead body,” says Kiara. “The order in which you die doesn’t matter to me,” says her unseen captor, callously.

Clearly, Kiara and Lou only have each other. No one else can save them. Ironically, as the book progresses, their successes prove to be even worse than failure. Her boss Major Williams tells her that her service has not gone unnoticed, dangling a “significant payout,” even as he tells her there’s more work to done – more conquest and colonization, more creatures on other planets that “will be given a new and more meaningful purpose” as their planets are plundered for precious resources.

Yes, there are definitely some weighty themes and big ideas at play here, but so far Giffoni’s script is less concerned with details, worldbuilding, and mechanics than it is with the emotional component and human impact, even when a key protagonist isn’t technically human. In fact, as the story evolves, it seems very likely that this may actually be Lou’s story more than anyone else’s. There’s undoubtedly an intense, richly layered story hiding behind those intense, mysterious eyes.