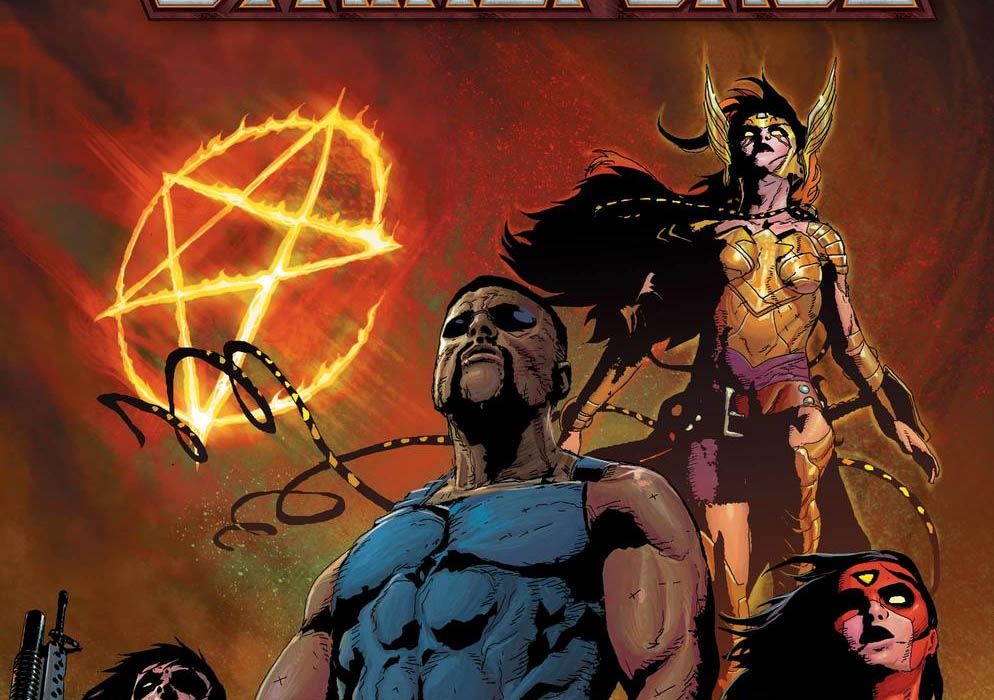 “Strikeforce” #1 has an interesting premise behind the core series. A group of Marvel heroes selected seemingly at random band together to fight a new threat to the Marvel Universe. The title assembles an interesting roster of talent with newer Marvel writer Tini Howard teaming up with the underappreciated artist German Peralta. Veteran comics colorist Jordie Bellaire adds her palette to the title. The most interesting aspect of “Strikeforce” is how Marvel is expanding a seedy underbelly of magic users. The title even falls out of the traditional camp of including obvious magic-user Stephen Strange. The book is even devoted to bringing Spider-Woman back into the limelight in her original outfit. “Strikeforce” #1 has several fascinating, disparate elements of but does the script and art bring all the pieces together in a satisfying manner? 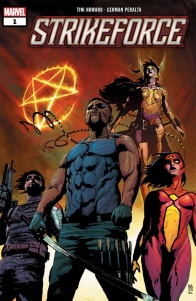 NO COMPROMISE. NO MERCY. ALL NEW, ONGOING SERIES! From the dark minds of rising stars Tini Howard and Germán Peralta comes a tale of the underside of the Marvel Universe! A new threat is secretly taking over the planet — and the more people who know about it, the more powerful the threat becomes. Blade dealt with this threat once before, and hoped to never have to again. He can’t bring the Avengers in on this — not just for their own safety, but for the safety of everyone on Earth. So he must recruit a team of heroes accustomed to darkness — a strikeforce. Blade, Angela, Spider-Woman, Wiccan, the Winter Soldier, Monica Rambeau and Daimon Hellstrom join forces to fight the fights that no other Marvel team can take on!

“Strikeforce” #1 introduces the threat of the Vridai these creatures are interesting, but don’t capture my imagination right from the jump. The concept of the aliens being shapeshifters contributes to some of the most unexpected aspects of the issue. It is also fascinating to see how the story ties in so heavily to previously established Marvel continuity. Howard has to reach in order to make this team of heroes band together so quickly. Without having a strong enough core distinctive reason to bring the base team of heroes together, the issue can come off a little forced. Howard struggles to find a voice for some of the cast members as well.

Pairing Blade with the team changes the narrative, as Howard centers the core of the plot around his familiarity with the new aliens. It feels like the rest of the cast members are trying to keep up with Blade, who already has the book figured out. Howard’s Blade carries a feeling like he’s one step ahead of the other heroes which gives the issue an interesting dynamic. He brings the heroes together and explains most of the dialogue through quick captions. Getting a more focused leader and a solid antagonist right from the beginning of the issue gave the story a more focused feel than other recent Marvel debuts. Despite the fact that this story can get wild and off-the-wall, there’s a grounded approach to “Strikeforce” from both the art and the writing.

Howard’s inclusion of Asgardian aspects from Angela also brought something interesting out of the story. I hope she will continue to explore various Marvel connections to the team that feel authentic with this story. The title leaves a character like Bucky Barnes feeling like he was included for aesthetics rather than story purposes. I hope future issues will be able to explore more about the full cast of characters on this large team. The issue does a great job including a lot of content and ideas while still feeling grounded. There are so many Avengers characters mixed with elements from “War of the Realms.”

German Peralta lends a noir-influenced art direction to the series that catches the tone incredibly well. Peralta’s art functions best in the action scenes for the issue that tend to depict a wider range of motion. Peralta sometimes draws characters who are standing around, not depicting any sort of secondary activity. There are pages that have interesting poses like the scene in Avengers Mountain. This moment captures some of the height and visual differences from the heroes surprisingly well. The ribbons from Angela’s costume are ominously floating in the air while Bucky is raising his hands out of boredom. Even Jessica Drew is sulking to the side juding the rest of the characters. The panels where Peralta explores the premise and nature of “Strikeforce” are among the best moments in the series.

Bellaire’s dark, hellish color palette lends a level of authenticity to an Avengers team book focused on the occult. It is striking to see how characters with completely different costumes can blend together so seamlessly. Angela’s giant armor set looks natural next to Blade’s body armor and Spider-Woman’s traditional red outfit. Even though “Strikeforce” rushed to get an interesting cast of characters together, the tone for the issue feels just right. The story seems to capture a sense of ambition and direction with the new villains. “Strikeforce” #1 is uneven but could be onto something special in future installments.

Final Verdict: 6.8 – “Strikeforce” #1 rushes to get a different kind of street-level Marvel team together by end of the debut.