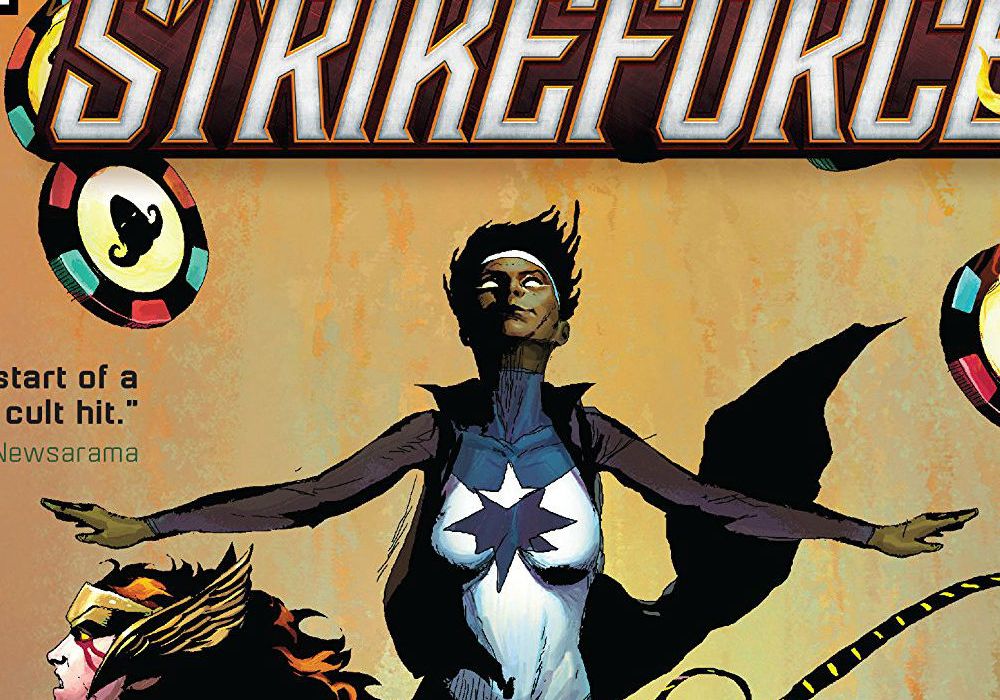 The nightlife in Las Vegas just can’t be beat. It really is a non-stop party and the possibilities are endless. You can go clubbing or take in a mystifying magic show, if you prefer. Maybe you want to make a beeline straight for the casinos you’ve heard so much about? Well that’s no problem at all, Mr. High Roller. You can hit up the slot machines, blackjack tables, fight a horde of evil shape-shifters… 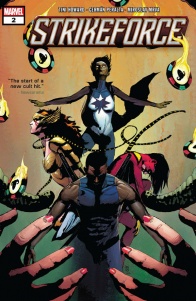 Written by Tini Howard
Illustrated by Germán Peralta
Lettered by VC’s Joe Sabino
Colored by Miroslav Mrva
THE DEVIL’S CHILDREN IN THE CITY OF SIN! Something is very wrong with Daimon Hellstrom. And that’s saying something for the son of Satan. The only one who might be able to help is Daimon’s sister, Satana — but she’s no angel. Demons, debauchery and decapitation abound as Asgard’s X-Force takes on Las Vegas!

Okay, maybe that last activity isn’t for you. Truth be told, it might not be a fun activity for all the heroes gathered in “Strikeforce” #2 either, but they don’t really have a choice in the matter. It’s poison for people to even know about these evil shape-shifters, the Vridai, so they have to step up and work together. That last bit does make for an interesting premise. Heroes being drafted unwillingly, forced to work with other heroes. It’s like the good guys version of the Suicide Squad.

However, I wasn’t exactly in love with Strikeforce’s mission this issue. For one thing, it forces them to deal with some of Marvel’s demonic characters. Now, I’ll admit there’s probably some personal bias here but I don’t find Daimon Hellstrom or his sister Satana all that interesting. They are fine in small doses but when the focus is on them, it’s just draining. Satana might as well be one of the team in this issue, for better or worse. Having a demonic casino is an interesting concept but she doesn’t have much personality beyond ‘flirty demon’. She just felt in the way.

The villains aren’t that great either. Last issue, Count Ophidian, the Vridai’s leader didn’t leave much of an impression. The Vridai as a whole aren’t terribly interesting outside of that ‘knowledge is poison’ wrinkle. Without that, they’re just shape-shifters. The whole chasing a shape-shifter trope feels kind of tired by now. The Vridai could be anyone of us! Oh my goodness, how will we tell which Satana is the real Satana? You get what I’m saying.

Also, even though it’s bordering on meta, you kind of expect the heroes to be more trope-savvy by now. Going up against shape-shifters, why don’t they all come up with a code-word or slash their sleeves so they can tell who’s real? Another note, they can’t find some way to circumvent this? Monica can’t mark her teammates with a harmless, light dose of radiation? Wiccan can’t perform a spell? Blade’s been at this since the ’70s, he doesn’t know of any hidden artifacts that could help them out? It would save them a lot of time, I’m just saying.

While I can appreciate the interesting and intentionally cheesy design of a casino from hell, I can’t claim that I loved the artwork all that much. This just comes down to a matter of personal preference. I can’t say that Germán Peralta’s work is bad but I know it’s not for me. I can’t even exactly pinpoint what I don’t care for…I guess I like my superhero action a lot more detailed. That’s my best guess. Comic books are a visual medium and this colored my reading experience but you might love the art. Different strokes for different folks.

The best part of the issue is without a doubt Strikeforce’s members and their interactions with one another. The writer, Tini Howard, picked some pretty interesting characters to team up and has a good handle on all of their characterizations. I’m not terribly attached to Angela or Spider-Woman but both were likable and had their humorous moments this issue. True to form, Bucky does not feel like sharing his feelings or discussing his apparent Winter Soldier trauma. The guy also doesn’t hesitate to shoot first and ask questions later.

Blade is always ‘on-mission’ without fail. He’s not one for cracking jokes or even pleasantries. He’s always intense and more knowledgeable of the occult than others. It’s cool to see him leading a team. Then there’s Wiccan, who will always have a special place in my heart. The first time I bought comics, one of the issues was “Young Avengers” #2. It’s always good to see Billy and his fiance Hulkling. Here he’s still lovably awkward. It’s funny how the other teammates treat him like a kid even though he’s the most powerful among them hands-down. Tini Howard also gets automatic brownie points from me for including the amazing Monica Rambeau. I adore this often under-utilized and underappreciated character and in this issue we get another great showcase of her amazing power set. I eat stuff like that up. With more focus on these great characters and the promise of Doctor Doom looming in coming issues, “Strikeforce” should have nowhere to go but up.

Final Verdict: 6.5 – What happens in Vegas, stays in Vegas…we hope.