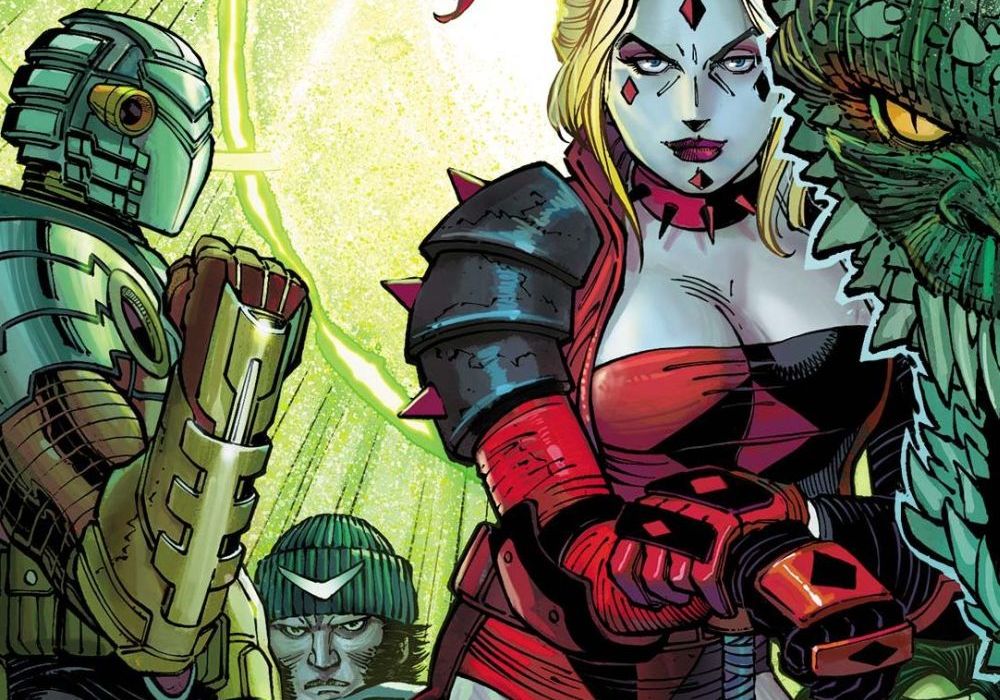 Ahh, that sweet, post-crossover afterglow. The perfect chance to hop on or off a title. So while the Suicide Squad catches their breath after a spirited throwdown with the Justice League, let’s have a look at whether now’s a good time to sneak off into the night or to roll over for another go with Floyd, Harley and the gang. 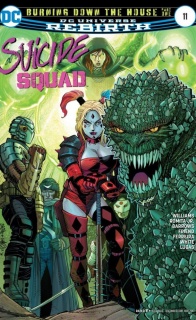 ‘BURNING DOWN THE HOUSE’ part one! Spinning directly out of the events of JUSTICE LEAGUE VS. SUICIDE SQUAD! Hidden somewhere deep within, the world is a burning flame. Its light is blinding. Its heat is deadly. It’s a fire fueled by hatred, by rage and by vengeance. Used, abused and left for dead, the greatest foe the Suicide Squad has ever faced returns, more powerful than ever, to burn down the world Amanda Waller has given everything to protect. RATED T+

Full disclosure, save that righteous mess they called a movie, I haven’t caught up with Task Force X since Ales Kot’s fantastic, but highly truncated, run in 2013 – okay, “run” is being a little generous; it was only 4 issues, but seriously, track them down. This is a much different beast.

Let’s start off with a little table-setting: it’s quickly established that Amanda Waller has been relegated to the sidelines; Williams lets several characters explicitly reference the Maxwell Lord/Justice League affair. It’s succinct, and as good an explanation as any. It also comes up naturally enough through character interactions that it never really feels expository; it’s just the new status quo. So if you’re only now picking up this title – or missed out on “Justice League vs. Suicide Squad” – you won’t feel left out, even though this party started hours ago.

Besides, as Harley says in a classic John Romita Jr. splash of the squad free-falling into battle – well, modern Romita Jr. classic – it’s just “…bad guy[s] covertly working for the good guys, taking out other bad guys because of the brain bombs the good guys illegally and immorally put in our brains.” That’s all the explanation this book has ever needed.

It’s nice to read Williams turning a clever phrase or two, because unfortunately, there’s not a lot more going on beneath that. The issue tries to set up the new handler, Harcourt, as an even bigger hardass than Waller ever was. But two pages after Flag mentions this out loud, she’s kindly granting his request of shore leave for the dirty half-dozen. Now this might just be some long game starting to play out, but right now, her actions don’t really seem to jive with what people are saying about her.

On the other hand, that shore leave is essential to the book’s back nine. Romita Jr. handles the Squad’s dirty work as they complete a mission, while Eddy Barrows deals with the individual members late-night revelry in the backup (though, I say ‘backup’ loosely, since both parts are pretty well equal length). There’s a nice contrast between the regimented panels and blocky figure work of Romita Jr. and Barrow’s fluid character designs and more explorative paneling. Stylistically, the art change helps mirror the military precision and rigidity imposed on the group versus the loose, unstructured quality that a night’s freedom provides them.

Romita Jr. draws the action with a steady hand: his clear framing and metronomic pacing take what could have been a chaotic free-for-all, and instead renders it cleanly with space enough to give most team members a defining moment in the fray. When Captain Boomerang flings his namesake weapon at a retreating guard, it’s spread over 6 equal sized panels. It works to lengthen the chase and ratchet the tension, while still building towards the overall crescendo of the mission objective. But despite that clarity in visual storytelling, there really aren’t any single images that really stand out.

Barrows art is a strange brew of moody background washes (seen both through windows and in the reflections on those windowpanes) and more photorealistic facial work that tries to cast the team in a much more personal light. From a rather intimate debriefing between two characters in a diner to a father connecting with his daughter, there’s a focus on the little tics people use to hide inner turmoil – all while storms rage on against the night sky behind them. It’s a little on the nose, yes; but nonetheless, it works as an effective visual metaphor. Floyd standing next to a window as lightning crashes down on derelict section of New Orleans is strikingly evocative. But for some reason, there are one too many faces that look unfortunately like they wandered off to the far side of the uncanny valley.

Structurally, I do appreciate how the second half opens up threads from the first and gives time for character beats that would have felt too forced if they’d happened in battle. It really makes Williams writing feel like one story told in two parts, rather than one issue telling two stories. And I’m huge fan of Barrow’s shadow and fog billowing over the final pages. It washes them with a sleazy Louisiana noir and makes for a fantastically moody execution of William’s cliffhanger.

But there’s not much else memorable besides that final image. Sure there’s a fight in the first half – but this is comics, so when isn’t there – and somewhere along the way the big bad releases a flood of generic orange jumpsuits from Blackgate prison. But we learn nothing about him, and what we do learn about the squad is that they’re stressed, burned out. And unfortunately, there’s no real reason to care that any of these people might deserve a night off. There’s a brief moment during Harley and Flag’s conversation in the diner where she slouches towards insight and hints at some character growth, but it’s squashed all too soon with giant mallets and Joker talk.

Final Verdict: 6.0 – Overall, it’s not bad; it’s just bland. So don’t sneak off; just say, “Thanks for a lovely evening,” and go off into that good night.