The fact that, since the show started last fall on CBS, Supergirl has not had a regular series at DC is one of the more puzzling decisions that their editorial staff has made over the past few years. The show, a success despite moving networks, has revitalized interest in the character, and set her apart as more than just ‘Superman’s cousin.’ So, the character being a part of ‘Rebirth’ was a close to a no-brainer as you get tody in comics. And luckily, DC’s chosen creative team of Steve Orlando and Emanuela Lupacchino manages to introduce the Girl of Steel in an issue that attempts, and succeeds, to cover a lot of ground. Keep reading for our spoiler-free discussion of the issue. 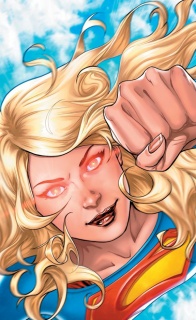 Supergirl turns to the shadowy organization known as the D.E.O. (Department of Extranormal Operations) to restore her lost powers once and for all! But as a fateful experiment sends Kara Zor-El rocketing toward the sun, disaster strikes at home in the form of the lost Kryptonian werewolf Lar-On! All the epic action of the brand new Supergirl series starts here!

The challenge with this comic – which really, isn’t all that different from the challenges other #1s feature – is that there are going to be a lot of people buying this comic with grossly different expectations for what a Supergirl book should be. You’ve got fans of the character’s New 52 version, for whom this book needs to tie into what the character has been for the past five years. You’ve got old school DC fans, turned off by the New 52, who want to believe that ‘Rebirth’ can really deliver the hopefulness promised by the character. You’ve got people who watched the CBS series, and who want to see “their” Kara Danvers on the page. And then you’ve got people who just know the character from her years of pop culture references, who are looking for a good story.

I’ll get to how each of those groups will feel in a bit, but first, some attention must be paid to the work of Emanuela Lupacchino. I stole this from one of my DC3cast brethren, but Lupacchino seems poised to do an event comic one day, because her mix of bombast and attention to detail is just a match made in heaven for some heavy-hitter action. Her Kara is a revelation; she’s every bit as beautiful as we’ve seen from artists in the past, but she also appears like she’s ready to stomp your ass at a second’s notice. There is something about how Lupacchino draws her in flight/action that reveals both grace and power that so many artists have missed. Many times, she’s depicted as dainty when in action – not here.

Lupacchino also doesn’t fall into the habit of trying to match every character to their TV counterpart. Sure, we meet the Danvers family here, but they aren’t a carbon copy of Helen Slater and Dean Cain, unlike so many Marvel books, for instance, who made Tony Stark into Robert Downey Jr, almost to the point of caricature. She especially doesn’t try too hard to make Kara into Melissa Benoist, and that would be a very real temptation here. Instead, Kara looks like Kara, the character from the New 52, as she should.

For the fans of that New 52 iteration – don’t fret. There is a lot of carryover here from the prior “Supergirl” series. Picking this book up felt, in many ways, like the start of a new arc on the past series, with a new creative team and vision picking up where the last run left off. That said, this feels far more ‘human’ than the last time we saw Supergirl. I can’t see that really being an issue for fans of the book, however; I don’t think that was what people liked about the old series. Kara many times seemed cold and distant, but there’s none of that here. Sure, she’s still a fish out of water, but she’s not bitter about it. Lupacchino also has clearly studied the New 52 run, as a lot of her visuals are similar to what we’ve seen recently. This, visually, appears to be the same world, just a little more lived in.

For fans of the pre-“Flashpoint” Supergirl – well, I guess it depends which pre-“Flashpoint” iteration we’re talking about. Kara is a Danvers again – though not Linda – and she retains the trick of being blonde as Supergirl and a brunette while in her secret identity, which is a fun element. I think, more than anything, classic Supergirl fans respond to the same things that fans of the television show do – the hope, the positivity, the joy that she can exude. That happens here. Sadly, if you’re a big fan of the ‘Matrix’ Supergirl, you’re sort of out of luck. Sorry!

Anyway, the biggest inspiration here is clearly the tone of the television series. And while Kara is not quite as fully human as she is there, steps are being taken to giving her a grounding in humanity. She’s going to be rooted in National City with the Danvers family, going to high school (she’s actually a girl, unlike the 20-something Kara on Supergir), and I wouldn’t be shocked if we see some of the show’s supporting cast pop up in a bit as well.

All of this weaves together extraordinarily well, and all of that is thanks to Steve Orlando’s writing. His Kara is fun and determined, impatient and headstrong. Nothing that she does feels out of character, but she’s also unpredictable in a way that her cousin never is. Orlando is one of the best at nailing a character’s tone, while adding in his own touches. He isn’t Rick Remender, giving each character he touches a set of daddy issues that seem ripped from his own life. Orlando is more of a chameleon that way, allowing the character to dictate how he approaches them, as opposed to overlaying his preferences on top of a character that it may not exactly fit with.

That said, there is a quasi-Kryptonian werewolf which, having met Steve a few times, seems to be something right up his alley. I love the choices he makes with the battle between Kara and the Kryptonian – again, she is powerful, but also supremely compassionate towards the creature. This shows her heart and her fist are working together, and isn’t that exactly the Supergirl we want?

The issue isn’t perfect, though – at times, the seams show a little, of trying to stitch together so many disparate versions into one quilt, but that’s expected from this issue. Much like “The Flash: Rebirth,” (and, again, a hat tip to the DC3cast bros – you’ll hear us discuss this on Episode 31 on Wednesday) this issue is overflowing with potential, but is slightly reined in by the need to fill everyone in on so many details.

As the book goes on, I can’t see those seams start to dissolve, and Orlando and Lupacchino (along with Brian Ching, the other artist on the title) using all of the ingredients of the past to tell new stories that won’t need to constantly be referential to other sources, or catch up an audience that may be lagging behind. Once the gears really start turning, this book is going to take off faster than a speeding bullet. The fact that it stalls a little out of the gate here is nothing to worry too much about.

Final Verdict: 7.2 – A strong start to one of the most anticipated comics of the season.