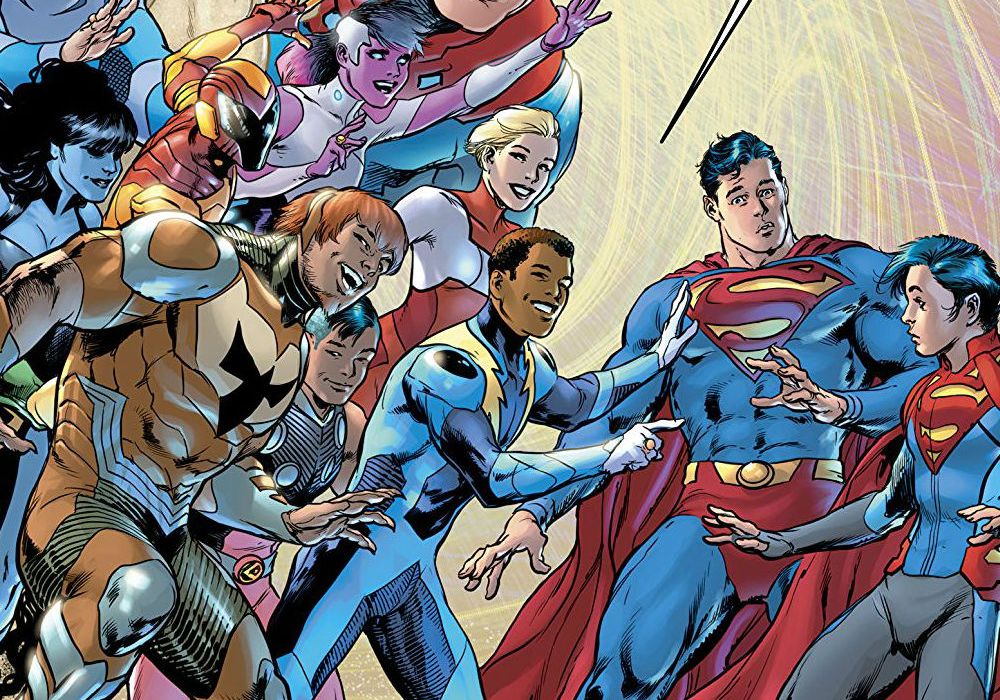 Faster than a speeding bullet! More powerful than a locomotive! Able to leap tall buildings in a single bound! Superman is undeniably one of the most iconic characters of all time. His name is practically synonymous with superhero. Both his influence and importance in comics cannot be denied. Here’s the thing though…sometimes Superman comics are boring. I mean, really boring. Maybe it’s because Superman’s practically perfect and doesn’t have a dark side. Maybe it’s because he’s so powerful that most fights are a joke. Maybe it’s because once you get past the Lex Luthors and Brainiacs, his rogues gallery needs some work. I mean, you can’t tell me you’re dying to see him go up against Toyman again. Fortunately, Big Blue’s pretty interesting under Bendis’s pen. 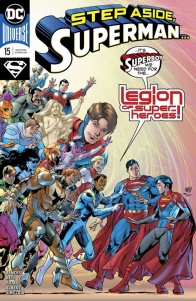 Written by Brian Michael Bendis
Illustrated by Ivan Reis
Lettered by Dave Sharpe
Colored by Alex Sinclair
At last, it’s the return of the Legion of Super-Heroes! The greatest super heroes of the 32nd century have traveled back in time not just to meet the heroes who inspired them, but to make an offer…but to which hero? And why will that choice tear Superman’s life apart? Plus, the fallout from Lex Luthor’s conversation with Lois Lane escalates! What dark secret did Lex tell Lois?

I won’t pretend that I’ve loved every issue of “Superman” since Brian Michael Bendis has taken over. There were one or two issues that I didn’t even like. However, I can honestly say that I’ve never been bored. The character and his entire family of titles feels revitalized. Now with #15, I’ve never been more excited to see what comes next. This comic really sets up Superman’s near future quite nicely.

One thing that I appreciate about “Superman” #15 is that it does away with some characters I don’t exactly love. Namely Rogol Zaar, Jor-El and Jon Kent. Rogol Zaar’s the worst of them, devoid of personality beyond ‘angry monster’. While the new villain might have been a promising idea, the execution of the character (and the surrounding secret history of Krypton’s destruction) fell flat. In this comic, he’s locked up so he probably won’t be around for a while. To his credit, the guy managed to unite the Houses of El and Zod though, there is that.

Jor-El is punished for his crimes as well, sent back in time to Krypton right before it exploded. I don’t care for the modern mad scientist Jor of recent history and much prefer the ignored, heroic prophet of Krypton’s doom. The character’s death, seeing both versions come face to face, was a surprisingly emotional moment. It was quite and somber, a better end than the character might have deserved. Finally, Jon is joining the Legion. I’ve always been sort of indifferent to the Super-Son but making him the founder of the United Planets and moving him to a new setting might just make him more intriguing.

“Superman” #15 also introduces some cool ideas. Over at Marvel, Bendis had some winners (the Illuminati, Secret Invasion, Miles Morales etc.) and he has some winners here too. The United Planets begins to form and Superman is taking on the role of Earth’s ambassador. What will Superman’s responsibilities be in this new role? Will someone take offense to him taking the job? Clark just kind of called dibs. He definitely didn’t clear it with any of the nations of Earth. Another cool idea is the New Krypton that General Zod is building. It’s actually an idea that we’ve seen before. ‘New Krypton’ is a story arc from 2008 that explores a modern-day Kryptonian society. The execution left a bit to be desired in some places but maybe it will be better this time around.

The best idea is definitely the returning Legion of Super-Heroes. Their appearance here mirrors the first appearance of the original 1958 version. Those teens from the future made contact with a young Clark just because he was such an inspiration to them. These heroes come back because Jon’s foundation of the United Planets is so important to their team. Only a few speak here but they’re all bright and cheer and full of optimism. Yeah, they’re a little corny but definitely in an endearing way. You’ll want to see more of them even if you haven’t been that big on the Legion before.

Their personalities comes through in the artwork as well. Ivan Reis does a great job throughout the entire comic but the highlight is certainly the pages featuring the Legion. You can tell from their cheering, smiling faces how excited the teenagers are to witness the very first Unity Day, how much it means to them. The costumes all look great too. Some of my personal favorites are the ones on Lightning Lad, Timber Wolf and Brainiac 5. Each costume is unique but are also cohesive at the same time. They are all vibrant, colorful designs that denote a bright, shining future. In “Superman” #15, the end of the ‘Unity Saga’ is really a new beginning.