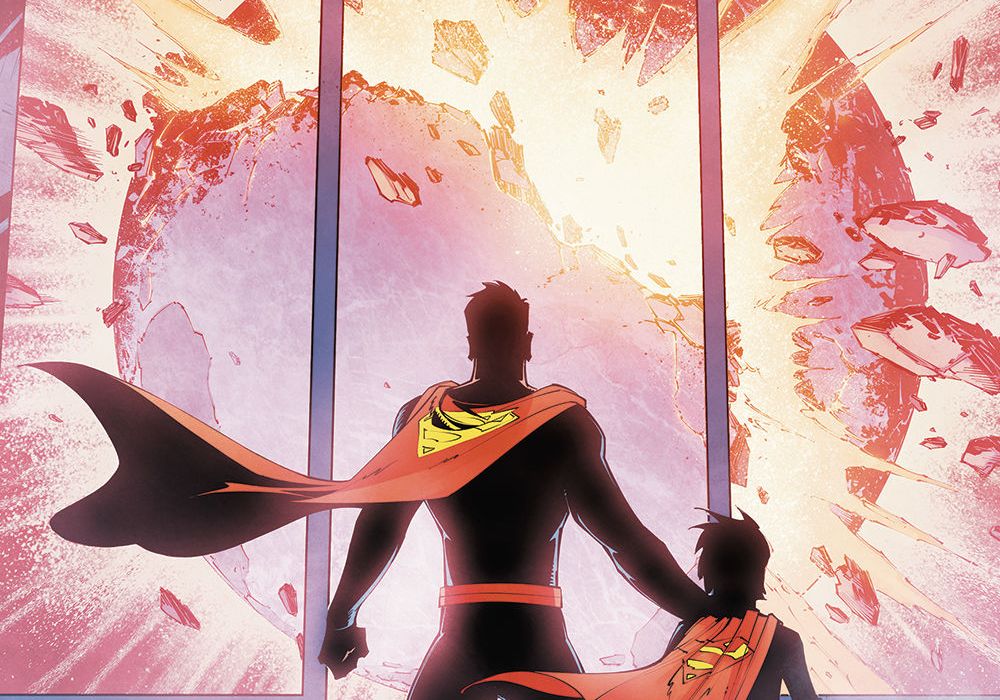 After a couple expansive storylines and bombastic arcs, Superman’s traditional ongoing comic book is going back-to-basics and embarking on a more classic storyline with ‘Suicide Planet.’ Series regular artist Doug Mahnke is returning to the comic alongside veteran DC writer James Robinson. While only having some of the classic Rebirth “Superman” creative team is strange, Robinson has proven himself with an impressive roster of work over the past few years. How well does Robinson fill the shoes of regular writer Peter Tomasi and will this entry into the ongoing title can prove inconsequential or even redundant? 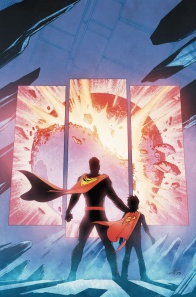 “SUICIDE PLANET” part one! Far away in a distant solar system, a world stands on the brink of destruction, much as Krypton did so many years ago. As Superman and son venture off into space to help, an unexpected adversary stops our heroes dead in their tracks: these people wish to die.

Despite all odds, “Superman” leaps tall buildings (of quality) here and, for the most part, delivers a thrilling story with a couple of intriguing twists. While this entry is definitively a light and airy story, the book keeps up the traditional horror notes and boils them together for a fascinating juxtaposition of tone. In the past, readers have gotten a strange mix of heroes teaming up with and battling Superman include oddballs like Sinestro and Frankenstein. Here, Clark and Jon encounter an alien race, unlike anything you’ve seen this week in comics all thank Doug Mahnke’s incredible artwork.

While the script for this installment is formidable, with Robinson catching the tone and mixing the genres just like Tomasi, Mahnke’s art truly shines when he’s drawing the strange alien designs for the different characters. The ongoing takes three genres and tosses them in a blender Mahnke is able to work with a manner few other artists can capture. This installment, in particular, adds a lot of detail to the surrounding environments and alien creatures.

In addition to the strong aliens and well-drawn moments with Clark and John, the action in the title is fluid and dynamic. Watching the way Mahnke intersperses the scenes with the aliens and the regular human anatomy makes for an interesting juxtaposition and a well laid-out page which catches my eye in nearly every scene here. When they first approach the planet and see glowing eyes and strange technology, Mahnke relishes the moment and makes the most of the page. However, the art in the issue is not perfect. The biggest problem comes in the first couple pages when Superman and Jon are supposed to have a tender moment but strange facial expressions and dynamics break up the tone Robinson is trying to achieve with the scripting.

Even with a difference in creative teams, Robinson retains the tone of the storyline nicely, giving some strong characterization between Clark and Jon Kent. Telling a story like this which is stripped down to only what an essential Superman plot is can be tricky. One of the huge drawbacks in the plot is the cocky way Clark comes off when he addresses the aliens, because of his status as an icon, it can be difficult to characterize Clark Kent properly. Robinson makes a mistake in tone by portraying Superman as someone who is so unabashedly firm about saving people who are completely uninterested in being saved. Even if Superman is trying to do the right thing, he seems to be undertaking the challenge in a really hot-headed, confrontational manner by proclaiming he will not allow the alien race to die like they want too.

Kent should have taken the people who to be saved and given the species the freedom to embark on the path they have chosen. There’s still something heroic about saving people who don’t want to be saved, but this doesn’t mean you have to be a jerk about it. While this issue definitely has a big shortcoming, Robinson deserves a heap of praise in his solid understanding of Kent’s relationship with Jon. The two have a really strong dynamic and neither party really talks down to each other. Robinson can fall into some trappings like when he has Kent dispute whether he wants to take Jon to the Suicide Planet but the broad strokes and the overall tone of the comic is there and it feels right.

For an arc featuring a different writer, “Superman” #40 is an impressively cohesive addition to the overall vision of the comic. The story has a beautifully fleshed out scope despite having a relatively simple narrative. Due to some of the insane artistic feets, I can’t wait to pick up the next issue and start to see if or how the Kent’s can save a planet that doesn’t care about dying. With a rough 2017 behind it, “Superman” has the chance to shine brightly in the new year!