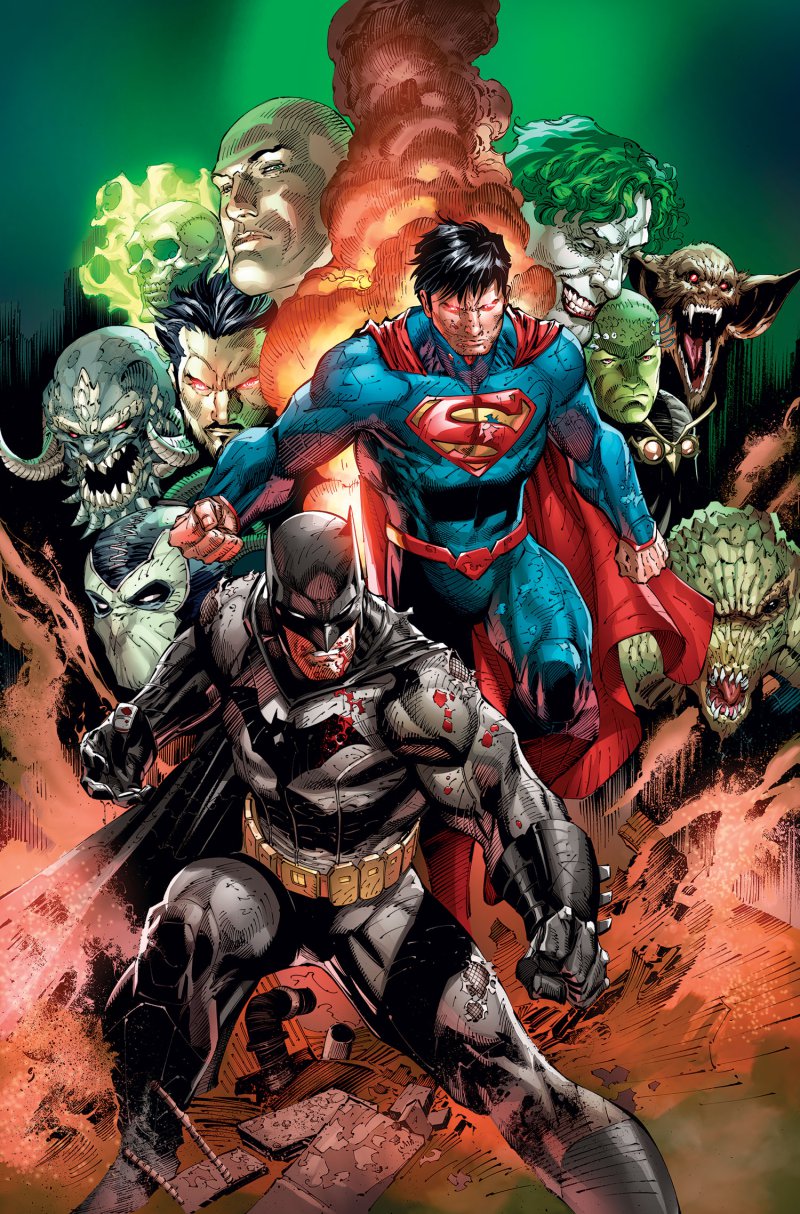 The Phantom King has been defeated, but that doesn’t stop him from sending a whole team of Gotham City baddies to fight a depowered Clark Kent in “Batman/Superman” Annual #2 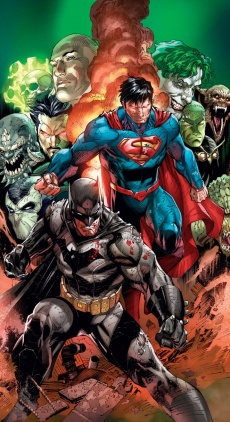 Superman and Batman have defeated the menace that was targeting the Man of Steel for months, but not before he set something deadly in motion – their greatest foes have been given the means to kill Clark Kent. And for Clark, time is running out.

Doomsday and the Phantom King may be gone for the time being, but the impact of the damage they left in their wake is still being felt by the non-powered inhabitants of the DCU. Superman has followed this trail of ruins back to the Honeymoon Islands in the Bahamas, where people are literally digging through the rubble to find much need supplies for their community. Superman, always eager to help, prepares to roll up his sleeves and sneeze away some debris when THE MAN-BAT ARMY ATTACKS! While Superman can handle one bad guy on his own, he doesn’t know that a proverbial who’s-who of Gotham City’s most wanted are flocking straight his way.

This issue functions as a post-script for Greg Pak’s most recent arc, where Superman faced Xa-Du, the aforementioned Phantom King, and (SPOILERS) banished him to the Phantom Zone. And while the Phantom King is trapped in an appropriately named alternate dimension, this just gives Xa-Du the opportunity to unveil he most conniving plan: he’s going to think at Superman really hard. Or rather, think at Killer Croc, Bane, Cheshire and enough Man-Bats to fill up the Bat-Cave with guano in a couple of hours.

I hope that my tone is not too sarcastic, because in all honesty this issue is a lot of fun. The set-up is very simple, which, combined with the extended page length, give Pak enough room to play around with these characters. He has a firm grasp on the Man of Steel and the Dark Knight, so it’s easy for him to hit all the major tenants. Superman thinks with his heart and likes to smile, Batman thinks with his Bat-Brain and wears a permanent Bat-Scowl. Pak has explored the more nuanced areas of their relationship in the past, but that is clearly not his goal with this annual.

This issue is really an opportunity for Pak to play around with the effects of Superman’s new solar flare power (courtesy of Geoff Johns), which leaves him with zero-powers for 24 hours after use. This puts the de-powered Clark in the position of having Batman swooping in to save the day when Clark can’t even muster up a super-poke. Pak definitely milks this situation for the most amount of possible humor, especially when Clark insists that Batman was fighting alone, only to find himself tied to a pillar with an incredibly sour look on his face.

It impossible to talk about the artwork in this annual without mentioning that it features the work of not one, not two, not even three or four but five different artists. While it’s not uncommon for annuals to have more than a single artist, it took fewer people to make Led Zeppelin II. That being said, the art is not the complete smorgasbord of conflicting styles that it surely could have been. They picked a group of artists who all pencil images in a more realistic style, a la Jim Lee and Rags Morales, so at least it doesn’t look like McKean mashed together with Miller. Clark does sometimes get a new face in between panels, which is slightly jarring, but you can still keep track of the guy with the straight jaw and hair curl.

One thing that all these artists have is that some of these body proportions are getting ridiculous. Like borderline Liefeld-circa-’95 level of bicep bulge. It’s hard to look at the image of Bane and Cheshire walking through the jungle and not think of those old “Youngblood” covers.

The credits don’t indicate which artists penciled which pages, but if I could hazard a guess there’s probably an artist switch when the story changes location from jungle, building, rubble and more jungle. All of these locations have a good amount of detail, from twisted vines to cracked concrete, and nothing looks too rushed. There are some stand out splash pages spread thorough the action scenes, like the first Man-Bat attack, the villains entrance, and especially (SPOILERS) Batman riding Killer Croc. That’s the kind of issue this is people, so just relax and enjoy the ride, no pun intended.

This issue would make a great level of a video game, and I don’t mean that in a condescending way. It really feels like it would fight into Batman: Arkham Origins, with the multitude of villains and fun action. It’s very well-paced, never really lags and there’s always a fight about to happen. The only glaring bit of exposition is when Batman quickly gives the reader the barebones backstory of each of villain, and we set the 14756th recreation of Bane breaking Batman’s back. At least the extra pages of the annual ensure that this doesn’t throw off the flow of the story.

This story doesn’t stretch the nature of Batman, Superman or their relationship, and it doesn’t really try to. Not every interaction between the two needs to devolve in a grim debate over the relative merits of instilling hope or fear into the minds of humanity. Sometimes they can just have an adventure, while remaining true to their traditional roles. Readers looking for a strong continuation of the previous arc will be disappointed, as the Phantom King disappears after the first pages, but at least it acknowledges the fact that it can’t be easy to clean up after these big super-fights.

Pak has written a perfectly decent story that’s full of fun action and adventure, while remaining true to the traditional roles of Batman and Superman. It’s not the most original or unpredictable story involving these two characters, and it really makes no claim to be so. The art team gels together surprisingly well, although it’s apparent when the switch happens mid-scene. The action scenes are all penciled very well, and it doesn’t devolve into a blur of fists and kicks. It is nice to see Batman developing a begrudging respect for Clark sans powers, and Pak even manages to get a rare smile to appear under the cowl.

Final Verdict: 7.0 – Far from being the most original story ever featured in this series, but still a perfectly decent issue filled with fun action and impressive images from the five(!) different artists. Expect some traditional Batman/Superman action, and not much else.