Working as an anthology of sorts, “Superman: Heroes” #1 offers multiple glimpses at DC’s heroic community, as they react to Superman revealing his secret identity to the world. And, as other similar issues, the mileage varies among the different short tales. 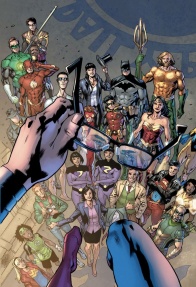 Lois Lane, Jimmy Olsen, the staff of the Daily Planet, even the Justice League-their lives all changed when Superman revealed his secret identity to the world! This unique Superman experience explores what the identity of Clark Kent meant to those close to him-and what their relationship to Superman will be in the future. All the rules are about to change-and it all starts here.
The dream team of writers Brian Michael Bendis, Matt Fraction, Greg Rucka, and Jody Houser team up for this amazing special, with art anchored by DC legend Kevin Maguire, plus sequences focusing on each corner of the Superman universe by artists Steve Lieber (Superman’s Pal, Jimmy Olsen) and Mike Perkins (Lois Lane).

When the greatest hero of the world reveals his identity to the public, everyone stops and listens. Bendis has been crafting this story on the pages of “Action Comics” and “Superman,” culminating on the recent “Superman” #19. After that, this special and the subsequent one focused on the villainous community, play with the fallout of such reveal.

“Superman: Heroes” #1 is divided on clearly delineated segments, with an overarching thread by Bendis and Maguire. As such, this review will also be divided on those same segments, and the different creative teams of each of them.

The opening ‘Prologue’ segment is a heartfelt tale of a young Clark Kent, years before his emergence as Superman, dealing with the hardships of always holding back on his school years. It is a sharp script, if a bit generic, as Clark and his father Jonathan discuss the importance of using one’s powers (with great responsibility), but without losing its essence in the process. More than the story itself, the ‘Prologue’ is a solid opener for the issue, and one that works particularly well for another piece further down the line. The attention to facial expressions is critical, as this part is fully devoid of action and is able to transmit a lot of emotion.

The following part, by Bendis and Maguire, works as the alpha and omega of the issue. On the earlier part of the issue, it serves as a platter to a large number of DC heroes presenting their views, in very short form, through a gathering at the Hall of Justice. Maguire’s penchant for brilliant facial expressions shines through, and most of the character reactions are spot-on. Some, however, and especially for long-time fans, might feel off, and somewhat forced to deliver a bit of exposition that feel strange on their mouths.

If that is true, the next segment, focused on a Booster Gold gag is nothing but excellent. Completely turned on the comedy, and using time travelling logic to its advantage, it is one of the most amusing pieces of the anthology. An obvious joke, but one that hasn’t been made yet, and that is executed perfectly.

On a far more sober note, the story with Batman and Wonder Woman (or, rather, Bruce Wayne and Diana) is another highlight. Similar to the double-date issue on Tom King’s “Batman” run, this issue explores the differences between Superman and Batman, and how their world view make the current situation of exposed identities a crossroads. Having Diana serve as the justice and balance point was a fitting idea, and her sound judgement and ability to see her friends for what they are, was very well written. The art is moody and introspective, and another highlight in terms of facial expressions.

Thematically connected to the Prologue, the next segment sees Superman speaking with one of his school teachers about he, despite all of his power, has never cheated on any exam or challenge. It is meant to be a touching story of coming of age, and of pride through the eyes of a mentor, but it falls somewhat flat on execution. The intent is clear, but it doesn’t go all the way in terms of striking those emotional chords.

The next two bits are very specific character studies, one by Rucka on Lois Lane, the other by Fraction on Jimmy Olsend. While the first seems content on exploring the old trope of letters to superheroes, and how they would work in the real world, the second is a far more emotional narrative. Rucka surely delivers and amusing segment, but it does littles to explore how Lois and Clark will interact going forward. Fraction, however, goes deep into the friendship of Jimmy and Clark, and how special it is, while at the same being trivial for the two extraordinary friends.

Finally, Bendis and Maguire bring it all together for the Epilogue, hinting at things to come as Superman and Lois explore some of the running sub-plots of “Action Comics” and how the scheming of Lex Luthor can affect them all. On other times it could have been a great climax, but it doesn’t stop being confusing, given the broader occurrences on the DCU around Perpetua, Apex Luthor, and other seismic events.

All in all, “Superman Heroes” #1 is mostly a strong issue, with some segments that fall somewhat short. It certainly serves its purpose of revealing to readers how the heroic community is reacting to the Clark Kent reveal, packed in great art.

Final Verdict: 7.0 – While hard to grade an anthology given its multiple pieces, “Superman: Heroes” #1 gets more right than wrong and continues pushing the story forward.