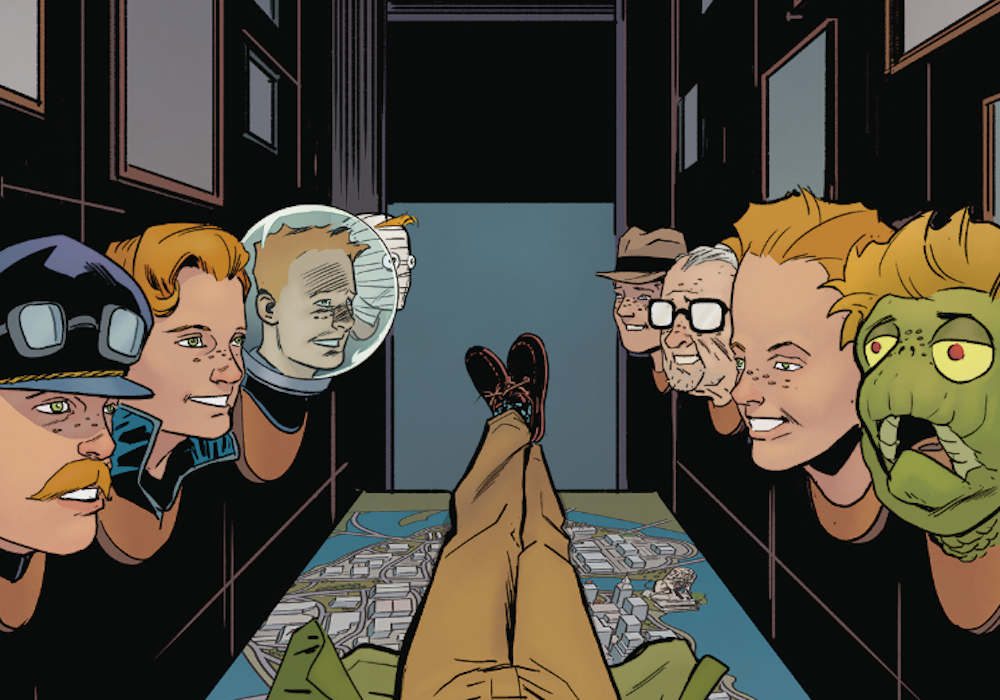 “Superman’s Pal Jimmy Olsen” #1 is a zany, frenetic riff on the character, from his Silver Age hapless hijinks to his more intrepid, serious evolution over the decades. 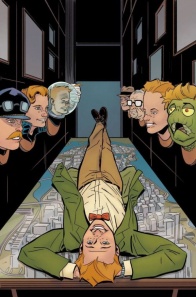 Cover by Steve Lieber
Written by Matt Fraction
Illustrated by Steve Lieber
Colored by Nathan Fairbarn
Lettered by Clayton Cowles Jimmy Olsen must die! Wait, we’re getting ahead of ourselves. Jimmy Olsen lives! Superman’s best friend and Daily Planet photographer Jimmy Olsen tours the bizarre underbelly of the DC Universe in this new miniseries featuring death, destruction, giant turtles and more! It’s a centuries-spanning whirlwind of weird that starts in Metropolis and ends in Gotham City. And then we kill Jimmy.

“Superman’s Pal Jimmy Olsen” #1 doesn’t just rely on Jimmy’s reckless nature and quick talking to craft an engaging story. Fraction and Lieber understand that part of what makes Jimmy Olsen so compelling is the world around him, and that world (mainly Metropolis) is completely bonkers and weird. The team pumps up the surreal while keeping their feet firmly placed on the ground, and they really seem to get that quicksilver quality that makes Jimmy such a good, if occasionally groan-worthy, character.

Fraction and Lieber structure their first issue through a series of vignettes, punctuated with Fraction’s trademark quick wit in both dialogue and narration. The book is a nice send-up of the original humorous tone of “Superman’s Pal Jimmy Olsen.” We’re steering clear of spoiler country, but suffice it to say there are a few familiar (and familial) faces in this first issue. The book opens with a look at Metropolis in days gone – way gone – and we quickly fast-forward to the present, where Jimmy’s cooked up on one of his trademark schemes. It goes haywire, of course, and things get strange from there.

It’s easy to write a Jimmy Olsen comic and take the piss without giving the readers something to latch onto, and Fraction hits a nice balance in this first foray. All the weird storytelling is there, but underneath the impulsive behavior is the real Jimmy: inquisitive, driven and staunch in his beliefs. Fraction clutters the narration nicely with quips, but Jimmy’s earnestness is also on display as he defends his behavior and decisions. We see a lot of this development when Kirby takes over the title to introduce his Fourth World to DC in the 1970s, and it’s also set up well in this first issue.

Superman is his Golden Age self calmed down a bit, with all of the wholesomeness of classic Clark sans his Silver Age predilection for doing weird, hazardous things to Jimmy (like giving him an artifact that turns him invisible, just to see what will happen.) Some of that stuff might be in store in later issues, but for now he’s the shining force of good. Fraction and Lieber sprinkle a little cheese in there for good measure, but he’s intact as a beacon of hope and there’s just the right touch of self-aware humor to give us a chuckle.

A lot of that earnestness is down to Lieber’s art, which incorporates the correct level of homage to Kirby’s interiors and Swan’s cover art but maintains the clean lines of more modern takes. He’s fresh-faced and freckled with some angles to his hair and jawline, and his face is expressive and twitchy as befits his age. Perry is his usual explosive, disheveled self, and Lieber’s Superman gets some Quitely fine-lined detail and a few subtle Kirby angles without feeling out of place. Things get a little grittier in the last short, and the book ends with a delightful cityscape that proves Metropolis might not be the only locale Lieber can depict with such a light touch.

Fairbarn’s colors enhance Lieber’s art and recall the days of 4-color newsprint, but dialed down a little. Fairbarn’s oranges, yellows and reds blend nicely with cool, subtle blues and, later in the book, deeper shadows to bring in just a hint of noir. Clark’s suit is the perfect shade of blue and Jimmy’s hair pops and becomes a focal point from panel to panel, especially when he’s ducking, bobbing and weaving around various threats. Fairbarn chooses a background palette that roots the events of this issue firmly in whatever normalcy Metropolis can muster, and it’s very much a city touched, but not ruled by, the mundane – as it would be from Jimmy’s perspective.

Cowles has a lot of work to do to balance all that narration, titles, sound effects and dialogue in “Superman’s Pal Jimmy Olsen,” and he does it very well. The choice of a straight, no-nonsense font with economical balloons – placed especially well in the newsroom scene – is a good one, because it helps us follow the story without obscuring or crowding any of the characters. There’s a hint of chaos in the vowels and placement at times that works well, and the whole effect is, again, a good homage to the classic books with clean, updated sensibility at work. There’s one big action moment in this issue and the sound effects work well, adding just the right amount of unreality and pop to the ridiculous events therein. Similarly, the titles evoke all eras of Jimmy’s existence, with special font chosen for each, and they accent the page without dominating the art.

Overall, “Superman’s Pal Jimmy Olsen” bursts off the page with quick, witty humor that’s placed perfectly and entirely in line with the book’s roots. Fraction, Lieber, Fairbarn and Cowles seem to understand the character well and the universe even better, and issue #1 leaves off on a cliff-hanger that means just about anything could happen to Jimmy in this run. As it should!

“Superman’s Pal Jimmy Olsen” #1 will be available July 17th, and fans and newcomers alike won’t want to miss this well-crafted take on a classic title.