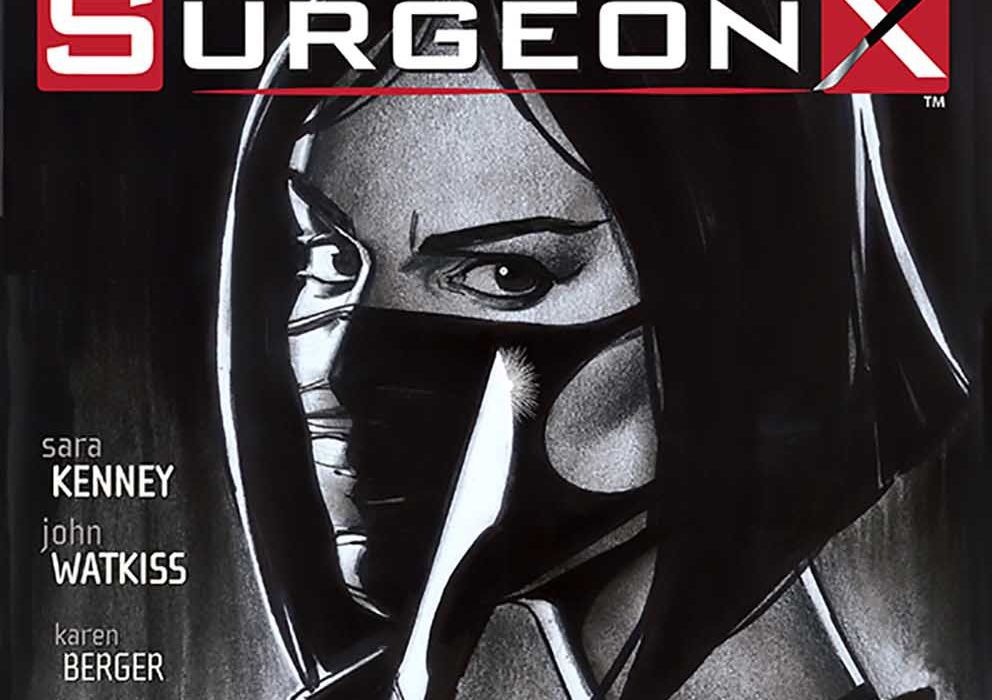 London’s not doing so hot and the only person who can solve the city’s medical crisis is one surgeon and her underground lab. Check out our spoiler-free review of “Surgeon X” #1 below! 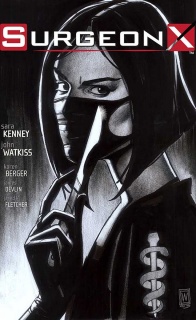 “CUTTING LOOSE,” Part One
What do you get if you cross a far-right British government with an antibiotic apocalypse and a gruesome murder? The birth of Surgeon X and her renegade practice. Extreme times call for extreme medicine.

Just like in real life, the United Kingdom ain’t doing so hot. Not only is there an anonymous like uprising of protestors similar to anonymous (they wear sheep masks so I guess they’re going for some ironic steeple thing) and a series of bombings all around the world, but these are all in response to a new draconian law that limits who can get antibiotics. This law prioritizes medicines to whoever the “most productive” members of society, leaving millions without treatment to diseases that we’d thought conquered for the last century or so. It’s every anti-vaxxer’s wet dream made reality. While violent conflict continues to erupt, notably between the leftist protestors who want to overturn the law and the conservatives who voted all of this into power, surgeon Rosa Scott quits her day job to run an underground clinic helping those who are left in the cold by these new laws. Then she tries to help with some of the nation’s political stuff. It goes all kinds of wrong.

“Surgeon X” lives in a very gray world of morality, one that wraps itself around the ethics of practiced medicine and politics. London is somehow more worse for wear than usual and it shows in John Watkiss’s dour art. The world seems to be always covered in shadow, even in the daytime. But when “Surgeon X”‘s characters are working frantically in the afterglow of a bombing, the warm lights that flicker over the characters create a unique sense of tone that captures the fierceness of this world. And “Surgeon X” is a fierce world indeed, sometimes to its own detriment. Despite how established a carsick world 2036 London is, characters will still go over the top in reinforcing that fact. Like, for instance, when Rosa yells out “She doesn’t stand a chance in this fucking mess of a world” to herself after trying to help a child who won’t qualify for antibiotics. Rosa’s not wrong but moments like this feel like overkill when it’s been very neatly shown how much this world is a fucking mess.

Still, “Surgeon X” #1 packs a lot of story into its first issue, setting up a lot of interesting characters to follow as the series continues. Aside from Rosa, we have her entire family working with her intros new endeavor, including her university lecturer twin sister and her schizophrenic brother who serves as her ambulance driver. If nothing else, “Surgeon X” deserves major props for including a schizophrenic character who’s actually pretty close to what schizophrenic people are like in real life. On top of that we have the politicians working to keep this antibiotics law established and the ones trying to get it overturned. Things don’t go great there.

For a first issue, “Surgeon X” does a lot to not only establish the rules of the world, but the stakes as well. It shows how every part of this world affects its inhabitants, from the kid getting rushed into the hospital after a bombing to the mayoral debate. It feels like a very fleshed out world and one that could conceivably happen. A lot of titles claim that they’re taking in the near future, but “Surgeon X” discusses a lot about antibiotics and the lack of discoveries for new antibiotics that are going to cause a lot of consequences when the bacteria we’re fighting grow resistances to the current crop of antibiotics. “Surgeon X” isn’t just describing a dystopian future off the top of the head, it’s showing its work in to how we could possibly get there.

Final Verdict: 8.3 – “Surgeon X” #1 is a great start to a series that knows what it’s talking about. Unfortunately, it tries to enforce what it’s talking a little too much by doubling down on how sad sack everything is. Still, this first issue does a lot to establish what this world is, who its major players are, and most importantly why this all matters. On top of that, “Surgeon X” functions much less like a “An Inconvenient Truth” style powerpoint documentary, but explains why its problems matter without sacrificing the intrigue of the story.