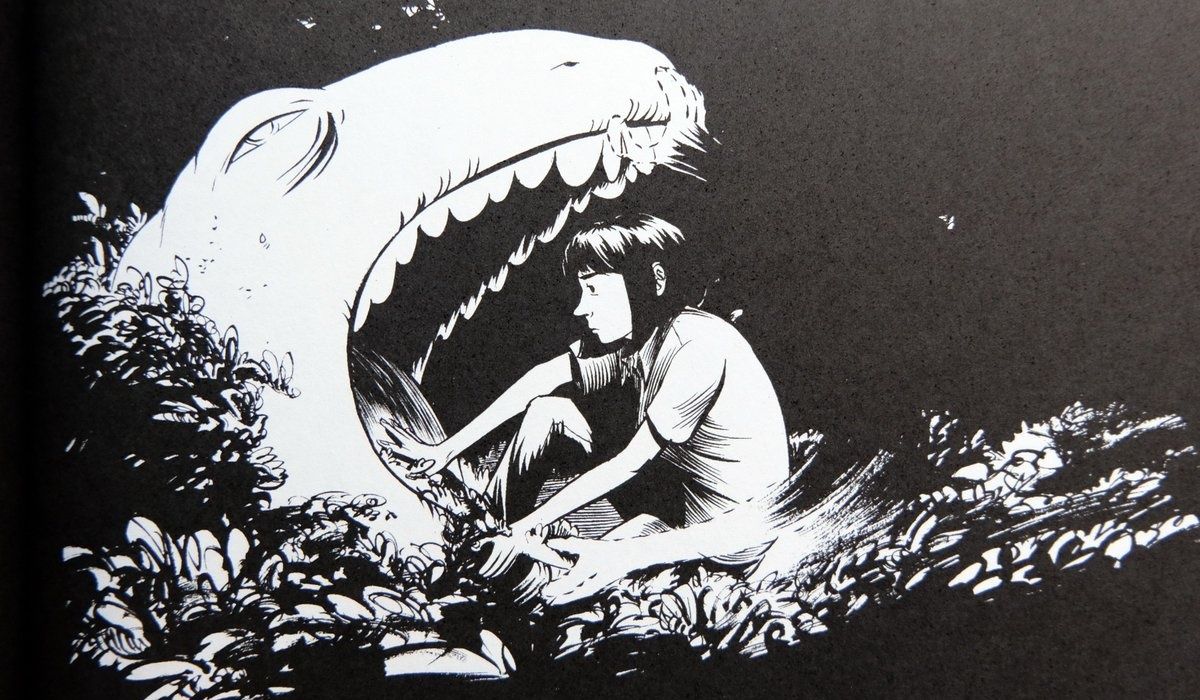 In 2008, writer and artist Nate Powell released a graphic novel through Top Shelf Productions. Winner of the 2009 Eisner Award for Best Graphic Novel, “Swallow Me Whole” is a haunting slice of life drama seen through a fog covered lens that digs into mental health issues, death, drug use, home life, love and more. Partially inspired by the decade Powell spent working with adults with developmental disabilities, it is an incredibly powerful story that is deserving of revisiting and discovery. Mild Spoilers Ahead 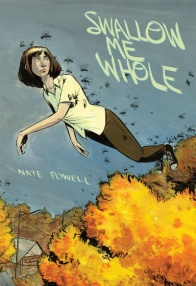 Tween Ruthie is facing a lot. Her ailing grandmother is not the woman she’s grown up knowing. She is seemingly nearing the end of her life and her mental condition has fallen drastically. Suffering from a form of Dementia she sees things that aren’t there, is unsure of exactly where she is, and starts and stops conversations with no understanding of what she is saying or who she is talking to. This is a harsh understanding for Ruthie and her twin brother Perry. The book opens with the family visiting Memaw in the hospital and soon learning that she will be coming to live with the them.

Emotionally heavy from page one, Ruthie’s family assumes this will be a short stay and feel they must do what they can to make Memaws’s final days/months/years as comfortable as possible. We get a look at the family dynamic and begin to really understand who these people are. We also get some interesting, and unsettling moments told through the illustrations. Voices coming from nowhere, odd moments where reality seems to warp, and an ominous feeling surrounding everyone. These reveals seem to just be representations of how grandma is experiencing life, and in ways both Ruthie’s avid imagination, and possibly away for her to empathically be processing what is going on with her grandmother.

It isn’t until we get a moment alone with Ruthie that we learn the truth. She sees and hears things that aren’t there.; picks up on smells no one else does, and these things that no one else can interact with are all in her head. Ruthie is suffering from a form of schizophrenia, but no one knows it. Her family chalked it up to imagination, and when Ruthie realized no one else understood the truth she stopped bringing up these things. So she suffers in silence. We also get a few beats with Perry alone in which he is talking to himself and a wizard pencil topper. Is he dealing with something similar to Ruthie or just being a regular kid talking to himself? He is clearly a creative kid, looking to get away from everyone and write, but this scene could hold a darker truth.

After this opening sequence, the book jumps ahead Ruthie and Perry in high school, and things have not gone as expected. Memaw is still alive, and living with them these 5+ years later. Like most teens, the twins are searching for their place in this world. We also see that life really hasn’t changed all that much in their house. Ruthie is still dealing with her mental health problems on top of the normal teen issues we all face. Perry has a moment in which his wizard pencil topper speaks to him from inside a drawer as well.

The bulk of the book are these quiet moments, but it is the incredibly original way that Powell presents the entire story that showcases its true genius. There are no moments of exposition. Everything is told through dialogue, in the moment. As the reader we are encouraged, and expected, to understand this story exactly as it is presented. Like Ruthie’s world-swirling hallucinations, we move in and out of frame and conversations with these characters. We only see the parts of their lives that are meant as plot building moments.

The internal struggles on display are quietly heartbreaking. That is a big part of this book. It is all so quiet, but inside these characters are tearing apart. That is one of the best things about this story. It isn’t family members screaming at each other for not understanding how they feel. This isn’t a play on the typical Oscar-bait drama. Sure there are arguments, misunderstandings, and a lot of melancholy, but it is presented in a way that feels real, and not flashy. It is the quiet pain that makes this story work.

After we get a little more than halfway through the book, Powell mostly moves away from dialogue and feeds into the story’s emotions and truths solely through his illustrations. Doctor’s appointments, medicine use, family discussions, self exploration, and other self-reflective moments lead to this quiet. While there is still dialogue through the entire book, Powell cuts huge swaths of silence through the second half. For the most part the dialogue in this book is really meant to complete the work, but the art alone tells the story.

Powell’s art is far and away the star of the book. His dialogue is great. It is truthful, real, and thoughtfully worked out, but the way he pushes his story into this world through the pencil and ink is a stand-out achievement. Every panel, day or night, is saturated in shadow. We are either looking through a swirling fog of painful emotion or hallucinations, or a blindingly high-contrast look at these lives. Powell’s inks bleed and invade. There are moments where you feel as suffocated as Ruthie does. The use of insects and creepy, crawling spectral…things is one of the most unsettling aspects of this book. Part of Ruthie’s illness is that she sees flying insects crawling out of the walls, flying through the sky, surrounding her, etc. And she also has a slight obsession with collecting flying bugs like Cicadas and storing them in jars. At first it feels like there could be something more sinister to this, but ultimately it feels like she is storing them to both feel like she has control over this illness, and so she can look at these bugs that have take over her mind and emotional state, while appreciating them as real beings, rather that imaginary monsters. While the bulk of the book sticks to showing standard every day life moments, when it gets weird and unsettling, it goes all in. Even knowing that these things are all in the heads of some mentally ill or mentally failing people, it begins to feel as real for us as it does for them.

So maybe with everything going on in the world, your first choice isn’t to grab an emotional and somewhat heartbreaking tale of the struggles of life and mental health, but this is one of the best original graphic novels I have ever read, and sometimes it is the darker stories that help us through the darkest times. It is art like this book that exists for this reason. This is a book that you can completely understand after one reading, but it does benefit from multiple readings with some time in between. It is a fascinating look at life and mental health that deserves to be revisited more than once. A modern classic that takes the typical ‘life, death, and everything inbetween’ drama and adds its own special ingredients.

For fans of emotional dramas that dabble in supernatural elements, whether real or imaginary in the context of their story. See also: Jeff Lemire’s “Royal City” and “Frogcatchers,” Gabriel Bá and Fábio Moon’s “Daytripper,” Alison Bechdel’s “Fun Home,” or Charles Burns’s “Black Hole.’

Final Verdict: 9.5, “Swallow Me Whole” is a fascinating story about coming-of-age through chemistry with outstanding writing, and a simply incredible illustrated narrative.