Len Wein and Kelley Jones go back to the bayou in Alec Holland’s latest adventure. Check out our review below to see if they find something interesting in all this muck. Spoilers ahead! 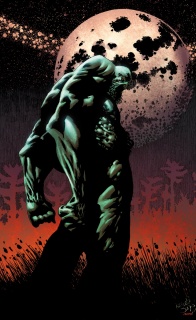 Swamp Thing returns in an all-new series written by his co-creator, legendary writer Len Wein! Swamp Thing has received an ominous warning, and now he finds himself under attack from the forces of dark magic. These are more than just your average monsters—and there’s something much worse looming on the horizon for Alec Holland!

According to popular comics history, Swamp Thing was created by Len Wein and Bernie Wrightson as your typical swamp monster, a Creature from the Black Lagoon type, with a twist. Swamp Thing wasn’t just a monster, he was a scientist named Alec Holland who had been turned into a lurching plant monster by a chemical explosion. Swampy continued like that for a decade or so, Wes Craven even directed a movie about him. Then, some wizard guy by the name of Alan Moore came in, changed the character to actually be a mutated piece of vegetation that only thought it was Alec Holland, and changed comics forever with a genuinely terrifying series that was a mix of arcane magic, horrific violence, and Batman. What Moore and his collaborators created in their run on “Swamp Thing” changed the game for DC and laid the groundworks for future comics like “Watchmen”, “The Sandman”, and pretty much all of Vertigo. And while Len Wein was instrumental in getting the character off the ground and fueling inspiration for his successors in books like “House of Mysteries” and “House of Secrets”, this latest version of “Swamp Thing” just doesn’t have the spark that so many other iterations of everyone’s favorite marsh creature has had.

“Swamp Thing” #1 focuses on the Alec Holland version of the Swamp Thing who was swapped out for the all-vegetable hero a couple years back. Now, Holland stalks the swamps, saving random strangers, chatting with The Phantom Stranger, and being called in to help out some parents whose son enrolled in the world’s crappiest Gen Ed. The comic is illustrated by Kelley Jones, who many fans will recognize from his work on “Sandman” or from the trilogy of vampire Batman graphic novels he created with Doug Moench. Jones’s artwork is perfect for the “Swamp Thing” style but there’s something a little too flashy about the swamp we see in this issue. The coloring, done by Michelle Madsen, is far too bright and doesn’t really give off much of a horror vibe. And even though there’s some nice moments, like Swampy staring down a couple while lit by a campfire, are offset by just how much of a superhero comic everything feels. Swamp Thing doesn’t feel like a plant creature so much as a huge muscle guy who just lives in the wilderness and fell into some leftover Nickelodeon slime.

The inconsistent tone in the art matches up with the story. The couple’s kid turns out to have enrolled in a university where one of the classes required a student to be murdered so they could be brought back to life. There’s a line about it being a “New-Age Self-Motivational” schools but that could describe literally any university. At least he didn’t have to pay for any textbooks. Yuk yuk yuk. Anyway, the kid ends up getting resurrected as a zombie to hunt down the classmates that let him die and that’s kind of just it. There’s no grater plot around the course, the professor is immediately killed by the zombie offscreen. The university is literally named Crowley University and other than that there’s no hint that there’s anything bigger going on than a poorly explained zombie punching some people to death.

More than anything else, “Swamp Thing” #1 feels like a throwback. After years of being used to “Swamp Thing” getting wrapped up in gigantic mysteries, it’s definitely a change of pace to see Big Green just go after a zombie without any tension. But considering that most of Swamp Thing’s fans came after Alan Moore and company changed the game, I can’t imagine that many fans will give this issue anything more than a passing glance.

Final Verdict: 4.3 – It’s not an aggressively bad comic, but “Swamp Thing” #1 just doesn’t offer anything new to the character’s legacy. Or anything really.