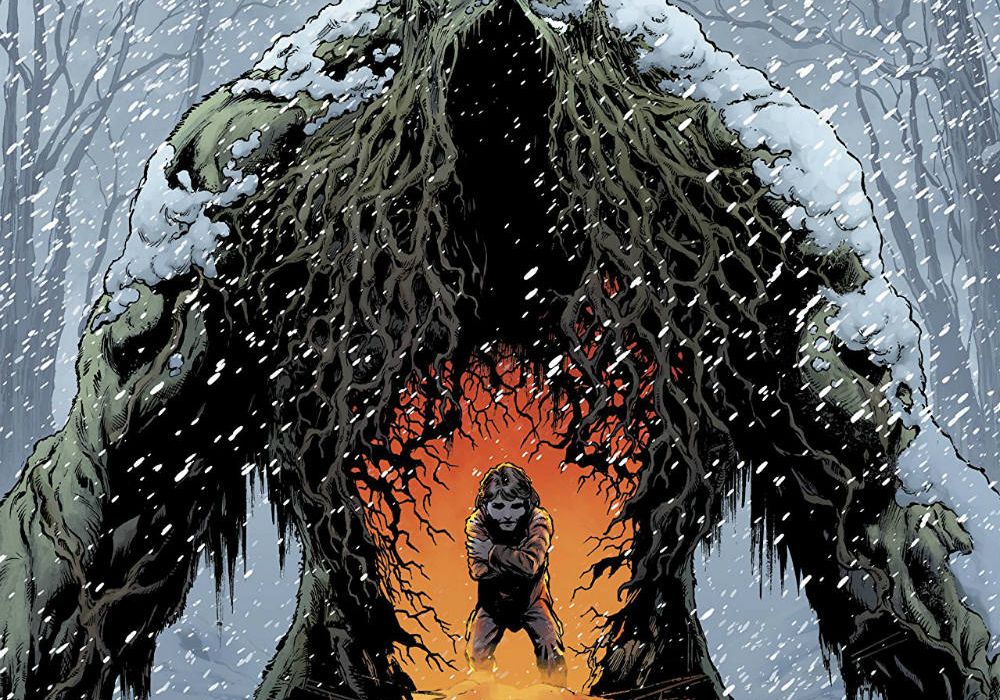 Even though it has only been around a year and a half since Swamp Thing’s last major appearance, it feels like he has been missing for years. He left after going on grand missions and then returning to his roots as a monster of the swamp. How fitting, then, are the stories contained within this special. Spoilers from here on out, although I will do my best to keep them to a minimum. 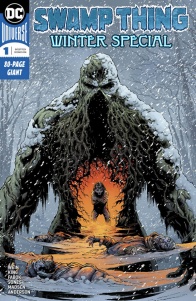 In this new, squarebound one-shot, Swamp Thing is out of his element as he shepherds a lost boy through a blinding blizzard and other hazards of a strange, frozen tundra. In this touching and harrowing tale of survival, the pair must navigate countless threats throughout a bewildering terrain—with a bloodthirsty snow monster hot on their heels. But how long can they rely on each other? Separated from the Green and stripped of his powers in this dead world, Swamp Thing struggles to fight for their lives and deliver the boy to safety. Disoriented and decaying, Swamp Thing’s fading understanding of his surroundings forces the duo to confront their desperation and uncover the true identity of the snow monster that hunts them.

In addition, this special features the final Swamp Thing story from the monster’s co-creator, Len Wein. Originally intended as the start of a new series, it is presented here both in its original script form and with art by Kelley Jones.

There are two halves to this special: the main story and the two halves of the first issue to a new, although now forever incomplete, Swamp Thing mini-series. The main story, by King and Fabok, does most of the heavy lifting of the issue, as the second half is more of a look into what could have been as well as a tribute to the late Len Wein. I’ll get to that later in the review but for now, suffice it to say that I found the tribute touching and also the kind of thing I love about comics – the peek behind the curtain and the different processes with which every creator participates in.

But enough waxing poetic. Swamp Thing. Monster or Man? Does it matter? What is a monster anyway? These are the question that Fabok and King concern themselves with in the “The Talk of the Saints.” As with most of King’s writings, the dialogue, and narrative captions, and the art act as compliments of each other. His dialogue, as is apparent here, is oftentimes choppy, punctuated with many pauses and repetitions and inflections of hesitation. In short, the dialogue mimics our speech patterns, it is a cornerstone of realism in a world of swamp monsters and sudden winters.

Whether or not this works for you depends on your philosophy on what the dialogue of an issue should do. Should it clarify the events of the art? Mirror it without ever directly addressing the actions of the characters? Or should it be the driving force of the narrative, with the art acting as subordinate to the words? For King, across all of his books, he chooses to let the dialogue sit on its own, to feel realistic, to feel partially empty. He chooses to let the art do the work and as such, his stories oftentimes hinge on the strength of the artist to sync up with the tone of the story and his dialogue.

That is certainly the case here and Fabok delivers an issue rife with slow, somber, morose imagery, harkening back to the early days of Swamp Thing, of the question of whether or not he is a monster and what it means to be a monster. What we get, though, is not a heady, philosophical look at what makes a monster but instead a tale focusing on two people, Swamp Thing and the Child, trying to survive in a wasteland that seems to have robbed Swamp Thing of his ability to make and retain memories.

As I said before, this is a slow story. Fabok slows down time for us, making events that other artists would show in one panel take two pages and eight panels to show. This tone is set from the opening pages as we follow a leaf fall across four panels on the first page, bathed in the sunlight streaming through the trees, before coming to rest upon the floor of the swamp. Then, on the next page, we see the sun soften and start to disappear from panel one to two as fleks of snow begin to fall. By panel three, the swamp and the leaf and the radio speech bubbles are covered in a layer of snow. By panel four, all we can see is the top of the leaf and two half covered speech bubbles from the radio.

Then, on the next page, Fabok and Anderson paint four panels, in much the same way that the leaf fell, of Swamp Thing walking through the harsh snow and wind, hunched over, as if he’s carrying something precious. They could have just shown us a pure white panel, repeating with short lines and circles to represent the snow but instead we get four panels of shifting wind patterns, of blues and blacks and whites all mixing to give depth to this storm. To convey just how bad it is. You can feel the cold in your bones just reading these pages. The storm is both sudden and gradual, harsh and unforgiving yet not without remorse.

As with the dialogue, there is a repetition to the art and the sequences that accompany it. It rhymes, as George Lucas was fond of saying, with each new iteration of the boy saying the snow monster is coming and Swamp Thing saying he will protect him from a thing he cannot remember fighting or seeing before asking us to question what is different this time. What has changed or, perhaps more importantly, what has not.

Fabok’s art skills go beyond just the paneling and careful control of pacing but to the visuals themselves. Everything is clear and highly detailed. Even when the snow is meant to obscure our vision, we can always make out just enough details to feel like we are there, standing in the snow, watching as Swamp Thing struggles to save this boy from the never seen monster. He has a control of clarity that makes this story a joy to read and to follow.

If Jason Fabok were to be given a Swamp Thing ongoing, I would not object in the slightest.

I have spoken at length about the opening pages now and, while I said there would be spoilers, I feel like this is a story that should be experienced. There is no great twist, even though there is a mystery, as it is simple to figure out if you pay attention early on and if you know the lesson of the Swamp Thing. That is not what the story is about, the twist. It is about monsters and what it means to be one.

While I have spent a lot of time praising this story, I do have a problem with the narrative trajectory that King sets and the concluding frame. We never learn the identity of the snow monster, why it was there or what it wanted. We have bits and pieces, crumbs that come together to paint a fuzzy picture. All we know is that by the end, the monster has been vanquished. But then we get this frame of the radio sports commentator and it doesn’t quite gel with the story we’ve just been given.

Maybe it’s because I don’t understand football too much or maybe I just need to read it a few more times. Maybe the attempts at realism in the dialogue obscured the meaning too much. King tries to juxtapose the announcer saying there is no monster that takes over and makes you do bad things, in this case lose a game. Instead, there is only the monster inside us all, the one who makes us falter is ourselves. I don’t know if I buy it and I don’t know if Swamp Thing’s story is meant to negate this radio announcer or to bolster his opinion.

That lack of clarity of intention holds this story back from achieving its full potential. That being said, this is a story that is a near pitch perfect Swamp Thing story. Contemplative, morose and while it is not infused with the horror of Wrightston or Kelley’s art, it has a tone all its own.

I’ve talked a lot about the main story so let’s quickly touch on the thing that boosts the page count, and the price, of this issue: Len Wein’s final script. I, personally, find this addition to be worth the price increase and added page count but I can see why others would disagree. We get the full art for the first issue of a continuation of Len Wein and Kelley Jones’ previous Swamp Thing mini-series as well as the complete script for that issue.

I love process stuff so getting to see how Len Wein constructed his issues is wonderful. This is a man who had been in comics for many, many years and it shows in his scripting method. While he was a writer, his scripts show that he relied heavily on his artist collaborators but not for a lack of skill. He trusted the artists to do what was necessary to create the pages that reflect what he wanted to show.

That is also why the art has no lettering, no dialogue, no narration – they simply weren’t written yet. Len Wein died before he could fully articulate Swamp Thing’s thoughts for his follow up series but Jones and Madsen capture the dark, horrific tone he was going for perfectly. Without dialogue, the art is gorgeous and, while the details and minutiae of the story are lost, the overall story is not. A testament to Kelley Jones’ artistry as well as Wein’s clear scripting. There is much to love about the wordless art, not least of which is a splash page featuring chunky Swamp Thing and long eared, huge, billowy caped Batman. Even if it is missing what makes it narratively complete, this is one Swamp Thing story I won’t be forgetting anytime soon.

So, is this worth it? If you only want the King and Fabok story, maybe not for the $8. I would argue that it is still worth it, even if you don’t care for Kelley Jones’ art or Wein’s scripting. Fabok’s art is strong enough on its own to make this worth your while. If you are into Jones’ art, Madsen’s coloring, Wein’s scripting, 100% pick this up. It is a worthy send off and a feast for the eyes.

Final Verdict: 8.9. I cannot, in good conscience give this a 9.0 or higher due to the incomplete nature of the second story and the narrative flaws of the first. However, this is a special that made me WANT to reread it, not out of confusion but just to take in the storytelling. Do with that what you will.