“Swordquest” burned through a ton of plot in the series’ prequel(ish) #0 chapter. I hope this first issue will be able to reintroduce the base concept of the series and really get the plot going for the comic as a whole. The first installment set up a very interesting premise and a bleak portrayal of lead characters Pete’s life. The protagonist of the comic is starting to get really desperate and the narrative has done an excellent job establishing the high stakes of his diagnosis.

It’s time to really get Pete’s story moving and seeing what other kinds of Atari elements that the creators of the book can start merging into the story as a whole. 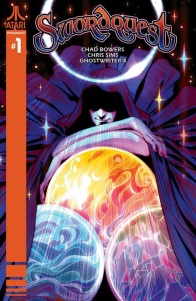 The Atari Age returns to comics with the most unexpected story of the year: SwordQuest! In 1984, Peter Case was on his way to being crowned champion of SwordQuest, set to win the last of four contests and lay claim to a golden sword worth over $50,000! But when the game was discontinued, Peter found himself without a game to finish. Now, over thirty years later, Peter’s stuck in a different kind of game entirely – the game of life – and he’s losing fast. But when he learns that all the prizes meant for the SwordQuest contest of his youth are on display in the World Arcade Museum, he finds an unknown determination that sees him put together a team of like-minded losers for the ultimate heist job – a real-life swordquest! The red-hot team of Chris Sims, Chad Bowers, and Ghostwriter X (Down Set Fight) have a new game – and the stakes have never been higher!

“Swordquest” #1 knows exactly what it wants to be and delivers on the sad-sack nature of Pete’s life beautifully, but the comic forgets that this book is a first issue that lots of readers are going to be picking up for the very first time. The plot is already moving in this issue and readers are going to be a little confused why the first issue of the book reads like a second one. I’m all for opening the plot of a story and giving fans their money’s worth out of the prequel installment of the book, but not starting a story with issue one is a trend that comics need to break out of.

This book has a great tone that is cemented in all of the interactions with Pete and the various interactions he ruins throughout the series. Watching him organically start to break up the extended elements of his life is a great twist on the narrative as a whole. However, it is a disappointment that Pete’s adventures don’t start paying off in this issue. With the diagnosis looming over the story there’s only so much further that Bowes and Sims can drag this character down before readers are going to immune to the narrative as a whole. The Atari brand is on this comic and in the next couple of issues, Bowers and Sims really need to follow-up on the brand and license as a whole to deliver the payoff that fans need. This criticism of the book in general might be proved a little silly if the book starts to veer off in a different direction next issue.

As good as this comic is and has been over the past couple of issues, this narrative is going to be a much better reading experience when it is collected. This is a very personal story of Peter stumbling through life and with the illness and desperate quest to get the sword looming over the story I have no doubt that this comic was made for the collected experience. It’s great that the level of tension pulsates from each scene placed in the book but I just hope that there’s more to this comic than meets the eye.

Ghostwriter X’s illustrated work in this comic ensures that the story is grounded in a very strong reality. In the rare moments that Bowers and Sims throw some of the quirky and supernatural elements at the wall, X blends the style’s black humor with the art featured in the book quite nicely. X gets across the potent emotion in each character very nicely with emotion radiating from each figure he illustrates in this comic. There’s a few narrative tricks as well with books and paper being shown to the audience that toys with the medium of comics in a dynamic manner. There’s level of slight imperfection coming from each illustration that embodies the tone of the entire comic so beautifully. There’s an incredible lettering moment from this comic as well featuring a dog that I won’t forget anytime soon.

“Swordquest” #1 makes a couple of small pacing mistakes that can be fixed in future issues, but I just hope that the marketing materials and covers for this book aren’t misleading. There has to be more to the comic than the personal journey of Pete’s final days. Bowers, Sims and Ghostwriter X already have me sucked into Pete’s quest, but I’m just not sure how much further the character can fall and still keep my interest. “Swordquest” #1 is a great tone piece but it isn’t the beginning of the series and doesn’t deliver on the full potential of this engrossing narrative that the comic has just begun to explore.

Final Verdict: 6.0 – After a strong prequel issue, “Swordquest” #1 stumbles at the gate instead of kicking off what’s next for Pete and the quest.