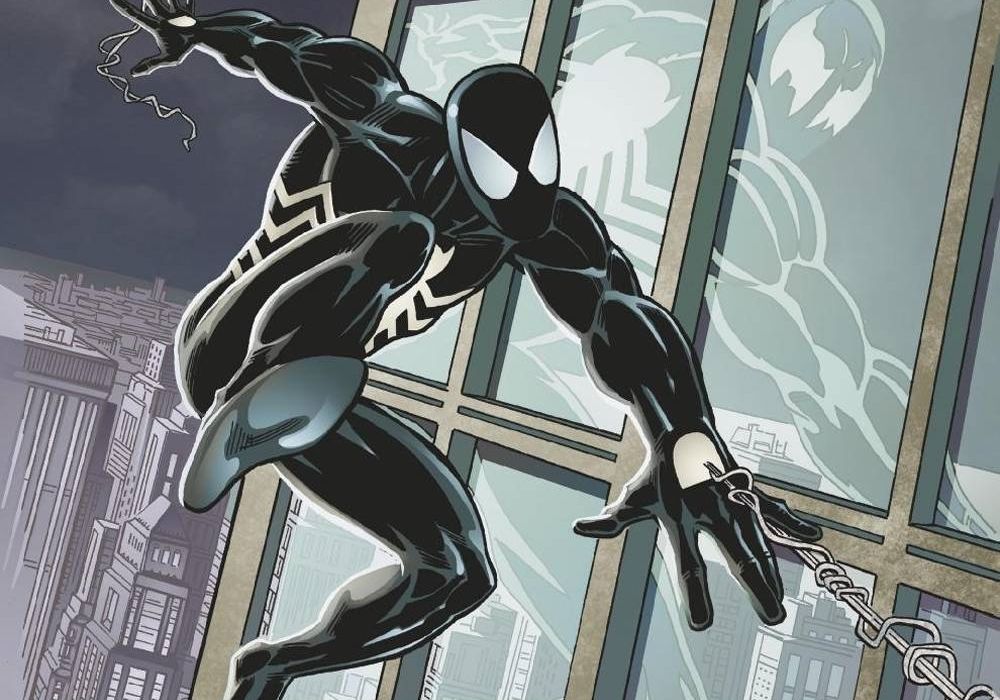 With Symbiotes and Mysterio hitting the spotlight again in films like last year’s Venom and the upcoming Spider-Man: Far From Home, Marvel jumps back in time with “Symbiote Spider-Man” #1. The beginning of a five part mini-series getting readers reacquainted with Peter Parker’s darker moments while gallivanting around Manhattan in the black suit, as well as doing a re-introduction to who Mysterio is as a character. While comic book films will always heavily influence what they’re publishing counterparts will be putting on shelves, if it ends with some quality pages, then everybody wins and it’s definitely worth it. Some Spoilers Ahead. 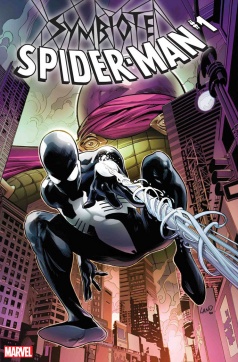 Set shortly after the events of “Secret Wars” Peter finds himself using the new alien suit in his ongoing journey of great power and great responsibility. While he is still becoming accustomed to its unique abilities he is juggling his job, rent, a new romantic relationship with Felicia ‘Black Cat’ Hardy, and battling villains like The Human Fly and Mysterio. The issue opens up with Spider-Man attacking Mysterio in a warehouse, in a violent and dark introduction. Convinced the villain has done something to deserve this retribution, the action and dialogue, both internal and external, prove that there is confusion in both characters as to why things are playing out this way. We then jump back briefly in time to see what events brought them to this fight.

As Quentin Beck, aka Mysterio, is still attempting to become a respected and feared super villain, he looks to team up with an old college buddy with financial ties to the Kingpin. Immediately turned down due to lack of faith that he will ever become a rival to any hero he moves on to his next scheme. Hoping to take his game to the next level, Quentin decides to rob a bank to help finance his quest for evil. Nothing goes as planned in this heist, and it results in the death of an innocent woman. We start to see a desperate and broken man who is beginning to lose faith in himself. Although he uses his ‘powers’ for evil, you can’t help but feel for him in this moment. He never intended to hurt or kill anyone and because he has again rushed into a plan, it collapsed around him leaving only pain and failure. It is at this point that two paths lie in front of Beck and there are true moments of remorse and contemplation of a chance to change for the better. Peter David does some great writing in this issue. He works in a lot of history and detail to make for not only an interesting, unseen story from Spider-Man’s past, but one that effectively dances in and out of the established canon.

While this tragic saga plays out, a black-suited Spidey steals back priceless art from D-Lister The Human Fly. Which brings me to a particular point in this issue. While Secret Wars and this era of Marvel comics were released in the 1980s, we all know that long running comic books need to revamp themselves and change with the times. Characters age to a certain point and then get rebooted to younger versions of themselves to keep the series timeless. It’s how these things go. I don’t see a point in taking this series back to the 1980s in-story. Why cement this mini-series firmly in the past rather than giving it a chance to bridge the two eras of comics smoothly? And to have a battle done on top of the World Trade Center seems a bit in poor taste. Even setting it this in 2000 is going back to far for the age the characters are in it.

I am very much against any kind of revisionist history, and my intention is not to sound as if I’m trying to shy away from any imagery of the Twin Towers, but this is fiction, and a type of fiction that is constantly changed and reworked. I think we could have seen the two characters duke it out on a different building. While I’m mostly unfamiliar with this villain, I did do some digging to see if this was a re-creation of a fight from a previous issue in one of the various Spider-Man titles, but I can’t find it (Let me know if I’m wrong). I don’t want to harp on this too much, because overall it didn’t take away from my enjoyment of the issue. It just feels out of place and unnecessary.

The fight between Spider-Man and The Human Fly is outstanding and it is a credit to David’s script that we only ever see a hint of the darker attitude Peter eventually gains from the Symbiote. There are a few moments where it’s hard to tell if what we’re getting are standard Web-Head quips or an underlying nastiness that is just about to bubble to the surface. When we get to his final brawl with Mysterio, it is clear that he has no time for jokes or a cocky attitude. He is a little angier, or at least on edge. His life and his decisions are more adult.

Same can be said for the amount of force and brutality Spider-Man uses. In both instances, it looks like he is taking things just a little too far. Peter also looks tired through the entire issue and his attitude and feelings towards things are very much on display. This issue handles exposition, deep thoughts and memories as well as in-the-moment dialogue in an orderly fashion. And it moves. Rather than getting bogged down by playing catch up, important details are placed throughout as almost throwaway lines, but they get the job done. Avid readers won’t feel bored, and newbies get just the right amount of info they need to keep enjoying themselves without being versed in all things Spidey.

Greg Land’s artwork is beautiful. With the characters in his hands he seamlessly blends the two eras together. While keeping a more modern Marvel style, he throws in little details like Peter’s 5 o’clock shadow and hairstyle or Aunt May’s ensemble choices that are distinctly how the characters were drawn in the 1980s. His characters are nicely detailed while remaining sleek and organic. The fight scenes are nothing short of dynamic. Movement and action on display not only within the drawings themselves, but in the layout of the panels and pages, make the entire issue feel like movie storyboards. It almost feels alive. With Jay Leisten’s inks adding depth and full shadows, there is a fluidity to the panels that brings life, and not only when the black suit is in frame. Frank D’Armata’s colors are solid and competent. Every page looks great, but nothing aside from the black suit or Mysterio’s costume really scream as something to behold.

As we are once again dragged to the black suit well, it can feel tedious to continuously return to this chapter of Spider-Man’s life, but this issue is handled quite wonderfully. Not only do we get an exciting and emotionally layered story that covers so many aspects of our hero’s and villains’s lives, but it looks great too. You can’t ask for much more than that. With a cliffhanger ending that helps set up the rest of this series, and character histories to boot, this is a wildly enjoyable read that will leave most fans looking for more.

Final Verdict: 8.0, A fun and true to form Spider-Man vs Mysterio story that sets up things to come. Exhilarating action and brooding darkness swirl around like a symbiotic alien looking for a host. “Symbiote Spider-Man” #1 reads fast and looks great.