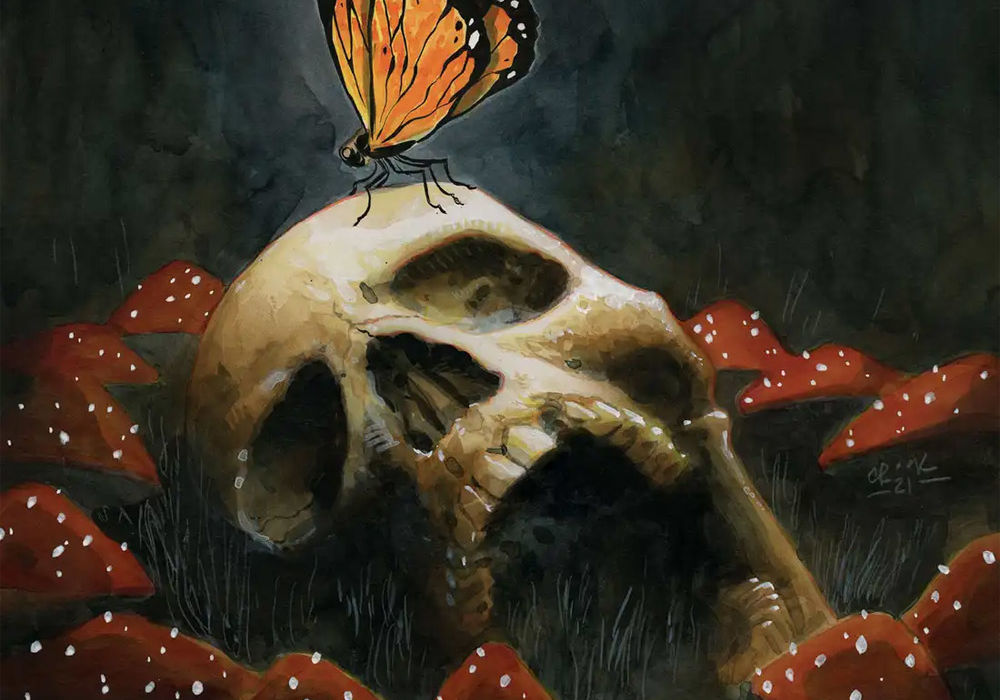 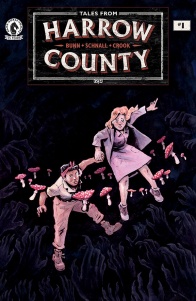 Filled with guilt, regret, and ultimately a lot of questions, Bernice recollects the last time she saw Emmy disappear in the forest. Attempting to recount the situation to her girlfriend, Georgia, Bernice does her best to explain her feelings without hurting the woman she loves. She isn’t fully successful, but it is a fine line to walk. As the opening chapter moves along it does so by going into Bernice’s head space as a reminder of where she’s been and giving us a sense of where she will need to go to find Emmy. There is a good amount of catching up between the material in “Harrow County” and “Tales From Harrow County: Death’s Choir;” and a lot of ground to cover to keep the story going.

Because we the creators and readers have lived in this world since 2015, there is thankfully little in the ways of re-introduction. The story drops us right where it needs us to be. We become well acquainted with Bernice’s current state of mind and the current state of her current life. While Bernice’s feelings for Emmy aren’t romantic, they are deeply rooted in love, admiration, and respect. The fact that Georgia resembles Emmy in her own way speaks volumes as to why Bernice may have been attracted to her in the first place. The idea of a new miniseries focusing on a search for Emmy is a fascinating one. As neat and tidy as the ending for “Harrow County” was, if we are going to continue living here it feels weird to do so without Emmy. So while she is only seen in flashbacks, her presence is felt in every panel. Even if the story ends up going in a direction that leads Bernice and Georgia somewhere other than to Emmy I would imagine it to still be a fulfilling journey and give us further closure for the character. However, I wholeheartedly believe we will see a reunion of our beloved heroes.

Bunn still feels like he knows exactly where he wants to go with this universe without giving away any of the mystery. Usually when an author returns to a fan favorite series, it ends up feeling like a misguided exercise in a sequel/spin-off or *shudders* a soulless cash grab. Thankfully, thus far, “Tales From Harrow County” hasn’t felt like either. This first issue is a true extension of what has come before, feeling like it has true purpose and like the characters exploring a subterranean environment, it is looking to dig deeper into the lore. The script is spacious while still giving us plenty of information and weight. It is really quite an emotional return to the series. The main series always felt pretty heavy with the horror and drama running high at all times. Those elements are still fully at play here, but there is a sense of adventure and the bizarre dry humor makes a triumphant return as well. It’s a nicely balanced first issue.

The romantic relationship adds another level to the entire story too. At first I wasn’t sure if it was really necessary. Did we need Bernice in love with a woman who clearly reminds her of Emmy in some way? If not that, then did we need to see her fall in love with Emmy? Did we need a romantic relationship at all? I also found myself questioning if making it a love story between two women was right for this series, or if it was representation just for the sake of it. I usually err on the side of representation simply because it is so important, and truthfully, who am I to say what is right or just thrown in? It will speak to someone out there that needs it. In the end the romance finds its footing whether it was wholly necessary or not. It works here and while Bernice is strong on her own, having a romantic partner with her on this journey added a certain type of strength that really surprised me.

Like “Death’s Choir,” “Fair Folk” sees a new artist taking over for co-creator Tyler Crook. Newcomer Emily Schnall is a perfect fit for this universe. Her sketchy line work that is never lacking in gorgeous detail and ability to create beautifully muted watercolors makes it feel like she and Crook share a symbiotic relationship. Her craft is an undeniable kinship to his while still being true to her own style and eye. As someone who works in various mediums in and outside of comic books, her talent is an ever-evolving storm of ideas and styles. The character and creature design is excellent here, whether riffing on Crook’s previous designs or bringing something new to life. There is even a dose of Guillermo Del Toro in its fantasy. It’s really beautiful and spoke to my inner child. If Tyler Crook isn’t going to do the art on a “Harrow County” book then Schnall is the right choice.

While “Harrow County” is a perfectly told, contained story, if it must continue then this is the type of story fans deserve to get. Issue one sets up the emotional and fantastical side of things and hopefully the coming issues really delve in the scary and supernatural.

Final Verdict: 8.0 – A thoughtful and intriguing return to the world of “Harrow County.”